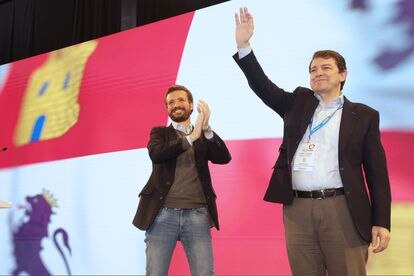 The candidate for the presidency of the Junta de Castilla y León, Alfonso Fernández Mañueco, has challenged Genoa with the composition of his new executive. The popular baron has included as a member of the leadership of the PP of Castilla y León “by direct appointment of the president” – that is, by himself – the former manager of the party who was fired by the national leadership, Pedro Viñarás, and whose dismissal caused a year ago a strong clash between the two domes.

It is the second time that Mañueco challenges Genoa in defense of the historic regional leader whom the leadership wanted to get out of the way, firing him with compensation of 70,000 euros when he was about to reach retirement age. The president of Castilla y León decided to rescue him and three months after his dismissal hired him without notifying Genoa as advisor to the parliamentary group in the Cortes. The national leadership considered that movement as “a clear and manifest disloyalty” by Mañueco, and did not hesitate to take action. The consequence was a file opened for a very serious offense against the PP spokesman in the Cortes, Raúl de la Hoz, who had signed the Viñarás contract. Of the file against De la Hoz, of Mañueco’s maximum confidence (now he is his campaign manager), nothing is known yet. The process could lead from a membership suspension to an expulsion from the party.

The popular baron has made it clear to Genoa that he is not deterred, and has included the former manager in his new executive elected this weekend at the PP congress in Castilla y León. Mañueco wanted to highlight the incorporation in his speech before the conclave. “Thank you very much, Pedro, for everything!” Said the president of Castilla y León from the gallery, pointing to Viñarás, seated in the audience, and received by applause. The deputy secretaries who were sitting in the front row did not applaud those words, according to leaders who witnessed the scene from the first seats. Despite this, in Genoa they prefer not to enter the rag: management sources reject that it is a provocation and downplay Mañueco’s decision.

Tensions have been recurrent between Génova and the Mañueco leadership in the past, although now both parties assure that the relationship has improved a lot and, in any case, the campaign for the elections on February 13 leaves them in the background.

Last year, Mañueco came to fear that the national leadership wanted to make him bedridden when, in the midst of the provincial congresses, several critical leaders from Salamanca met in Genoa with the general secretary, Teodoro García Egea, without his knowledge. The president of Castilla y León suspected that this appointment had been orchestrated to prepare a “coup d’etat” and assault the PP of Salamanca, his political house, as a previous step to unseat him. That skein of the PP of Salamanca is so entangled ―whose entire leadership has later been accused of alleged irregular financing in the 2017 primaries that Mañueco won― that the congress of the PP of Castilla y León has been held this weekend without has yet held the conclave of Salamanca. It is the only one of the nine provincial congresses that has not been resolved.

Mañueco did not support Pablo Casado in the PP primaries, and that has always been the origin of mutual mistrust. However, the leader of the PP is also grateful to the popular baron, because Mañueco defended him in the party when he fell as deputy nurseryman for Ávila long before being elected president of the PP. Now, one and the other are united in a common objective that forces ―more or less― to park the differences: to revalidate the presidency of Castilla y León with a clear victory over the left.