Fifa The Best trophies: Robert Lewandowski consoles himself with the title of best player 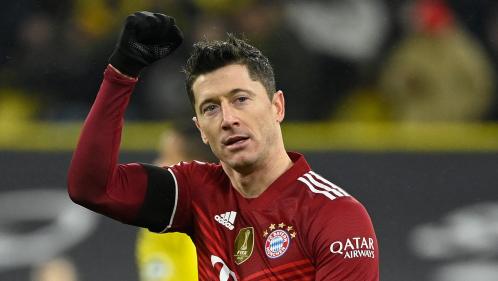 Poland’s Robert Lewandowski retained the title of best Fifa player of the year on Monday at “The Best” 2021 ceremony, partially erasing his disappointment at having been doubled by Lionel Messi for the Ballon d’Or.

The 33-year-old centre-forward has won the trophy for a second time after 2020, after a successful year on a personal level. He won ahead of the other two finalists: the Argentinian Messi (Paris SG, ex-FC Barcelona), crowned seven times Ballon d’Or at the end of November, and the Egyptian Mohamed Salah (Liverpool).

The jury, made up of coaches, captains, journalists as well as supporters from all over the world, was seduced by Lewandowski’s stratospheric 2020-2021 season, author of 48 goals in all competitions.

“I am happy and very honored to win this trophy. I feel proud,” commented Lewandowski, who received the award in duplex. “This trophy also belongs to my partners, my coaches, we all work hard to win matches and trophies.”

The great striker, nine-time German champion, has mainly walked in the Bundesliga with 41 goals in 29 matches, one more than gunner Gerd Müller, who held this record for half a century (since the 1971- 1972) and to which a tribute was paid on Monday during this online gala organized in Zurich.

The Spaniard Alexia Putellas, captain of FC Barcelona, ​​​​won the title of best Fifa player of the year on Monday at the ceremony “The Best” 2021, signing the double after her Ballon d’Or received in November.

The trophy awarded to the 27-year-old midfielder indirectly rewards all of Barça women, crowned both in the league, in the Spanish Cup and especially in the Champions League at the end of a 2020-2021 season. exceptional.

Putellas takes over from England’s Lucy Bronze, a Manchester City player. “I want to thank all my teammates because this trophy is for all of us,” she responded. “This trophy will be a motivation for this year and I hope we will have a lot of success,” she added.

The 2021 title of best goalkeeper has been awarded to Senegalese Edouard Mendy, winner of the Champions League with Chelsea. He is ahead of Italian Gianluigi Donnarumma (Paris SG, ex-AC Milan) who won the Euro with Italy, and Bayern German Manuel Neuer, previous title holder.

Among women, the successor to Sarah Bouhaddi is called Christiane Endler, her now competitor in the cage of Olympique Lyonnais. The captain of Chile, brilliant last season with PSG, is ahead of Canadian Olympic champion Stephanie Labbé, now at PSG, as well as Germany’s Ann-Katrin Berger (Chelsea).

Chelsea can console themselves with the title of best coach, both for men (Thomas Tuchel) and for women (Emma Hayes). Argentinian Erik Lamela received the “Puskas” award for the most beautiful goal of the year 2021 at the Fifa “The Best” ceremony on Monday for his scarf kick scored with Tottenham against Arsenal last season in the Premier League .

Finally, Cristiano Ronaldo, who in 2021 became the record holder for goals scored in the selection, was honored with a “Special Prize” for the striker, author of 115 goals with Portugal.

“It’s a dream, I have to thank my teammates, especially in the national team, with whom I have played for almost 20 years,” commented Ronaldo (36), present in person to collect his trophy.

In September, the Portuguese superstar became the only top scorer in the history of men’s international football by erasing the mark of Iranian Ali Daei (109 goals). He now has 115 goals in 184 appearances since 2003.