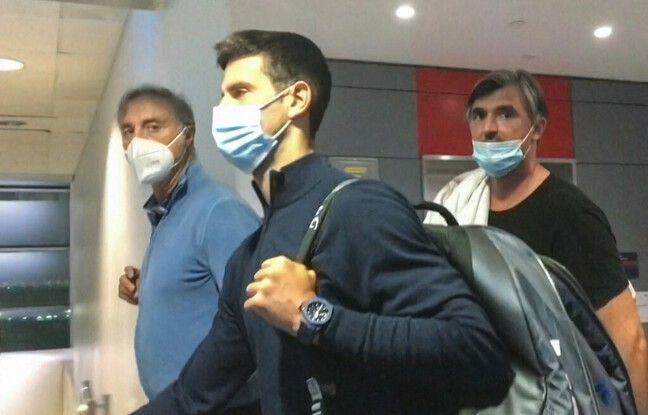 Here, this time it’s folded. Expelled from Australia after a legal battle over his vaccination status, tennis world number one Novak Djokovic landed in Dubai on Monday, shortly after the Australian Open kicked off in Melbourne. to win for the tenth time. The 34-year-old Serb disembarked from the plane, masked and carrying two bags, after landing at Dubai airport at 5:32 a.m. local time, noted an AFP journalist present on board the same plane. He had left Melbourne with his coaches on Sunday evening, his final destination remaining unknown.

This inglorious departure, as he aspired to a 10th Australian Open title and a record 21st Grand Slam title, is the epilogue of an eleven-day soap opera that mixes politics and diplomacy against a backdrop of Djokovic’s opposition to the anti-Covid vaccination. “I am extremely disappointed,” Djokovic reacted in a statement on Sunday. “I will now take time to rest and recover,” said the player, whose career, at least in Australia, could suffer heavily from this setback.

He now faces a three-year ban in Australia, where he has won nine of his 20 grand slam titles. Australian Prime Minister Scott Morrison said “the message sent was very clear”, but hinted that Djokovic could be allowed to return within three years “under the right circumstances”. The ban “runs over a period of three years, but there is the possibility” for the champion “to return in the right circumstances and it would be considered at that time”, he said in a statement. radio interview.

Twice in the past eleven days, the Australian government has canceled Djokovic’s visa and sent him to an immigration detention center, saying the star’s presence could stoke anti-vaccine sentiment, as the variant Omicron is spreading in the country. And twice, Djoko challenged this decision in court, winning a first round but losing the second, decisive, on Sunday. Three judges of the Federal Court of Australia sealed his fate by rejecting his appeal against the cancellation of his visa and his expulsion from the country.

The Australian government welcomed its legal victory on Sunday, in the midst of an election campaign in a country whose inhabitants have endured for almost two years some of the strictest anti-Covid restrictions in the world.

“This decision to cancel has been taken for reasons of health, safety and good order, on the basis that it was in the public interest to do so,” said Tory Prime Minister Scott Morrison. “I welcome this decision which keeps our borders strong and Australians safe,” he added. Many Australians, who have endured prolonged lockdowns and months of border restrictions that separated them from their families and loved ones, believe Djokovic tried to bend my rules, and are happy to see him go.

In Serbia, where “Nole” is considered a national hero, the expulsion has caused outrage. “They humiliated themselves, Djokovic can come back to his country with his head held high and look everyone straight in the eye,” President Aleksandar Vucic got carried away about the Australian leaders. “Despite this scandalous decision, we believe that Novak emerged victorious again,” added the Serbian Olympic Committee.