Tonga: Does the eruption of the volcano generate any danger in Puerto Vallarta?

After the explosion of a submarine volcano Hunga-Tonga-Hunga-Ha’apai, which occurred near Tonga, in Oceania, various variations occurred on the Mexican Pacific coast, such as Puerto Vallarta, Baja California and Colima. 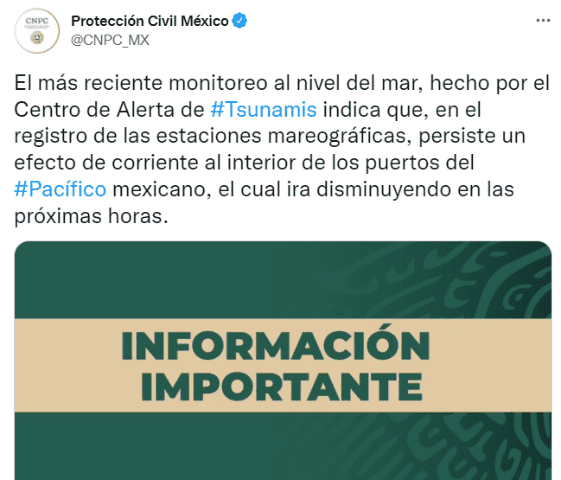 According to the Tsunami Warning Center of the Secretary of the Navy, on the beaches of Puerto Vallarta, in Jalisco, the sea level rose half a meter more than normal, for which elements of Civil Protection and State Firefighters reported that monitoring would be maintained on the behavior of the beaches of the municipality.

But does the eruption of the volcano in Tonga represent any danger for Puerto Vallarta?

As explained by engineer Leonel Salinas, general director of Quake Alarm Mexico, the danger of the eruption generating a tsunami is only for the area near where it occurred, for which the Mexican Pacific coasts, including Puerto Vallarta, are out of danger.

For the rest of the Pacific Ocean, especially on the coasts of our country, he explained, it only resulted in the withdrawal of the water level, which was normal and expected and did not cause damage or invasion of coastal areas, as it did in the areas near the eruption, where the waves reached about 1.5 meters high.

“Due to its relatively low magnitude, tsunami generation is only confined to around 300 kilometers around the event. For tsunamis like the one in Japan or Indonesia to exist in previous years, large events of more than 8 degrees of magnitude are needed, in addition to the event being vertical deformation of the seabed, the sliding of large masses of land into the ocean, eruptions volcanic and meteorite of great proportions. The calculated local magnitude of the event was 5.8 degrees”, explained the engineer.

So far there is no risk that the levels of the beaches of the Mexican Pacific could grow more. In fact, as reported this morning by the Tsunami Warning Center, although according to the monitoring of the sea level in the registry of the tide stations, A current effect persists inside each one of the ports of the Mexican Pacific, it will decrease in the next few hours.