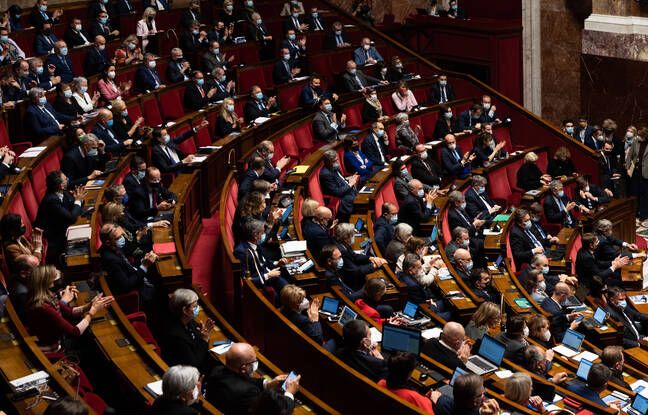 No rebound this Sunday. After two turbulent weeks, Parliament definitively adopted, by a final vote of the Assembly, the controversial bill establishing the vaccination pass from the age of 16. The government wants to see the system enter into force as soon as possible in the face of the “tidal wave” of Covid-19. The text was approved by 215 votes in favour, those of the majority, two-thirds of LRs and a minority of Socialists. They were 58 deputies to vote against, including the left of the left, the UDI and the RN, and three LREM dissidents. Seven deputies abstained.

Two different appeals to the Constitutional Council are planned on the left, to guarantee respect for “fundamental freedoms”, which will postpone the promulgation for a few days.

“What have you done with your souls? »

The French “expect height from us” and “a sense of the general interest”, pressed the Minister Delegate Brigitte Bourguignon, while the Minister of Health Olivier Véran, himself affected by the virus, was absent.

In a last stand, the LFI deputies defended a motion of preliminary rejection against a bill imposing “a digital sorting” and creating “a sub-citizenship” according to them. “What have you done with your souls? “, asked François Ruffin to the majority, the day after new demonstrations in the country against this pass, less important than during the strong mobilization of the previous Saturday.

“The fight you are leading” is “already lost”, given the rush on vaccines, retorted the boss of LREM deputies Christophe Castaner. While some 300,000 contaminations have been recorded daily on average for a week, the government hopes for the implementation of the vaccination pass around January 20.

It will then be necessary to be able to justify a vaccination status to access leisure activities, restaurants and bars, fairs or interregional public transport. A negative test will no longer suffice, except to access health facilities and services.

Main contribution of the parliamentary debate, thanks to the Senate dominated by the right: the new pass will only apply from the age of 16. Minors aged 12 to 15 will remain subject to the obligation to present the current health pass.