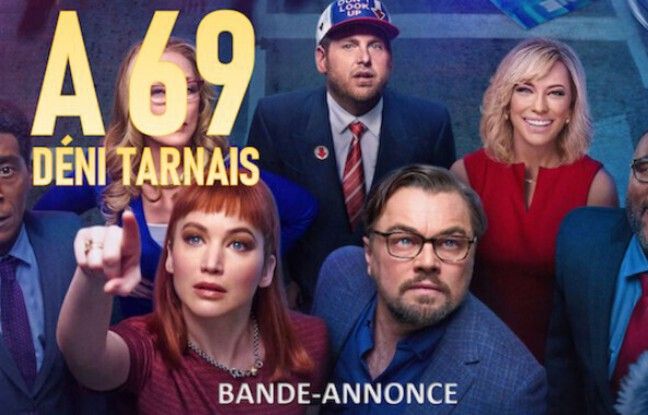 A 56 kilometer long highway is approaching in the Tarn (and Haute-Garonne) to allow you to rush between Toulouse and Castres. This scenario did not catch the attention of Netflix. But for years it has been haunting the nightmares of residents and opponents of
the A69 motorway who consider useless and “ecocide” this toll bitumen ribbon which will save 35 minutes on travel time according to its promoters, barely 10 minutes according to its detractors.

The opponents, who advocate the development of the RN126, the existing road, have specialized in funeral marches, the tag of plane trees or protest concerts. But at the beginning of the year, the La Voie est libre collective decided to rush into the wake of the asteroid of the film phenomenon Don’t Look Up, spinning the analogy with an announced disaster that elected officials do not want see who would favor “private lobbies”. the
diversion of the trailer and its humorous dubbing are successful.

But, “Déni tarnais” or not, the synopsis should not vary. The A69 has the support of the government and local elected officials on all sides, with the exception of those of EELV.

The prospective dealer, the NGE group, must sign its contract before the summer. The first ground works are announced for 2025 and the commissioning of the motorway is scheduled for the end of 2025.