The precious shrimp of Sanlúcar disappears from the fishing nets 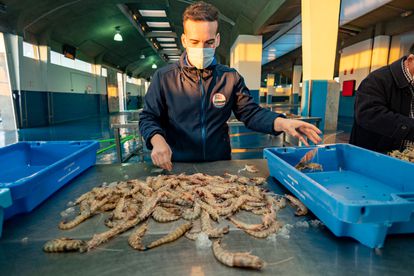 The intense orange of the sunset cuts the landscape from the cliff of the port of Bonanza. The strong easterly wind rocks dozens of fishing boats moored to the dock. Just on the other side of the Guadalquivir River, the last rays of the sun darken the greenery of Doñana. The bucolism lasts as long as José Carlos Macías, technician of the Fishermen’s Association of Sanlúcar de Barrameda, takes to narrate the crisis that grips them: “That is a fishing reserve, the blue crab has arrived and, without a natural predator, it has filled it everything”. The proliferation of this invasive species that, for years, has also threatened the Spanish Levant, is the only explanation that the fishermen of the area find for the drastic decrease in catches of the Sanlúcar shrimp, a famous and increasingly precious species, plunged into a crisis as unknown as it is uncertain.

“In Sanlúcar, in the hotel industry, in the City Council and in society, the concern is very great,” explains Javier Garat, president of the Spanish Fisheries Confederation (Cepesca). What did not even bring the world stoppage due to the coronavirus has happened this 2021. In 2020, the 54 trawlers and 12 purse seiners in the port of Bonanza captured 144,675 kilos of its tiger prawn, which has become a registered national brand and an emblem from the city. Barely 12 months later, the recently completed annual balance of the Sanlúcar brotherhood has closed with a worrying production of just 73,598 kilos. The figures for this shellfish might seem lower in what is the second largest fish market in Andalusia if it weren’t for the fact that it is one of the most expensive items it sells. Of the 24.5 million euros that Sanlúcar auctioned in fish in 2020, up to 2.9 million (almost 12%) were shrimp. In 2021, sales fell to 22 million, of which 2.26 million correspond to this crustacean.

If the economic fall has not been as pronounced as that of catches, it is because the important demand has not stopped inflating prices. From an average auction price of 20.32 euros per kilo in 2020, it went to 30.74 euros last year, with peaks that exceeded 100 euros. But not even for these reasons has the drastic disappearance of shrimp from fishermen’s nets been palliated. “Six months ago we began to notice that it was going down,” says Juan José Palacios, a sailor on the ship Sebastian and William, recently moored at the port of Bonanza on a cold and windy afternoon this January. Palacios carefully separates the crustaceans: the smallest go to one box, the largest to another. It ends quickly, they have barely caught three kilos, only six units arranged in a row have ended up in a batch of the largest caliber. “This is what there is, before we normally caught about five kilos,” says the fisherman. 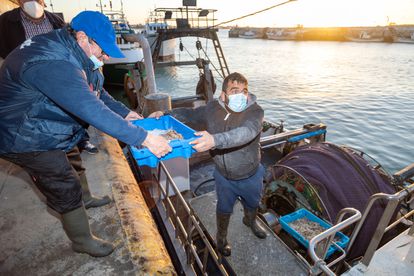 The trawler ‘Sebastián y Guillerma’ unloaded its shrimp catches in the port of Bonanza, in Sanlúcar de Barremeda, this past Thursday. JUAN CARLOS TORO

It is not the first time that Sanlúcar shrimp has experienced a fall in catches and sales. “Over the years there have been cycles,” according to Garat. The smaller fleet at that time and the precision errors in the counts meant that between 2009 and 2011 there was less crustacean fishing, “but the declines were never as pronounced as they are now,” says Macías. Hence, in the face of factors that have been unchanged for years, such as the gradual increase in the fleet, poaching or climate change —which is noticeable in the presence of more storms—, the fishermen only find the explanation in the voracity of a new tenant arrived at the Guadalquivir estuary.

Back in 2013, the first specimens of the blue crab slipped through the fishermen’s nets, an invasive species from Atlantic waters of North America that has been giving problems to the native species of the Spanish Levante for years. And just five years later, the locals were already well aware of the problem that was coming their way. The crustacean is so aggressive and predatory that, with its powerful pincers, it is capable of destroying everything in its path. Especially if your new home is the final stretch of the Guadalquivir estuary, where a fishing reserve operates that prevents any activity other than shellfishing on foot. “There the crab has found a wonderful area to reproduce. It is luxurious, it is fed up with eating and it has no predators”, adds the president of Cepesca. The presence of this new invader in the area interferes with the life cycle of the tiger prawn or Melicertus kerathurus, a species present in the Gulf of Cádiz that, throughout the year, takes advantage of the river and its mouth for spawning and the development of juvenile specimens.

Macías hardly has any doubts that the sudden drop in catches of the Sanlúcar crustacean has to do with the newcomer: “It has already happened with shrimp in the Mar Menor. In Isla Mayor (Seville), they are even eating the red crab, which was also invasive”. The suspicion has to be confirmed with a study that CSIC scientists are developing in the project InvBlue, which has already warned that the area of ​​the Gulf of Cadiz is an area “particularly vulnerable to invasions”. It is different to confirm the cause-effect relationship with the drop in the shrimp population, something that scientist Enrique González-Ortegón is currently working on, through the analysis of the stomach content of the crab. “The information we have today is scarce and not very representative to know what is happening,” says the expert.

But Macías and his people have been waiting too long, since they sounded the alarm in 2018: “Speed ​​is essential with an invasive species. We must take urgent measures on the one hand, and study on the other”. Hence, the Sanlúcar Fishermen’s Association has been demanding for more than half a year that the Junta de Andalucía allow them to carry out controlled blue crab fishing in the reserve areas of the estuary. The idea is similar to that followed in the Mediterranean, where a stable market for the sale of the invader has even been generated, thanks to its powerful flavour. “It will require a special permit, with a scientific experimental plan. That would benefit everyone. Catches at the fish market would increase and it would help to control the species,” says Garat. The Delegation of the Junta de Andalucía in Cádiz claims to be aware of the demand of the fishermen. In addition, he explains that he has already allowed shellfishing of the species on foot and that he is now studying the possibility that it may also be carried out by means of boats that will have to be controlled with a register, limited to specific fishing gear and with the presence of scientific observers, requirements already transferred by Garat to the Administration.

The question is whether the permit will arrive in time to save the famous Sanlúcar shrimp. “There are trawlers [que navegan a distancias de hasta 12 millas] that they are already finding them, which gives an idea of ​​how it is spreading,” says Macías. The technician does not even know how to predict what will happen to the crustacean in the short term and predicts a complicated spring of catches. Meanwhile, the shrimp is already beginning to suffer in the menus and blackboards of the local hotel industry, just in the year that the city has been chosen as the Spanish Capital of Gastronomy 2022 by the Spanish Federation of Tourism Journalists and Writers (Fepet). “I am afraid that the city is going to notice the lack more than the people of the sea,” predicts Macías with a somber gesture.