The parallel universe of Italian anti-vaccines

There is a parallel world in Italy for the unvaccinated that begins in Telegram chats and can end in the ICU of a hospital. A universe made up of some six million people who have decided not to be vaccinated despite the restrictive measures imposed by the Government for those who are not immunized. They cannot go to work, nor travel by public transport. Not even buying socks in a mall, dining in restaurants or having a coffee at the bar. They are the irreducible, the convinced activists. And they are organizing on social networks to be able to survive sheltered in a kind of Matrix before the last turn of the screw of the restrictions, which will arrive from February 15 with mandatory vaccination for all those over 50 years of age.

“Good morning, I need transportation for Flaminia (north Rome) to the center. Thanks”. “Hi all. I travel every day from Ponte Galleria at 7 to Piazza Quadrata”. “We have to help each other if we want to survive this abominable injustice.” These messages are some of the hundreds that are reproduced on Telegram channels such as No Greenpass merchants (addresses of establishments where you can enter without green pass, the green card that is obtained when vaccinated, and which brings together 22,406 users) or MVA-Solidarity Transport. The latter, as Niccolò Zancan pointed out for the first time in The print this week, collects all kinds of citizen initiatives from activists to be able to travel daily without the certificate that can only be obtained by being immunized. Shared cars that work as regular buses between two points: digital hitchhiking. In places like Venice it is even more complicated and some citizens have converted their boats into private transport for unvaccinated people who cannot use the classics vaporettos of the islands. 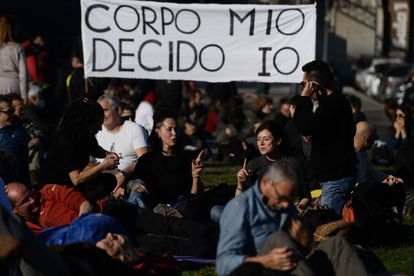 Mario Draghi’s Executive continues to tighten the fence. There is almost no room for a life without a vaccine. The measure that will come into force on February 15 will prevent those over 50 from almost any social and daily activity, including work. But the Government calculates that there are about two million people among this group of those affected who intend to stand firm and who must seek a different way of life. Bordering or skipping the law. Often ignoring that 140,000 people have already died in Italy from covid-19.

Stefano Puzzer, a port worker from Trieste, is one of the Italian leaders of the movement against compulsory vaccination certificates. The capital of Friuli Venezia Giulia, the Italian Adriatic border with the countries of Eastern Europe, became the epicenter of the anti-vaccine movement a few months ago when dockworkers at the port clashed with the police by refusing to show the green certificate to work. He is now passing the covid locked up in his house, but he has been suspended from work since October 15, and tells on the phone: “We live in a totalitarian regime. They are pushing us into a parallel world. And the social networks serve to unite people. At this time it is important that they do not feel alone. We are also creating home cures. They are doctors who realize that this virus can be cured with other protocols and they work. If they had been used from the beginning… You find them everywhere, just get organized”.

Beyond shared transport, these pirate health services that Puzzer describes, or false vaccination certificates on the web, in the Alto Adige region, which borders the Austrian Tyrol, schools have also sprung up for parents who do not want their Children wear a mask in the classroom or submit to measures against contagion. The Bolzano prosecutor’s office investigates this kind of improvised schools in the forest and managed by parents. Ten have been located so far.

67% of those admitted had not been vaccinated

Meanwhile, the ICUs in Italy are filling up again. But this time the photograph of the patients is very clear. 67% of admitted patients had not been vaccinated. The immunized are 33%, but two out of three suffered serious pathologies. The president, Mario Draghi, pointed against them at the last press conference: “A large part of Italy’s problem with covid is being caused today by anti-vaccines.” More forceful was Mario Riccio, head of the ICU in Casalmaggiore (Cremona), one of the areas with the most deaths in the first wave. “Today in Italy only those who want to die die of covid.” But there is a group of people who still deny that evidence.

Davide Tutino is a teacher at the Teresa Gullace public school in Rome. He has been on a hunger strike since January 31 to protest the Executive’s measures. He drinks three cups of broth a day and has not received the vaccine, although he calls it a “drug”. “If someone has faith in an instrument, they don’t force you to pick it up. The obligation is not scientific”, he protests on the phone. He considers that the fundamental rights of citizens and international conventions are being violated. Also that Italy is now a dictatorial state. And he is willing to continue as long as it takes with his fight. Even if it is in the parallel universe based on cups of broth. “You have to organize, disobey together. On social media, yes. But also through activists. If I take a bus and I can’t because of that regulation, there are others according to which the state of necessity cannot condemn me. To go see my mother, to buy… There are networks of lawyers who defend us. We must spend our money, of course. But we are at war. And it’s not against the virus, it’s against us.”

Infections continue to grow (186,000 last Friday). And some are now intentional. Among the unvaccinated who want to access the green pass Invitations to participate in dinners or meetings with positives are also circulating. Covid parties, some call it. A practice that is born from the premise that contagion is less dangerous than injection. And, once the infection is overcome, the person is considered to be immunized for a few months and Italy issues the certificate that allows part of normal life to be recovered for half a year. Federico (he does not want to give his last name), a hotelier in the center of Rome, has survived without getting vaccinated until this year’s end, when his whole family contracted the virus. Now, he explains in his shop, he already has the green pass. A safe conduct that now also serves to leave the parallel universe.