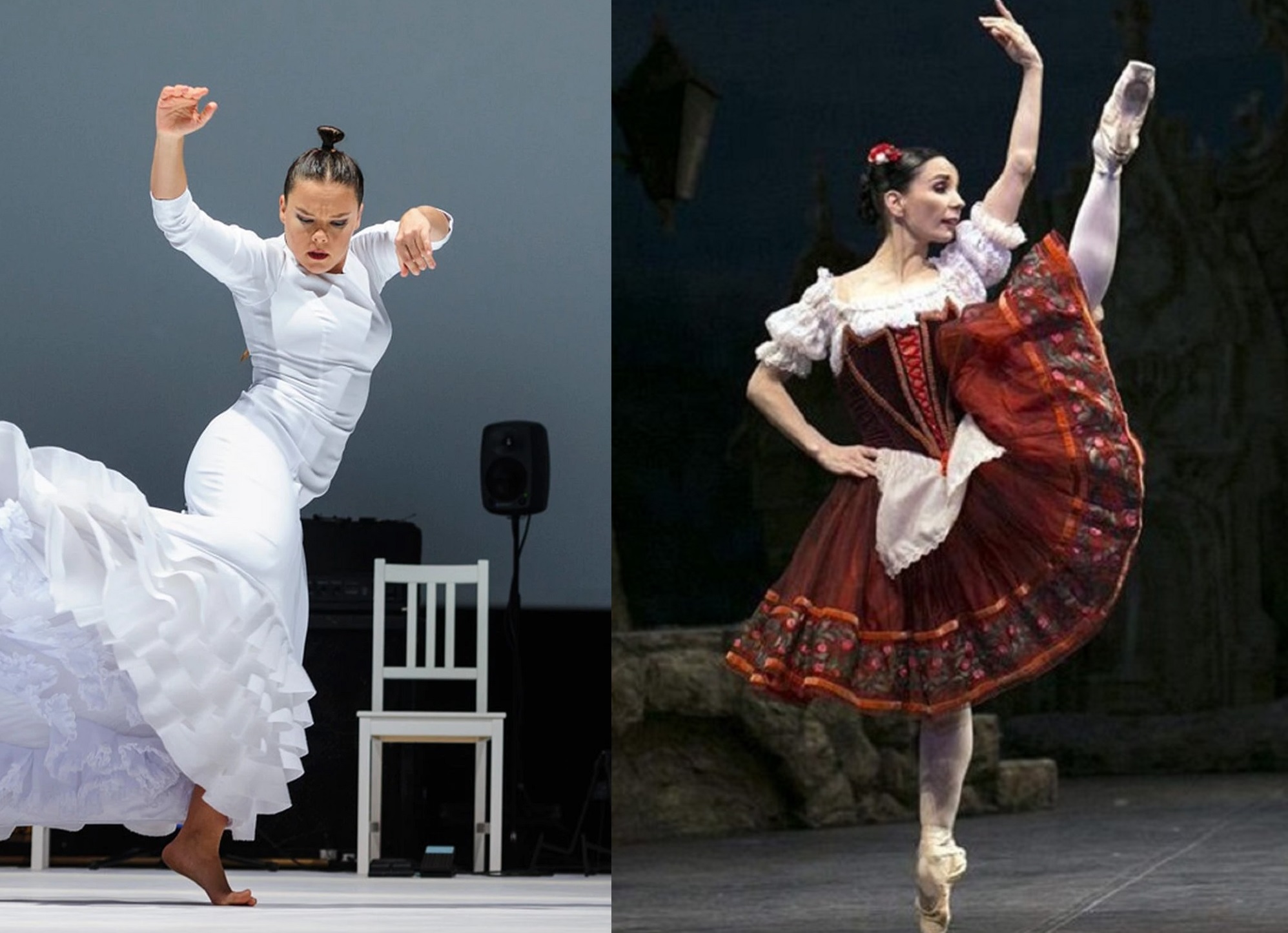 The Amazons are legendary characters in dance; In addition to becoming a brave symbol since the first pre-Homeric mentions and also in the Modern Age, since the eighteenth century we have seen them fight and triumph, group together and unfold on the opera and ballet stages, sometimes with the powerful neoclassical aesthetic of the bare chest, reminiscent of ancient descriptions even sculpted by Polykleitos and imagined by Phidias. But today the Amazons of the dance -which do exist and no one questions and respects them- fulfill another function, war is a very different one: Penthesilea or Hippolyta do not have to deal with Heracles, Achilles or Bellerophon, they are leading women in what is theirs that they go ahead of the others, that they sit in the chair and claim an assumption of real power beyond any decorativeness.

This week, barely 24 hours apart, there have been two important professional news stories starring two Spanish women dedicated to dance who have made headlines: Tamara Rojo (Montreal, 47 years old) and Rocío Molina (Torre del Mar, Málaga , 38), the first academic ballerina and the second flamenco ballet dancer. Due to her indisputable merits and talent, Rojo has been appointed the new director of the San Francisco Ballet and Molina has received the Silver Lion of the Venice Biennale 2022. They are two pikes stuck well beyond Flanders.

The San Francisco Ballet It is the largest professional ballet structure in the United States and it is estimated that it is also the one with the largest budget, with its own prestigious school, even above the ensembles based in New York and Washington; the Silver Lion of the Biennale Venetian distinguishes an emerging dance creator or artist, but already with a firm projection for the future and with sufficient demonstrative work. Rojo will be the first woman to direct a large structure of this type in the United States, Molina is the first woman and flamenco dance artist (and Spanish dance) to be recognized by the prestigious Italian institution.

Rojo has returned in just under 10 years to the English National Ballet [ENB] the splendor of its legendary times and raised the bar of concurrence ―in the sense of strict competition― with the other London-based company, the Royal Ballet, but the Spanish made the ENB look for its own aesthetic, its stamp and its differentiating character. No woman has gone further than Molina in the new performative and theatrical paths of scenic flamenco, that contaminating and eclectic Spanish dance that does not reject experiment and communicating vessels with other sectors of contemporary dance or the more dynamic visual arts. Both women, in their maturity, decided to be mothers and immediately after they rejoined the scene.

Knowing how the administrative structures of the great American ballet companies work, and consulting the lists of the presumed favorites for the position, Tamara Rojo was far from being the ideal candidate to direct the San Francisco Ballet; however, by jumping on rational calculations, he has obtained the position. In London it had been known for a year that Rojo aspired, and it was even said that in reality this was how he distanced himself from some controversies that arose in the management environment of the second largest company in the United Kingdom, a group that he managed with an iron fist, yes, covered by an elegant Victorian silk glove. This surprising 2022 is also the year in which Rojo will retire from the scene to dedicate himself entirely to directing. In San Francisco they hope that, at least one day, he will climb on their boards.

In ballet -and in dance in general- there are no magic crystal balls that predict the future, and many times, the predictions come face to face with the reality of the artists’ careers. Once, seeing Tamara as a diligent student in ballet class, first at the exercise bar, staring at her own outstretched foot with Buddhist concentration, this journalist remarked to a teacher, “That girl stands out.” And the teacher replied: “I don’t know… too short.” With Rocío it was different, but the same; Already when he began, without shyness, but in a different field, he drew attention for his strength and originality. Obtaining the opinion of a great figure of flamenco, Andalusian like her, she sentenced: “We’ll see when that youthful impetus eases, her physique doesn’t help her”. Another crystal ball bug.

Rocío Molina was conscientiously involved in the renewal of her art and the flamenco scene, understanding both as a single aesthetic revulsion, she distanced herself from the scares that Israel Galván gave us, with whose art she was initially related. The female dancer, her most intimate and personal dramas, from pregnancy to menstruation, appeared in her pieces with stark taste and a direct voice, and little by little, searching for a kind of redemptive monologue in solo dance, in a suit plastic for your ideas.

Tamara Rojo joined the staff of the Royal Ballet as a dancer in 2000, and its director at the time, Anthony Dowell, had seen before what he had to see and had invited her to Covent Garden to dance Giselle in an extraordinary way: Red embroidered it. Dowell knew what he was doing, he already had plans, and he was laying the groundwork. Pretty soon little Red gallantly pocketed the balletomaniacs most demanding and numerous in Western Europe. In fact, this rider carved her own path before, when three years ago she had made her debut in Scotland invited by Galina Samsova, who took her to the rainy lands of the north; Samsova had been on the jury of the Paris competition where she had not only been given the first prize, but another special one created for her for her technique. Later, when Derek Deane at ENB has Michael Corder model the new Cinderella was also well aware of the plan: Rojo appeared, his luminous portrait, on the billboard and elsewhere, in addition to two successive covers on The Times.

Many times very different audiences have been seen standing up for Tamara Rojo, and in 1998 it was at the Mayflower Theater in Southampton with the premiere of that Cinderella. And one of the last, at the Moscow Bolshoi at the end of Ashton’s intense Marguerithe and Armand dancing with Serguei Polunin. The wayward and unpredictable Polunin is both a wonderful dancer – when he wants to – and without a doubt his partner last; between them, when they dance, an electricity arises that neither physics nor chemistry can describe; That energy and magnet was also seen when Tamara danced with the Australian Steven MacRae.

Tamara, unhurried, has now begun to delve into the choreography, and could even criticize that the house begins at the top, due to a complicated roof: in this month of January it premieres a new Raymonda with the ENB, still his company until the end of the season. His Raymonda it leaves aside the Crusades, the medieval princes and the invading sultans to set itself in the Crimean War of 1854 and in a character very dear to the English: Florence Nightingale. Formal risks, all. Not many would have dared with a canonical product that lives in Europe mainly on the fame provided by Rudolf Nureyev’s partial version. With the version of Rojo, it is the first time that you will see Raymonda unabridged in the West, a long ballet with music by Glazunov and three acts.

Rocío Molina, for her part, a front-line LGBTI fighter, associate artist of the National Theater of Chaillot in Paris and with a superb analytical intuition to surround herself fundamentally with female collaborators in dramaturgy, music, dance and design, from Rosario La Tremendita to Pepa Gamboa or Pasión Vega, his unstoppable career has crystallized a powerful and vital style. The flamenco dance theater must have it as a reference value.

If in the today forgotten ballets The Amazons (1774) de Anton Schweitzer Ippolita (1789) of Trenta or the others amazon (1823) by Louis Henry and Gallenberg, the mythical fighters came out in large numbers after their boss, the first ballerina, Today’s Amazons also have their fans and deserve our full attention. It is not only dance that is partying, but all art.