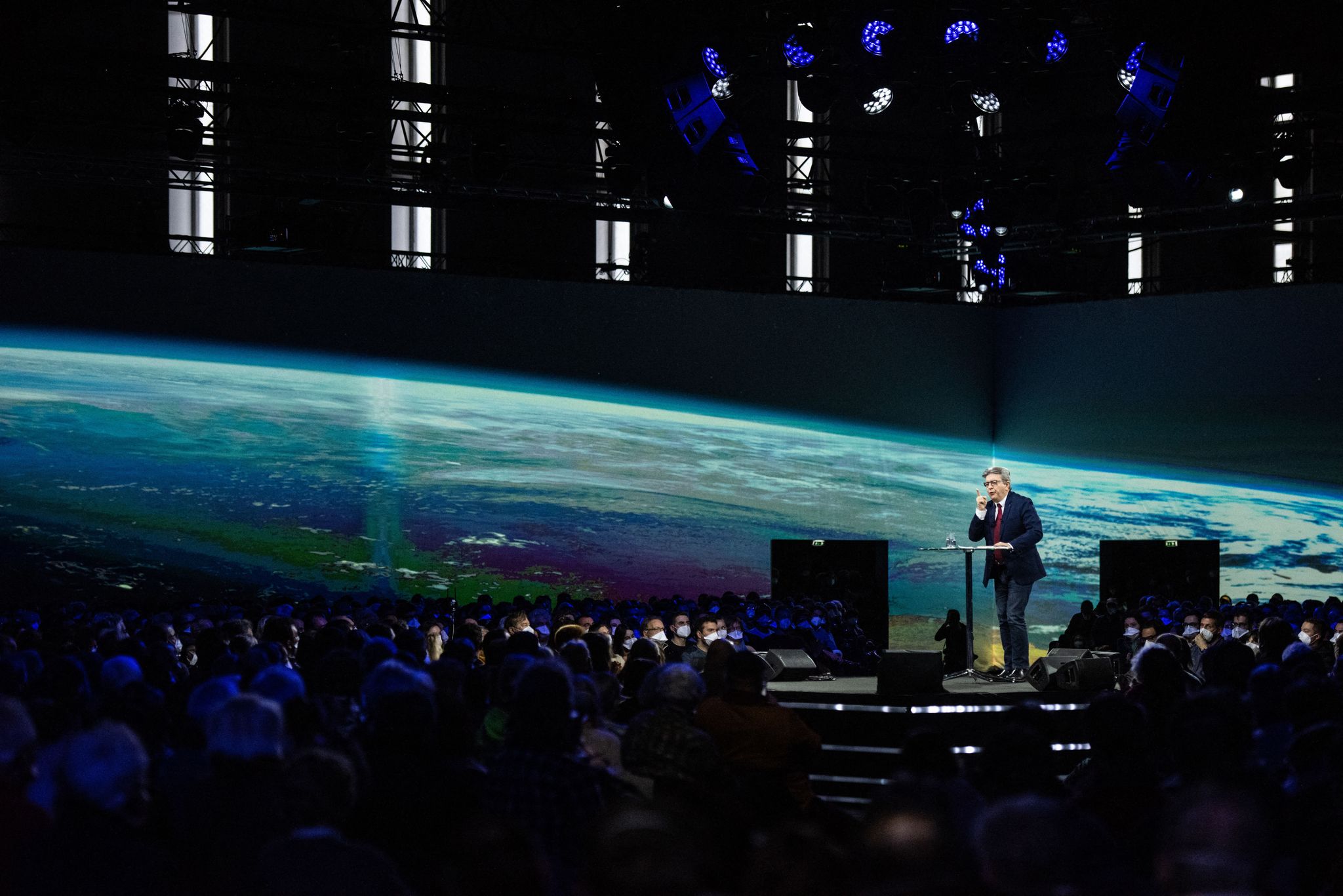 “A world first. To gain momentum in his campaign, the candidate of the Union Populaire Jean-Luc Mélenchon organized his first “immersive and olfactory” meeting in Nantes, Sunday January 16. A room in the exhibition center was completely transformed for the occasion. No less than 75 technicians were mobilized to erect a structure surrounded by 200 meters of canvas screen, offering a 360-degree view, enriched with sound and light effects.

Inside, 3,000 people of all ages, equipped with free FFP2 masks, came to enjoy this sensory experience. It was not easy to recognize the scents diffused (mixture of iodine and flowers) but the cost of the operation is known: nearly €300,000. “We wanted to create a strong moment at the start of the year, explains Manuel Bompard, campaign director. We are not doomed to a gloomy and depressing campaign! »

→ ANALYSIS. The immersive olfactory meeting, the latest avatar of Odorama

The first part of the meeting, opened by Aurélie Trouvou, president of the parliament of the People’s Union and from the anti-globalization movement, was marked by a series of speeches, embellished with videos on the themes dear to the leader of the Insoumis: revaluation of care and bonding professions, feminism, marches for the climate, defense of knowledge and culture… The opportunity, also, to highlight two rallies: that of the communist deputy Sébastien Jumel, then that of Ali Rabeh , mayor of Trappes and close to Benoît Hamon.

Arriving on stage to the cheers of the crowd, in a setting of green towns and villages, Jean-Luc Mélenchon attacked the causes of the health and climate crises. “Nothing that happens is by fate. All are rooted in the social question and in the greed of the capitalist system”, he hammered home, before recalling the main measures of his program: blocking of prices of basic necessities, sharing of wealth “firm and assumed”, minimum wage of €1,400 net, retirement at age 60, student income, upgrading of public services, etc.

If we want to carry out a useful campaign for all these brave people who are in despair, it must be said bluntly: nothing that happens to us is fatal.

Everything is ultimately rooted in the social question.#MelenchonNantespic.twitter.com/eAvv1DD8N1

In a one-hour speech without notes or teleprompter, Jean-Luc Mélenchon immersed the spectators in three different universes. Space first. Standing between the Earth and the Moon, this cantor of “creolity” stressed that “seen from space, racism is more than ever an absurdity”. Calling for an “alter-globalist diplomacy”, he defended the creation of an international climate tribunal, wished for the end of the “commodification of space” and advocated “nuclear disarmament”.

In a second table, devoted to digital, he called for greater sovereignty in this area, for the protection of individual freedom – “undermined by the vaccination pass” – and defended digital accessibility.

→ ANALYSIS.Presidential 2022: Jean-Luc Mélenchon, a last fight with the taste of revenge

Finally, in the third table, the candidate immersed his audience in the middle of the Mediterranean, ensuring that the sea and its energy could, in the long term, replace nuclear power plants. In the same movement, he called for a ban on pesticides and an end to plastic. Recalling his desire to “marry stability of institutions and intervention of the people”, he finally announced his attachment to the citizens’ initiative referendum and to the right of dismissal of elected representatives.

We can’t do without water.

We cannot allow water pollution by pesticides, such as chlordecone or glyphosate.

That is why we will ban these pesticides, right now.#MelenchonNantespic.twitter.com/g70upq3mx9

In reaction to the candidacy of Christiane Taubira, Jean-Luc Mélenchon assures “not to feel concerned by the misadventures of the center left”. Convinced of being the only candidate from this part of the chessboard to be able to reach the second round, he then promises “to welcome all those who want to participate in the implementation of the program”. This political backpacker, for whom this is the third presidential campaign, has allowed himself several strokes of humor. “Trust a sagacious electoral turtle like me,” he says, laughing. There is no point in running, you have to start on time. I have already exhausted a few hares…”

He calls his troops to a march “for the Sixth Republic and the sharing of wealth” in Paris on March 20 and announces the return of a meeting by hologram on April 5 in six cities in France simultaneously.