Metropolitan extreme poverty explodes next to the Besòs

The extreme poverty of Barcelona and its surroundings, especially in the Besòs axis, has come to the fore in recent weeks. Even in the form of deaths due to the living conditions of some realities about which there are not even statistics, but which do not stop growing.

The repertoire of situations of extreme vulnerability begins a month and a half ago in Plaza de Tetuan, in the heart of the Catalan capital’s Eixample, with the death of a couple and their two children in a fire in the old bank office where they lived. It continues before New Year’s Eve, in the municipal building of social flats in the Raval neighbourhood, where an overload in the electrical panel has left residents without power for two months and has revealed the abandonment of the building, where the elderly live, families who have occupied and empty flats or where drugs are sold.

The next episode was last Sunday, when a couple died of intoxication while trying to warm up in a shack next to the Besòs river, in Montcada i Reixac. It had just been opened in a huge settlement that has grown on old orchards. And this Thursday the eviction of one of the Badalona ships where a hundred migrants lived poorly was carried out. Without being able to access the labor market due to an irregular legal situation, some have been from ship to ship for almost 20 years.

Last year, a study by the Institute of Regional and Metropolitan Studies (IERMB) on urban vulnerability precisely located the Besòs strip as the most affected area and with the greatest concentrated and entrenched poverty in the Barcelona area. Next, he cited scattered points on the Llobregat strip and the Raval neighbourhood.

The work, however, does not study the aforementioned realities: occupations of empty premises and warehouses or barrack camps. Because there are no figures, which is also symptomatic. “There are no data, but it is a growing phenomenon in Europe and it has to do with the difficulties of access to housing,” says Sergio Porcel, one of the authors of the study and head of the institute’s social cohesion area.

The city of Barcelona has the capacity to invest in its most vulnerable neighbourhoods, but the reality of warehouses and shantytowns overwhelms the other municipalities on both sides of the Besòs. In 2016, with the encouragement of the mayor Ada Colau, and with the mayors of the area, it was announced that “the time for the Besòs” had come. In 2017, a Besòs Agenda was presented, a roadmap without a calendar or budget. And never knew. 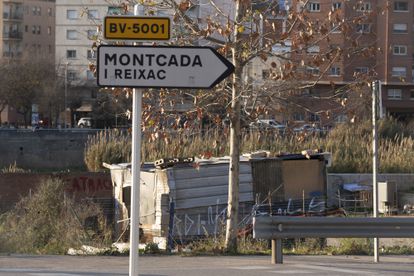 Barraca at the foot of a roundabout, with Montcada buildings in the background.Gianluca Battista

Shantytown is not new along the river, but the settlements are growing in size and number. In Montcada i Reixac there are three large ones (on both sides of the river and in Turó, in front of the cement factory, totaling 400 barracks). Then there are other smaller ones scattered around: La Bòbila, La Torre, la Riera Seca…

The largest, where the couple died on Sunday, extends between the La Roca highway and the river and has numbered streets and shacks, informally divided by the origin of the inhabitants. In addition to dwellings (which are bought and sold and in which an unknown number of minors live), there are informal workshops for recycling scrap metal or pallets. And in the middle, a lagoon of great ecological value with pipes that capture water for the town. There are people who have electricity (flat, generators, windmills) and others who don’t.

From the environmental entity La Màquia they have been making the situation of the enclave public for many years, even organizing visits with politicians, other entities and the press, “to reveal the situation of degradation of the environment and the conditions of the people who occupy it”, explains Sergi A “They are our refugees, we leave them out in the open, in the hands of mafias and between two natural spaces,” laments the activist. Regarding the presence of minors, denied until a few years ago by the City Council, he criticizes that “it allows them to avoid responsibilities, but at the same time it protects them”. The towns next to the river, in addition, are in a flood zone, confirms the Catalan Water Agency (ACA).

There are also settlements outside of Montcada. Between the Ponderosa and Santa Coloma orchards there is another large one, and it is the municipal area of ​​Barcelona. The capital also has even in the center: in the same Plaza de Glòries for months there has been one with twenty barracks in view of everyone, in front of the shopping center, on a fenced lot.

In the port of the Fòrum, another set of tents grows behind the port, already in Sant Adrià, very close to the river. And further up, between La Llagosta and Santa Perpètua, there are two other large caravan settlements that vary in size throughout the year. Almost none of them can be seen in their full dimension from highways.

“They are the invisible ones and they come from the environment, centrifuged, we are the backyard of Barcelona”, explains José Luis Conejero, a veteran of the Can Sant Joan de Montcada neighborhood residents’ association and also of the Baix Besòs Coordinator, made up of entities Tired of nothing moving.

Conejero recounts that, initially, the “favela”, as they call the settlement on the La Roca highway, were orchards of migrants from all over Spain, and with the successive crises they have become homes. “There, the day there is a serious fire, I don’t even want to think about it,” he points out to the town from the viewpoint of Les Cultures.

The hill is a good enclave to appreciate how highways and train tracks cut up Montcada i Reixac in a bad way and create ideal voids to install shacks. The city, with 35,500 inhabitants, is spread out between the high-capacity roads that go to Vallès, the national road, the C-17 that goes up to Vic and Ripoll, and the Girona motorway. There are so many train tracks that the municipality has five stations. And in the middle, in addition to neighborhoods, the cement company LafargeHolcim.

The mayor of Montcada, Laura Campos (En Comú Podem), regrets that “so many times it has been said that it is time for the Besòs, but nobody puts up the money”. “The administrations have invested in the Llobregat side, where there are the country’s economic infrastructures, such as the fair or the airport, and have abandoned the north of the Metropolitan Area.” “There is no doubt that the territory needs help, all the indicators confirm it, and the municipalities alone cannot do it,” he adds. About the towns of Montcada, he assures: “We don’t throw balls away, we don’t shy away from responsibility.” “We have it, these settlements have grown with the collusion of the administrations, but now it exceeds our resources and means,” he laments.

Campos explains that for some time the City Council has been working with the Besòs Consortium: on a study of how much it would cost to tear down and recycle the barracks (three million euros) and commissioning an urban and social diagnosis of a “hermetic and highly fluctuating” space. . The situation, he says, also overwhelms the owners of the land, which are private.

The manager of the Consortium, Carme Ribas, points out that in order to put an end to the settlements “it is necessary to provide a residential solution for its inhabitants and define and speed up new land uses to avoid new implantations”. And he adds that it is also necessary “the involvement of supra-municipal administrations, both for the investment it requires, and for the difficulty of managing it, due to the lack of public housing”. The ultimate goal is for these lands to be integrated into the river park, which now ends in Santa Coloma de Gramenet. 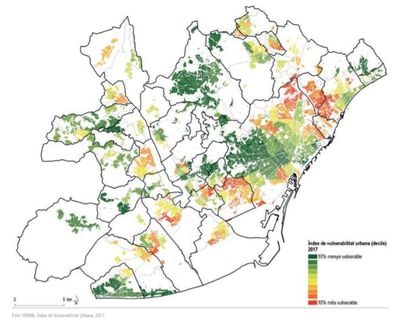 Urban Vulnerability Index in Barcelona and its area prepared by the IERMB. Indicates from green (less) to red (more) the intensity of vulnerability in areas where there is a population that suffers it.

A concentrated and self-perpetuating vulnerability

The study on urban vulnerability in Barcelona and its metropolitan area carried out by the Institute of Regional and Metropolitan Studies (IERMB) is devastating in showing how this situation is so intensely concentrated in the Besòs area and how it is perpetuated over time . Barcelona, ​​Sant Adrià, Badalona, ​​Santa Coloma, Montcada and Ripollet concentrate 74% of highly vulnerable areas. And analyzing data since 1991 shows how the situation is perpetuated over time.

The director of the Urban Cohesion area of ​​the IERMB, Sergio Porcel, points out that the improvement in situations of vulnerability “only occurs when there are new housing developments and changes in social composition”. In favor of “structural and not conjunctural policies”, he says that “it is very difficult to remove these neighborhoods from the lower zone of the hierarchical structure of vulnerability, a broad strategy with guarantees of income and social housing would be necessary”.