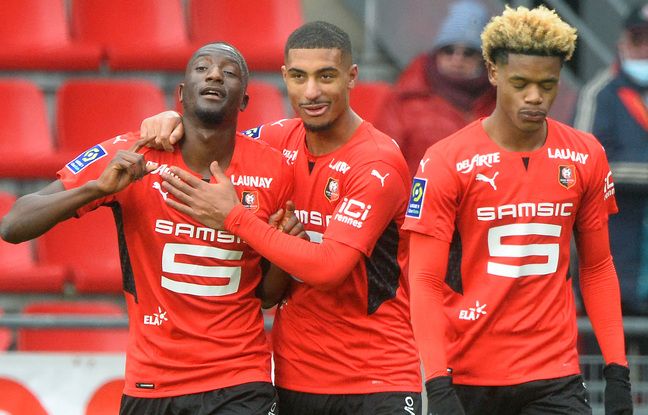 We do not know if the Rennes players wanted to pay tribute to Novak Djokovic, expelled from Australia. Still, it was on a tennis score that Bruno Genesio’s men crushed ghostly Bordelais this Sunday afternoon at Roazhon Park (6-0). This is not the first time that the Rennes attack has been unleashed this season. Before the Girondins, Clermont (6-0), Saint-Etienne (5-0) and Lyon (4-1) had already taken the broth against Rennes, the second best attack in the championship (40 goals) behind Paris.

The attacking duo of Stade Rennais in Ligue 1 this season:

“We want to offer play, to have fun and give it and to have an attacking game”, underlined coach Bruno Genesio at the end of the meeting. It was Martin Terrier who launched the festivities at half an hour by shooting poor Costil at point-blank range. Benjamin Bourigeaud then reminded everyone that he was an excellent free-kick taker by breaking just before half-time.

Guirassy finds his way back to the nets

The attacking festival continued on the return from the locker room with goals from Laborde and Truffert before Guirassy, ​​in dire need of success lately, went there with his double at the very end of the game. “It was a good opportunity to bring him in, it will do him good,” said Bruno Genesio, closing the door to a departure from his striker this winter.

🔴⚫️ Silent in Ligue 1 since the 2nd day in Brest, Serhou Guirassy returns to the opposing nets against Bordeaux (89 ‘, 5-0) this Sunday in Ligue 1. His 18th goal in Red and Black. #SRFCFCGB https://t.co/AmopKkmziq

With ten goals already on the clock this season, the best total of his career, Martin Terrier is also enjoying this great success. “We were keen to get back on track,” he said. And when you manage to score so many goals, it gives everyone confidence.” His partner Benjamin Bourigeaud, also a scorer, appreciated the face displayed by his team. “We had lost the sense of sacrifice a little lately, he assured. We had to find our fundamentals, namely to play for each other, and we did it in a good way today”.

With this victory, Stade Rennais, which had three losses in a row against direct competitors for Europe, took the opportunity to move up to the top of the rankings (4th). “This allows us to stay within gunshot distance of Nice and to get past Lens,” indicated Bruno Genesio, however refusing to get fired up after this big victory.

“There were plenty of positive things today but we will now have to confirm,” said the Rennes coach, even allowing himself to be choosy. “We should have led to the score more quickly and there was waste at the end of the match, he underlined. The big teams leave nothing to the opponent, it’s our margin of progress”.