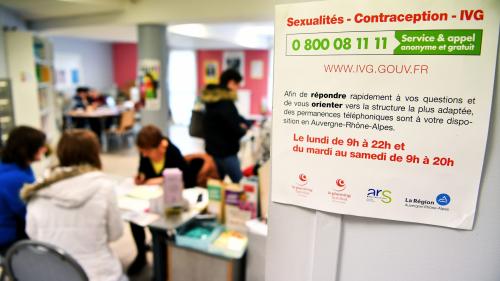 These are sites with a reassuring name, with iconography close to institutional pages, sometimes with a toll-free number… While an anti-abortion demonstration is planned for Sunday January 16 in Paris, four days before the exam in second reading in the Senate of a bill aimed at extending the legal period for voluntary termination of pregnancy (abortion) from 12 to 14 weeks, franceinfo looked at certain sites that campaign against abortion. They try to influence future mothers about what to do with their pregnancy, in particular through misinformation.

Thus, on the homepage of the ivg.net site, a toll-free number guarantees a listening ear every day, articles promise explanations of abortion procedures and we see the photo of Simone Veil, the origin of the law decriminalizing abortion. At first glance (“All the info on abortion you need”), the site looks almost informative and institutional.

On the other hand, if you go down to the bottom of the page, the site sends you to a Facebook page entitled “Abortion: you hesitate? Come and talk about it”. It has 110,000 members and has even offered, since December 2020, a closed group to “discuss and share directly, without it being public”. What we discover on this page is no longer neutral. For example, there is a video clip, in which a woman dances on the beach and talks to her unborn baby. “Forgive me for not having been able to keep you,” she said. You can also listen to the testimony of a certain Inès, 26: “A mother is supposed to protect her child and I killed him,” she said after her abortion. “I would have really liked to know him, to take him in my arms. I can’t forgive myself for that.” The comments on this page also all go in the same direction: in essence, “if you do it (if you have an abortion), you will regret it.”

Guilt is also on the toll-free number program. When we contact him to say that we are pregnant and that we are afraid of regretting an abortion all our life, here is what a listener replies: “The only thing I can say is that we don’t We never hear back from women who have regretted having a child.” As for the potential “risks” mentioned, sterility is “not very common” according to the listener but “complications to conceive or carry a pregnancy to term are quite common”.

Another site, SOS Mamans, offers financial and material support to pregnant women who are thinking of having an abortion. For this, it offers emergency housing or assistance of up to 500 euros per month, for example. One of its members assures us that out of 1,700 women met, only two had an abortion.

However, obstructing abortion has been an offense since 2017. However, this does not seem to worry these sites because they adapt their discourse, so as not to fall under the law. “They don’t use a violent vocabulary. We don’t say ‘Madame, you mustn’t have an abortion’, but rather ‘Think well all the same’. It’s less radical”, explains Sarah Durocher, national co-president of Planning family.

She deplores the vagueness practiced by these collectives. “They use the same vocabulary as us: sex education, contraception. There is really something different and dangerous.” Family Planning also regrets that very few women are informed of the existence of this offense of obstruction, which is punishable by two years’ imprisonment and a fine of 30,000 euros.

Anti-abortions very present on the internet: report by Farida Nouar