Design nanosatellites and promote the local product. This is how the region of Oviedo looks to the future

After years of struggling to reinvent itself, the economy of the Oviedo region is now looking hopefully towards a future marked by a more innovative industry and a stronger and more digitized primary sector. The news that has accompanied the entry of 2022 is a reflection of how the next few years may be. The Government of the Principality has announced that it plans to launch Asturian nanosatellites to promote 5G in the area, transform the Soto de Ribera thermal power plant to generate hydrogen and promote the construction and expansion of industrial estates due to the demand of a new sector that is gaining strength in the region: logistics. The latter, given the arrival of large multinationals in towns such as Llanera (13,790 inhabitants) and Siero (51,608 inhabitants) has caused other smaller companies to want to establish themselves by their side and the demand for industrial land has grown in the last year by a 40%, according to municipal data. “We have the obligation to place Asturias at the forefront of science, research and innovation,” said the president of the Principality of Asturias, the socialist Adrián Barbón, during a visit to the Asturias Technology Park last summer.

Added to the plans carried out by the Administration and the investments of large companies are projects such as those of the Post Office, focused on two aspects: being a link and a logistical support point for large companies in the area (through its parcel service or Digital Solutions) and promote the rural development of the region. Its initiatives include, on the one hand, bringing postal, financial and administrative services to the door of neighbors through its rural postmen and, on the other, supporting small producers and entrepreneurs to digitize their sales, position their business in the web and distribute their merchandise. “There are companies [logísticas] that you are not going to a remote town to pick up a package from a gentleman that is going to send a kilo of pears. Post office does. It has that intrinsic vocation of 300 years ago of providing a service to the citizen”, says Domiciano Pache, commercial parcel manager for Correos in Asturias and León.

Logistics enclave with an aerospace future

Strengthening the aerospace industry for telecommunications is one of the main paths that the Government of the Principality wants to take in the coming months. To this end, the Ministry of Science and Innovation has launched an innovative public procurement tender to create test benches for nanosatellites to develop 5G technology and test benches for rocket motors, qualified by the European Space Agency. These small ships (up to only 10 kilos in weight) will operate at about 8 kilometers per second in low orbits (between 400 kilometers and 650 kilometers in altitude). The estimated price of each of these nanosatellites is between 50,000 and 100,000 euros. Borja Sánchez, the Minister of Science, Innovation and University, stated last November that the project will allow new opportunities to be achieved, from promoting 5G technology, cybersecurity, creating emergency networks in high mountains or sea and carrying out geographical mapping of the region. The region does not start from scratch in this sector, in Oviedo is located the Institute of Space Sciences and Technologies of Asturias (ICTEA), of the University of Oviedo. This year, in fact, the Ministry of Science, Innovation and University has allocated 8.7 million euros to 56 research groups, most attached to this university, to develop emerging technologies, artificial intelligence studies and clean energy.

These public initiatives are joined by others led by entrepreneurs, such as H2Vector, from Oviedo, dedicated to energy management systems based on the production of green hydrogen. One of its projects, a personalized recharging station for logistics centers and SMEs, has been selected by the European Clean Hydrogen Alliance organization as “viable investments and innovative solutions that cover all phases of the clean hydrogen value chain”. 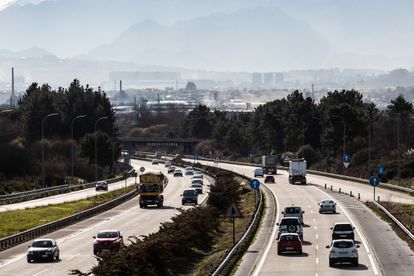 Several cars circulate on the A-66 motorway as it passes through Robledo in the direction of Oviedo. Julian Rus

The logistics sector has strongly joined this incipient aerospace activity. In part, due to the location of many of the towns in the region. The A-8, the A-63, the A-64, the A-66, the N-630, the N-634 and the ASII industrial highway run through it. In addition, the port of Gijón is 24 kilometers from Oviedo, the capital, which is also 127 kilometers from León and 200 kilometers from Santander. “Gijón can be a gateway [de mercancías] important and communications by land with the rest of Spain are good. From here, we reach all the places”, says Pache.

Infrastructures that have turned Siero and Llanera into two perfect enclaves as points of storage and distribution of goods in the north of the peninsula. So much so that the council of the latter municipality is working to release industrial land adjacent to its Silvota estate in the face of growing business demand. “Some entities have already asked to use 60,000 or even 120,000 square meters. Llanera is in the center of Asturias and within the Oviedo, Gijón and Avilés triangle”, the mayor acknowledged last year to the local media.

After 30 years working at Correos, Pache affirms that the revolution of recent years in parcel shipments has been spectacular: “The e-commerce. Everyone buys, everyone sells. Is incredible”. But it is not always easy to digitize a small business to be able to sell outside the region, especially if it is located in remote towns. Reason why the logistics operator created Correos Market, a platform for selling products to customers throughout Spain that also offers the biography of each producer and their contact. “Those small businesses that had no outlet in the market, we are helping them to enter. Many of these companies in the future may come to prominence”, emphasizes Pache.

Even with the availability of this structure to sell online, maintaining a business in a town with few inhabitants is still a difficult task. Depopulation has meant that basic services, such as financial services, essential for the day-to-day life of a small business project, are disappearing. To alleviate this, since last year the postmen from all over the region have brought to the homes of the neighbors the services that, due to this exodus, are disappearing from the rural areas: payment of bank receipts, sale of envelopes, stamps, packaging for packages, delivery of the DGT badge, concert tickets, train tickets, and even delivery of cash from customers’ savings accounts. An initiative that, for many entrepreneurs, makes their daily life easier and they choose to stay in their town. Also, it has launched the installation of 27 ATMs throughout Asturias, some of them in towns with between 500 and 3,000 inhabitants that do not have a bank branch or will be without one soon.

Union of farmers to alleviate unemployment

The third line of action of the Government of the Principality, together with aerospace activity and logistics, is to give more support to the agri-food sector which, according to official data, ranks second in regional industrial production and contributes some 1,700 million euros each year to the regional Gross Domestic Product. The objective: for the primary sector to grow from 20 to 25% and allow the creation of 10,000 jobs, direct and indirect, until 2030. For this, the Autonomous Government has budgeted 96.3 million euros in aid for ranchers and farmers. Just over 19 million euros of that item will go to the modernization of farms and the incorporation of young people into the activity.

In some towns, such as Ribera de Arriba, where unemployment exceeds 22%, this type of initiative could mean the necessary push for the economy to improve. For three years, the Municipal Council and the Autonomous Government have been designing a pilot project to create an agricultural estate in Bueño (belonging to the council of Ribera de Arriba) where agricultural companies that employ young people can settle. The first step is to put an end to the smallholding of 55 hectares of land next to the Nalón River to generate several larger parcels where more profitable production can be established. The plain of Bueño is known for its potential to plant kiwis and blueberries.