Champions Cup: UBB and Clermont revive, Montpellier humiliated at Leinster… What to remember from the matches of the 3rd day on Sunday

After the misstep of Toulouse in England and the victories of La Rochelle and Racing on Saturday, it was the turn of Montpellier, Union Bordeaux-Bègles and Clermont, Sunday January 16, to tear themselves apart to preserve their chances of qualifying for the knockout stages of the Champions Cup. Back to the results of the games of the third and penultimate day of the group stages.

UBB and Clermont give themselves the right to dream

They were up against the wall. After a near no-match at the opening against Leicester (16-13 home defeat) and a draw decreed by the EPCR, the UBB had to win at home against the Scarlets to keep a chance of scratching a place. in the round of 16 of the European Cup. By dominating the Welsh (45-10), offensive bonus in the key, the UBB has completely relaunched itself in the race for qualification. Well into their match, the Bordelo-Béglais initially lacked control to concretize their domination against opponents who started their European campaign at Chaban-Delmas after a withdrawal and cancellation.

Despite a colossal 80% occupancy figure after 20 minutes, the score was 0-0. Then, the international opener, Matthieu Jalibert took the match on his own and unblocked the situation. A decisive support and three assists to his credit – just that – allow his selection friend Cameron Woki to plant the first try of the match (21st, 7-0). Number 10, who was to start on the bench, is also involved in the trials of Louis Bielle-Biarrey (18, first tenure, author of a hat-trick) and Geoffrey Cros (27th, 30th, 20-0). 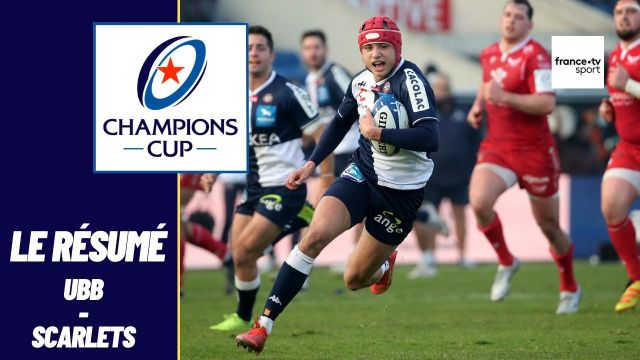 The UBB was then able to unfold by scoring seven tries in total under the baton of a surprising Santiago Cordero, winger replaced in scrum half for the occasion. Reassuring and once again in the race for qualification, the players of Christophe Urios will nevertheless have a fierce fight to fight against the backdrop of the Leicester Tigers to win their ticket for the final table. The only downside to this Sunday match was Matthieu Jalibert’s injury in the 47th minute.

We had to wait until the last moments of this meeting between Clermont and Sale to determine the winner of this suffocating mano a mano. Established in the center for the fifth time this season, the tricolor winger Damian Penaud, very inspired (a try in the 40th minute), took ASM in his wake to clinch a precious victory (25-19) against the English . Thanks to this success, the Clermontois can still get a place in the round of 16 next Saturday on the lawn of Ulster.

After a festival of six tries in the first period and a multitude of gifts offered by ASM to its opponents of the day, the debates became tense. A slew of forwards annihilated the slightest offensive initiative while the balls returned to the opponent multiplied (15 on the Clermont side, 19 on the Sharks side). The left paw of Morgan Parra, entered on the hour mark, did not shake to offer six additional points and allow Clermont to end a series of four consecutive defeats at home in the Champions Cup.

Historic defeat of Montpellier against Leinster

The defeat on green carpet conceded against Montpellier in the first leg by decision of the EPCR had stuck in their throats. The Leinster Irish were quick to put things in their place. The quadruple European champion, and contender for the final title, unsurprisingly crushed a deeply reworked Hérault team by winning (89-7, 13 tries to 1). Montpellier, winner of the Challenge Cup last season, conceded the heaviest defeat in its history in the European Cup.

Five weeks since Leinster, hard hit by the coronavirus, had not played, it is an understatement to say that the Irish had ants in their legs. Clean in conquest, dominating in impacts, the Rugby Championship dolphin stifled his opponent (77% occupancy, 60% possession and two tries in ten minutes). Thanks to a high-class passing game after contact, it took him less than half an hour to take on the offensive bonus and take cover for good (24th, 28-0).

If the Irish have taken a big step towards qualifying for the round of 16, Philippe Saint-André’s players are not mathematically eliminated. It will nevertheless be necessary to achieve a feat when receiving Exeter, who had spanked them in the first leg (42-6).