The story of a young college student via Reddit echoes among Internet users after he expressed his discomfort at the amount he received as a tip in the restaurant where he works to maintain his studies, because after a consumption that exceeded ten thousand pesos, diners they limited themselves to leaving one hundred pesos.

In his testimony he details that the table he attended was not exactly courteous or conscientious, because in addition to calling the restaurant staff with “whistles” on some occasions, he demanded some modifications to the preparations of the dishes they ordered. Even when it comes to drinks, customers they ordered bottles that weren’t even part of the menu.

“This weekend a family came for dinner, the kind that ask you for the bottles that aren’t on the menu and you have to be there all the time. Total, after more than 4 hours they ask for the bill, of which there were more than 10 thousand varos. They divided it up and paid with a card”, shares the user who calls himself YoshiBrightside on Reddit and who titles “The whole stingy race has me up to my knees”.

“The account was closed and they told me that the tip would be in cash,” he continues, but his surprise was enormous when he saw the amount they had provided for his service: “When I see, they had left ONE HUNDRED fucking pesos. For all the service”, he laments.

“Quickly (and quite annoyed) I told him that the minimum recommended amount is 10%, to which he replies: “excuse me, but a tip of 1,000 pesos is too much, I’m leaving just enough for myself,” continues the waiter who also expresses that the service and attention he had given them was always excellent.

“We provided excellent service, we made sure to change all the details that they wanted in their dishes and we even put up with him whining to talk to us,” he recalls, in addition to regretting that because of this ended up with a debt with the kitchen staffWell, six percent of the tip goes to them and the rest to the staff on the floor. 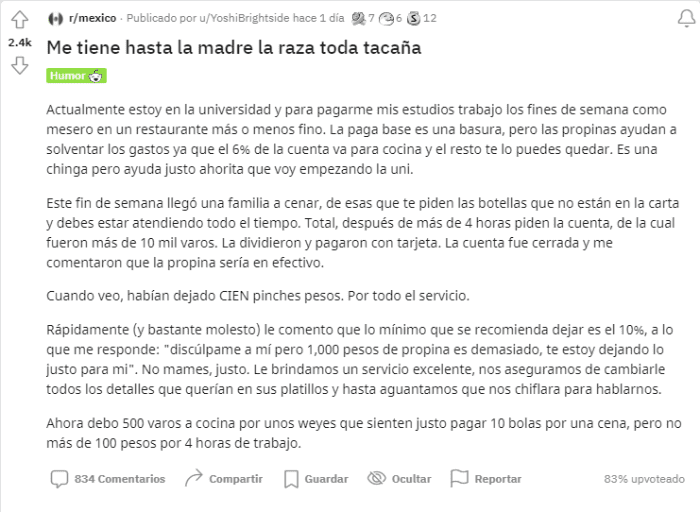 “Now I owe 500 varos to the kitchen for some guys who feel it is fair to pay 10 balls for a dinner, but no more than 100 pesos for 4 hours of work”, concludes the young man.