PUBG developer is suing Apple and Google, among others, for copyright infringement

PUBG developer Krafton has sued mobile developer Garena, along with Apple and Google, for copying two mobile games from the developer.

In the company complaint (seen by The Verge), Krafton accuses Apple and Google of distributing a “clearly infringing mobile version of Battlegrounds” developed by Garena on their app stores.

Krafton is suing Garena (and the other companies involved) for a “deliberate copyright infringement” surrounding two titles, Free Fire and Free Fire Max.

Garena describes Free Fire as “the ultimate survival shooter game for mobile”, pitting 50 against each other, or in squads of 4, in 10-minute rounds on an island. In it, players parachute down, stay in a safe zone and aim to become the last remaining player.

Krafton states that both Free Fire and Free Fire Max “copy multiple aspects of Battlegrounds”, including the “unique and copyrighted ‘air drop’ feature” as well as a “combination of weapons, armor, and unique objects, locations, and overall choice of color patterns, materials and textures” in the game.

Free Fire and Free Fire Max are free on Google Play and the Apple App store, but have in-app purchase options. Krafton claims that Garena made “hundreds of millions of dollars” from sales in both titles and that Apple and Google “made a lot of money from that as well.”.” 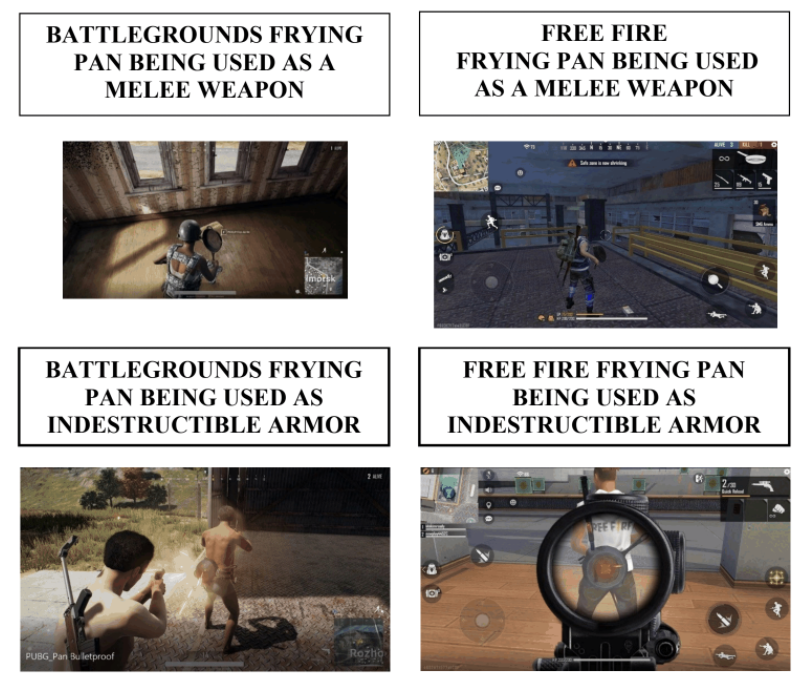 Comparisons from Krafton’s indictment. (Credit: Krafton, from shared documents from The Verge)

Krafton says he has previously been in contact with Garena about the games in question. “On or about December 21, 2021, Krafton then asked if Garena would immediately stop exploiting Free Fire and Free Fire Max,” the indictment, which also says Gardena refused.

The company says it has done the same with Apple and Google for distributing the games on their platforms. The lawsuit alleges that Apple and Google have flouted their legitimate copyright claims. As a result, Krafton believes that both companies should be held liable for “deliberate copyright infringement.”

The indictment also cites YouTube, which is owned by Google, and says it asked to remove “multiple posts” featuring Free Fire and Free Fire Max gameplay. Mention is also made of the live-action film called ‘Biubiubiu‘, which Krafton calls “nothing short of a live-action dramatization of Battlegrounds”.

This is not the first PUBG lawsuit, last week PUBG Mobile hackers were ordered to repay $10 million in the U.S. The developer said after that win to invest the money in anti-cheat technology for the game.

Here’s why the developer says making the game free-to-play on consoles and PC isn’t a reaction to the success of free-to-play shooters like Fortnite and Apex Legends.