Lined with plane trees and trees which, on fine days, make residents enjoy their white and pink flowers, El Bosque Avenue is a wide, pleasant thoroughfare in Santiago. The city center and the presidential palace of La Moneda are only a few metro stops away, but the name of the avenue and the streets it intersects – rue des Dahlias, rue des Hortensias – recalls the bucolic character places, land of choice for Chilean high society in the second half of the 20th century.

With its imposing cross and tall red bell tower pointing into Santiago’s blue sky, a grand church stands out from afar. It’s a neighborhood landmark. The Church of the Sacred Heart of Jesus is also known to everyone as El Bosque Church. Inside, the number of benches has been limited, due to the pandemic, but residents and families go to mass as usual, taking care to respect health rules.

This peaceful parish seems to be a parish like all the others in the Chilean capital. Larger, certainly – it occupies the equivalent of a city block –, undoubtedly more prosperous, cardinal point of Providencia, which was one of the most chic neighborhoods of Santiago until the 1990s, when the houses were gave way to elegant buildings to accommodate the new middle classes. But these appearances are deceptive. “When I give my sermon on Fridays and talk about repentance, expiation, everyone knows what and who I am referring to,” explains Father Carlos Eugenio Irarrazaval, parish priest.

An absentee too present: Fernando Karadima

This far too present absentee is his predecessor, Fernando Karadima, convicted of sexual assault on minors with violence and abuse of his ecclesiastical authority in 2011, before being definitively dismissed from the clerical state in 2018 by the pope. Francois. He died in July 2021, without ever having been tried by Chilean justice: the facts attributed to him, dating back to the 1980s and 1990s, were time-barred.

Fernando Karadima was dismissed from the clerical state at the end of 2018, seven years after being convicted of sexual assaults on minors. / Sebastian Silva/EPA

Father Carlos Eugenio Irarrazaval had the heavy responsibility of succeeding him in 2011. “When I arrived, I found a parish strongly divided between the victims, on the one hand, and those, on the other, who didn’t want to believe them, he recalls. It was a terrible situation, because Fernando Karadima’s grip was very strong. He exercised a form of control over many worshippers. The priest recalls the weight that his predecessor could have even in the private life of young adults, advising them, for example, not to frequent such and such a woman. “When I arrived, I put God back at the center of the parish,” explains Father Irarrazaval. Not me, not the priest. God. »

During these years, the parish priest also endeavored to protect the parish, the better to help it turn the page. The Church of the Sacred Heart of Jesus had become, on its own, the symbol of the crisis affecting the Chilean Church, an institution that had been highly respected until then because of its role alongside the families of the disappeared during the dictatorship. “If there has been so much attention to this parish, media attention in particular, but also political, it is also because it represented three things: well-to-do neighborhoods, a traditional faith, and the right, loose- he. Some even felt that the church should be destroyed, to make a memorial or even social housing. They wanted to punish us. »

The priest affirms that the Chilean media were less interested in figures of the Church close to the left and also implicated. Like Enrique Moreno Laval, a time prisoner at the national stadium after the coup against Salvador Allende in 1973, committed alongside the victims of the dictatorship, and suspected of child abuse before dying in 2018. Or Cristian Precht Bañados , one of the founders, in 1976, of the Vicariate of Solidarity, a body created by the Chilean Catholic Church to assist the victims of Augusto Pinochet’s regime.

Ardent in defending his parish, the priest of the Sacré-Coeur-de-Jésus did not always escape controversy. For some, he seems inclined to want to turn the page a little quickly. In 2019, he was appointed auxiliary bishop of the diocese of Santiago, but the Vatican was quick to back down. Asked soon after about sexual abuse, he called this crisis a “reheated dish”, arguing that the Church must now look to the future.

A statement that had provoked the ire of public opinion, in a country hit hard by a crisis of such magnitude that it had pushed all the Chilean bishops to resign in May 2018. The reaction n It didn’t take long: just twenty-four days after his appointment by the pope to the post of auxiliary of the diocese of Santiago in Chile, Bishop Carlos Eugenio Irarrazaval had been forced to resign.

More than a decade after the revelations concerning Fernando Karadima, the Chilean Church, as an institution, has lost much of its authority. This development is taking place even though the country is engaged in a deep reflection on its future: for several months, an assembly elected last year has been working on the drafting of a new Constitution, which will be submitted to the population on the occasion a referendum this year. In these debates, where all the subjects that agitate South American societies are discussed (abortion, inequalities, access to water, role of women, place of minorities, etc.), the Catholic Church is absent from Brand. 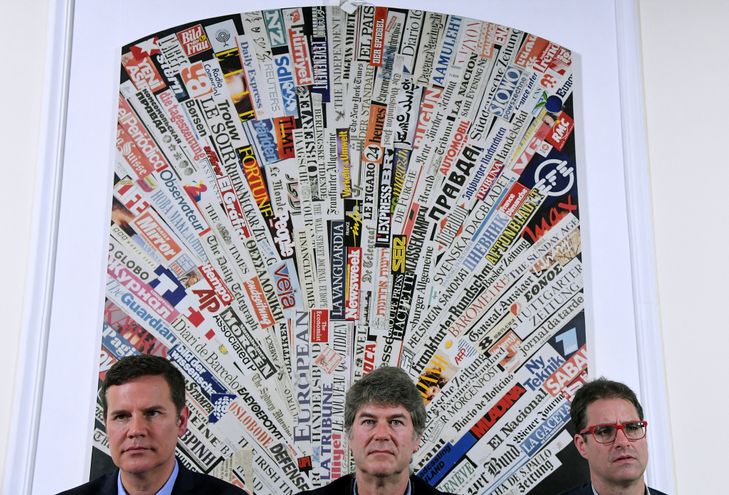 The three victims of Fernando Karadima who brought the case to justice: Juan Carlos Cruz, James Hamilton and Jose Andres Murillo (from left to right), in 2018. / Tiziana Fabi/AFP

For José Andrés Murillo, one of the three victims of Fernando Karadima who brought the case to justice, the Chilean Catholic Church is paying the price not only for the abuses, but also for the way it reacted to these cases. Director of a foundation he created in 2010, Para la confianza, to fight against pedocrime and violence against children, he closely follows these issues on a global scale, and even more so in France, where he has studied. And measure the differences.

→ REPORT. The badly extinguished embers of the Chilean dictatorship

“The response of the episcopal conference in Chile was diametrically opposed to that of the bishops of France, where the Church ended up recognizing and assuming institutional responsibility for sexual abuse,” he laments. Just a few weeks ago, the Chilean Episcopal Conference published a document in which it insists on individual, not institutional, responsibility and denies any idea of ​​reparation. »

Reconciliation with society is the great challenge of the Chilean Church. An even more imperative task with the new generations: a survey conducted in December by the Diego-Portales University indicated that the Catholic Church was the institution which aroused the most rejection (67%) among 18-29 year olds.

Pope Francis facing the crisis of the Church in Chile

January 2018. Latent for several years, the crisis of the Church in Chile burst into the open on the occasion of the trip of Pope Francis to this country. The pope then took up the defense of the bishop of Osorno, Mgr Juan Barros, accused of having passed over in silence the abuse of minors which he would have witnessed on the part of a priest, Fernando Karadima, actually condemned in 2011 in a canonical process. The pope finally decides to entrust an investigation to Mgr Charles Scicluna, archbishop of Malta.

May 2018. Convocation to Rome of all the Chilean bishops after the report of the investigation by Bishop Scicluna. All submitted their resignations to Francis, who immediately accepted seven, including that of Bishop Juan Barros.

September 27, 2018. Fernando Karadima is dismissed from the clerical state by Pope Francis.

February 5, 2020. Appointment of a new bishop for the diocese of Osorno, Msgr. Enrique Concha Cayuqueo. Since the en bloc renunciation of the Chilean bishops in 2018, Pope Francis has renewed around 20% of the country’s episcopate.

24 mars 2021. Juan Carlos Cruz, victim of Fernando Karadima and whistleblower, is appointed to the Pontifical Commission for the Protection of Minors.

The new Noordervliet serves clichés without an ulterior motive