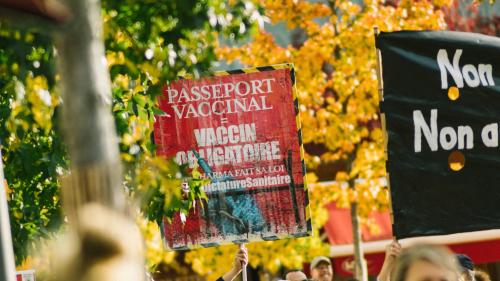 “You are going to die. Stabbing, decapitation, rocket launcher, gun, bomb, no matter how we kill you, you will quickly understand that our freedom should not be touched.” Some 52 elected officials, including the LREM deputy for Haute-Saône Barbara Bessot-Ballot, who testified on France 3 Burgundy-Franche-Comté, found this death threat in their mailbox at the end of December 2021. For the LREM deputy for the Channel Bertrand Sorre, who also received this message, there is no doubt: “It is about threats linked to the health measures taken recently”, assures the parliamentarian to franceinfo.

“I have an arsenal of war at home and you will be directly targeted, no matter where you are…” “One day you will no longer be a deputy, no more protection, that’s where we will strike, you or your family, your children, at a time when you don’t expect it…” “I’ll go and put your ball on you after demolishing your knees so that you know what evil is…” threatening messages, received by deputies and transmitted to the police, which franceinfo was able to consult, are chilling.

The violence of words, but also of actions. The LREM deputy for Saint-Pierre-et-Miquelon Stéphane Claireaux, was assaulted at home, on January 9, during a demonstration against the health pass. “I was waiting for the demonstrators in order to be able to discuss with them, said the elected official. There was a car which was loaded with seaweed, seaweed, and people started throwing it at me. It looked like to a stoning.” This aggression shook the political class. Traveling to Nice, Emmanuel Macron regretted Monday “the intensification of violence” against elected officials. In an increasingly tense political context, in particular by the ongoing debates in Parliament on the transformation of the health pass into a vaccination pass, the threat is taken very seriously by the authorities.

“There have always been elected officials threatened, but not in such proportions”, notes franceinfo Sonia Fibleuil, spokesperson for the national police. This type of action is at the initiative of “radical activists” of the anti-pass movement, she explains. In the first eleven months of 2021, violence against elected officials increased by 47%, according to data from the Ministry of the Interior. In total, 162 parliamentarians and 605 mayors or deputies were victims of willful attacks on physical integrity, confirms Place Beauvau to franceinfo. More than 300 complaints have been filed by elected officials over the past six months, and, over the same period, around fifteen arrests have taken place, announced Gérald Darmanin on RTL, Tuesday. Figures also confirmed to franceinfo by the Ministry of the Interior. According to national police data, more than half of these threats are made on the internet.

“An increase in the number of threats appeared as early as July 2021, which corresponds to the period of implementation of the health pass. This was relaunched in December with the sending of death threats against deputies.”

As of July 2021, the Paris public prosecutor’s office opened a vast investigation into these threats against personalities vested with a public mandate, following a report by the President of the National Assembly, Richard Ferrand, in application of section 40. The Code of Criminal Procedure requires any authority having knowledge of a crime or misdemeanor to report it to the courts. At the beginning of January, almost six months after its opening, the investigation concerns 250 facts against 150 people targeted, mainly deputies, confirms the Paris prosecutor’s office to franceinfo.

The Paris prosecutor’s office does not, however, handle all cases. In Le Havre (Seine-Maritime), the criminal court sentenced a man to four months in prison on January 5 for having called on the internet to kill deputies. “I want to kill a deputy. I want to see blood….”: behind these explicit threats, a 19 year old student frequenting dark web forums. The message had been posted the day before the debate on the vaccine pass. During his trial, the young man denied any politicization, relates the deputy prosecutor of Le Havre to franceinfo.

“It is necessary to crack down, given the multiplication of these cases.””

Some calls for violent action are also spotted on forums by the intelligence services. The investigators of the judicial police then rely on the errors made by Internet users hidden behind pseudonyms and on the cooperation of the American digital giants to obtain information making it possible to identify the suspects, specifies the national police at franceinfo. The identification of the student tried in Le Havre was able to be carried out after a report on the Pharos platform, despite the presence of a VPN (a virtual private network).

It remains difficult to draw a composite portrait of these “radicalized” anti-passes at the origin of threats. “This is a broad movement that manages to aggregate, around anger, very different profiles, points out Sonia Fibleuil. “They come from both pro-Raoult, the far right conspiracy, yellow vests’ and the extreme left”, specifies a police source to franceinfo.

“We are increasingly faced with hybrid profiles due to the strong polarization of society.”

According to researcher Philippe Breton, doctor in information and communication sciences and professor emeritus at the University of Strasbourg, “the anti-vaccination movement itself is a very heterogeneous movement”. But the anti-pass and the anti-vaccination share a posture of “secession”, which generates “violent radicalism”. “The barriers that protect us from civil violence are rising little by little”, with this very radical fringe “convinced that we want to keep it out of society”.

“When you break away from society, there is a process of dehumanizing the other.”

On the side of the targets of the threats of the anti-pass, we find a rejection “of the one who knows”. “Their target is the category of the elite, depending on the news, we attack first the doctors, then the deputies. For them, it’s the same figure”, adds the researcher . François Crémieux, new director of the AP-HM in Marseille, was targeted with threatening tags at the home of a namesake in early September 2021. He filed a complaint for “public insults towards a public service official” and “threat of crime or offense against persons or property against a public service official”. The director of the institution, who tries daily to raise awareness on the subject of vaccination, tells franceinfo take these threats seriously. “I think these are serious facts, just like when they happen to caregivers or parliamentarians.”

Deputy Bertrand Sorre meanwhile filed a complaint against X at the end of December 2021 for “death threat”. The chosen one is confronted with the difficulty of identifying the authors of threats, which is often the case when the latter intervene online. The parliamentarian sees in the phenomenon an endangerment of democracy. “They seek to install a little music of fear to change the votes, to set up a tension, denounces the elected official. With these threats, these anti-passes try to instill the idea that we are going to be attacked if we vote for this or that health measure.

Since the end of November, a referent from the National Assembly has been responsible for supporting elected officials in their procedures and the filing of systematic complaints is encouraged. “Faced with the multiplication of threats and violence against the deputies, the Assembly will constitute a civil party alongside them”, announced Richard Ferrand (LREM), in The world, Wednesday. The President of the National Assembly met, the day before, the Minister of Justice, Eric Dupond-Moretti, and the Minister of the Interior, Gérald Darmanin. The creation of a specific census of attacks on elected officials and a “bicameral unit” (Assembly and Senate) to monitor the situation to “have a common dashboard” were discussed, relates the President of the Assembly in The world.

To deal with these threats, the Ministry of the Interior confirms to franceinfo the implementation of a range of measures. Among them, the registration of the addresses of the offices and homes of elected officials in the file Securing interventions and protection (SIP), at the request of elected officials. On December 29, 2021, Gérald Darmanin had already called on the prefects to increase surveillance of these places. Elected officials will be further supported in filing complaints and their awareness of conflict management and the re-establishment of dialogue is developing with Raid negotiators, details the spokesperson for the national police at franceinfo.

Beyond security measures, researcher Philippe Breton sees in this climate of animosity the need to maintain democratic debate. “Secession is above all a rupture of dialogue.”

Weather in El Salto today: the forecast for Saturday, January 15, 2022

Weather in El Salto today: the forecast for Saturday, January 15, 2022