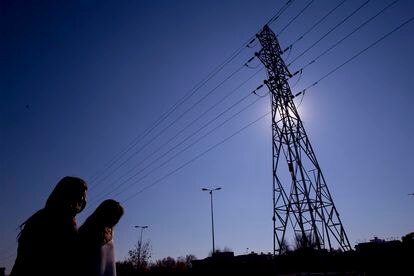 Two women walk near a power line pole in Seville, in a file image.PACO PUENTES

The escalation of electricity in the wholesale market triggered the bills of Spanish households. Families that have a regulated rate (also known as PVPC) paid 35.6% more last year than in 2020 and 33.7% more than in 2019 —the year immediately before the pandemic—, according to what appears of the electricity price index published this Friday by the National Institute of Statistics (INE). In just one month, December, when electricity broke the historical record in the wholesale market —383.7 euros per MWh on the 23rd—, the increase is 19.9% ​​compared to November and 72% compared to a year before .

Compared to the previous year in which electricity was more expensive, 2018 —which the President of the Government, Pedro Sánchez, set as a reference to promise that a figure similar to that of then would be paid— the rise in the price of electricity measured by the INE it is 15.1% in nominal terms and 11% in real terms, discounting inflation month by month since then. Sánchez, however, considers his promise fulfilled with some accounts that refer to the typical consumer both in the free market, which has been less affected by the upward spiral, and in the regulated market.

To know what happened in the electricity market as a whole —only four out of 10 contracts for individuals and companies are in the regulated market— we will have to wait for the National Commission of Markets and Competition (CNMC) to publish its data on the evolution of prices in the free market, in which rates are negotiated on a case-by-case basis between users and supply companies or for Eurostat to publish figures for the market as a whole. Unlike homes that have a PVPC rate, which are directly exposed to the volatility of the wholesale market — when prices skyrocket, as in this 2021, your pocket suffers; when they go down, they see the bill cheaper—they will feel the blow when their current contracts expire. Only those that have rates referenced to the cost of energy —a small part— are already accepting the increase.

The rise in the price of electricity began in January, with the arrival of the Filomena storm, which brought snow and cold to the center of the peninsula and triggered both consumption and prices. But that was only the beginning of what was to come. In the early stretch of spring, prices followed an upward path, but the real turning point in 2021 came in June, when both the wholesale market and retail receipts definitely exploded. Since then, records have not stopped happening, with December —the most expensive month since there are records— as a corollary.

Given the lack of official data on what happened in the free market, however, some analysis houses have begun to anticipate some patterns. In a study published this Thursday based on contracts domiciled in CaixaBank Research, the study service of this financial entity, concludes that while the median amount of receipts from the regulated market soared 32% in the fourth quarter of 2021 Compared to the same period of the previous year —and 13% compared to the last three months of 2018—, the free market fell 14% compared to the end of 2020 and 16% compared to October, November and December 2018.

Why this big difference between one and the other? The explanation is simple: the majority of households in the free market have barely felt the higher cost of electricity —yet: when it is their turn to renew they will do so— and they have benefited from the brutal snip applied by the Government on the charges, which were reduced 96% in 2021. On the contrary, for those who have a PVPC rate, this reduction in the fixed part has barely served to offset a small part of the increase in the price of a kilowatt hour (KWh). In other words: if the Executive had not left the charges practically at zero, the price increase would have been much higher, but that reduction has been insufficient to compensate for the anomalous behavior of the wholesale market.

The analysis of CaixaBank Research it also suggests substantial differences depending on the profile of the households. In the free market, bills became cheaper across the board, regardless of consumption. In the PVPC, however, differences were observed: the greater the volume of energy consumed, the greater the percentage increase. “2021 was electrifying for electricity bills, but it did not affect all consumers equally,” conclude the study’s signatories, Alberto Graziano and Josep Mestres. “And 2022 does not seem to be less: part of the increase in prices in the wholesale market in 2021 may be transferred to the free market as contracts are renewed, although if prices in the wholesale market are reduced, this effect will be temporary” . A second year of values ​​through the roof would be lethal for all consumers, regardless of their consumption and the type of rate they have contracted.

COVID: These are the types of vaccines that are applied in Jalisco