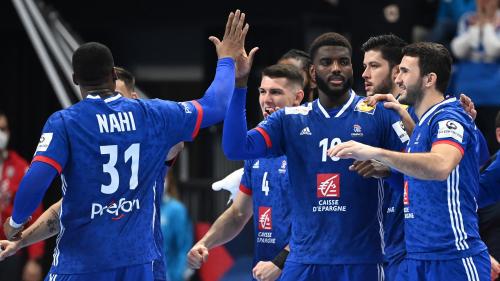 The Blues easily dominated Croatia (27-22), Thursday, for their entry into the running in this Euro 2022. Guillaume Gille’s players are now opposed to Ukraine, Saturday January 15 at 6 p.m. A match within reach of the French, which could bring them closer to qualifying for the next round. Franceinfo presents the challenges of this meeting.

France to get closer to qualification

The Blues ideally launched their Euro, after their solid victory against Croatia. It is therefore a question of confirming this good performance to facilitate the task for the next round. The Blues are in very good shape, and must not relax. “To have beaten Croatia and lost against Ukraine would call everything into question,” assured pivot Ludovic Fabregas, very prominent in the first match.

A second victory in two games would practically qualify the Blues for the next round, and this before the last match of this first phase, Saturday against Serbia. This would also facilitate the implementation of automatisms: the preparation turned upside down by the Covid-19 and the cancellation of the two friendly matches against Egypt did not allow the French to approach this Euro as well as possible.

On paper, the Ukrainian selection is not likely to scare the Blues. The team coached by Sergei Bebechko has never done better than eleventh place at the Euro and was clearly beaten by Serbia when it entered the running (31-23). “Ukraine didn’t have a good game, there was a lot of defensive largesse,” said French assistant coach Erick Mathé.

However, he is wary of a selection that the Blues have not faced since 2007, and for which they have “very little data”, with preparation matches canceled due to Covid-19. “Tackling them a little too lightly could be a trap because, honestly, this opponent shouldn’t cause us too many problems,” warned Mathé. The history pleads, in any case, largely in favor of the Blues: they won their five confrontations against Ukraine.

The Blues still not rid of the Covid-19?

Hunt the virus, it comes back at a gallop. While the Covid-19 has largely disrupted the preparation of the Blues, with nine positive cases in total before the competition, Guillaume Gille’s players are once again confronted with it. Two Croatian players, tested Friday the day after the match against France, are positive for Covid-19.

Leon Susnja and Lovro Mihic played 35 and 22 minutes of this encounter. In other words, it is not impossible that they contaminated French people. The Blues’ upcoming tests will be closely watched, although a good chunk of them are expected to be immune after the pre-tournament wave of positive cases.

Weather in Cancun today: the forecast for Saturday, January 15, 2022

Weather in Cancun today: the forecast for Saturday, January 15, 2022