Enough of so much polyamory, monogamy can also be transgressive 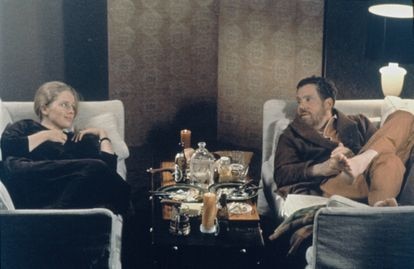 Norwegian actress Liv Ullmann and Swedish actor Erland Josephson on the set of the television miniseries ‘Scenes from a Marriage,’ written and directed by Ingmar Bergman. Sunset Boulevard (Corbis via Getty Images)

“I would like us not to force ourselves into roles we don’t want, for relationships to be easier and more relaxed,” says a very sad Liv Ullmann in an uncomfortable close-up filmed by Ingmar Bergman for Secrets of a marriage. Ullmann (or her character, Marianne) is seated in a hideous lurid green lounge suite, much to the taste of the time (1973), and she dresses with bourgeois modesty and underlined sanctimoniousness. Almost 120 years earlier, another fictional woman leaned on the windowsill and gave herself over to her own conjugal sighs: “Before getting married, she had thought she was in love: but since the happiness that should have resulted from that love did not come, she must have been wrong. , thought. And he wanted to know what exactly was meant in life by the words happiness, passion and delight, which had seemed so beautiful to him in books”, Flaubert wrote from the point of view of Emma Bovary. Bergman’s Marianne wants de-romanticize the relationships. Flaubert’s Bovary wants the opposite, that the air of novels blow a little in her cloistered life, but both women share an impotence: someone writes their biographies with a traditional script where their wishes do not count.

In the long century that separates both characters, the knot that oppressed them was untied. Feminism, democracy and the sexual revolution demolished marriage and its moralism, and the great writers of the 19th century enthusiastically collaborated in the demolition, whose works form a lengthy plea against monogamous hypocrisy (Madame Bovary, Anna Karenina Y The Regent, of course, but also Little women The Wuthering Heights). In his television series, Bergman gave testimony of its ruins and gave the final lace to the institution, obsolete and toxic for the era of the miniskirt and rock. From then on, Western secular societies normalized sexuality and love relationships, conceiving them as private matters that no one had the right to judge or restrict. The heroines of nineteenth-century novels became ghosts that only appeared in some remote place where the TV signal had not yet reached. The last act was the promulgation of equal marriage, of which the once Catholic and suffocating Spain was a pioneer. For the first time it could truly be said that everyone was happy and ate partridges. And if they weren’t and they didn’t eat them, it was because they didn’t feel like it and they asked for the vegan menu, not because the priests, the ministers and the Bernardas Albas stood in the way of their happiness and freedom.

The marital tragedy seemed over, but in recent years the curtain has risen again to represent a disconcerting epilogue. Hagai Levi, one of the masters of contemporary television, has just released an adaptation of Secrets of a marriage. The action, plot, and characters portray 21st century American middle class rather than post-war Scandinavia, but Bergman’s thesis is fully respected: monogamous heterosexual marriage corrupts, oppresses, and destroys people. The question is why Levi believes that this position has the same validity in 2021 as in 1973. Back then Bovarys and Kareninas were still abundant, homosexuality lived in a locked cabinet with seven keys and any relationship that did not go through the altar had to be clandestine or illegal. In 2021, those who do not like to get entangled in a heterosexual marriage have it as easy as those who dream of getting married at the Ritz.

And yet, the reissue of Bergman’s ideas falls on a receptive public that has become accustomed to believing that a diffuse but omniscient heteropatriarchal power pressures women to marry men and procreate. This is how it is promoted from certain intellectual environments and activists of the new left, which have found accommodation in various power structures, such as the Ministry of Equality. Polyamorous allegations as the play How crazy to fall in love with you, by Gabriela Wiener, or essays like Monogamous thinking, polyamorous terror, of Brigitte Vasallo, or relational Anarchy, by Juan Carlos Pérez, form the vanguard, while thousands of articles against motherhood and conventional relationships enlarge and fuel the debate. For these doctrines, open, multiple and unconventional relationships are not just free and private elections, but political manifestations of the struggle against sexist tyranny.

If you want to support the development of quality journalism, subscribe.

If that dictatorship exists, it doesn’t work. The marriage rate in Spain is at its historical minimum: 3.51 marriages per 1,000 inhabitants in 2019 (2020 does not count in comparative terms). Since 1976, the year in which the INE began to calculate this magnitude (then it was 7.18), it has done nothing but fall, and did not even rebound when the right was extended to homosexual couples in 2005. Marriage in Spain is below the European average, which is around 5, and well below irreproachably democratic and liberal countries in sexual matters such as Germany (5), Denmark (5.30) or Iceland (4.60). The birth rate has suffered a steady but more abrupt collapse, and is at 7.19 births per 1,000 inhabitants. In 1975 it was 18.70.

Perhaps the Leviathan puts pressure on us to get married and have children, but Spanish society blithely ignores it and is on the way to converting weddings and baptisms into marginal celebrations for minorities. The normal —understood as the most frequent— is no longer getting married or having children. The sexual revolution has triumphed in the West and those old social oppressions are the history of literature, that is why activism rebels against something that does not exist. They claim as forms of rebellion ways of loving and experiencing sex that already receive the legal protection expected of any citizen right in an open, complex and democratic society. Better said: the police no longer fine boyfriends who grab each other in the park or arrest homosexuals, but protect them, and persecute those who attack them.

As every action has its reaction, some timid vindications of the heterosexual couple appear as a form of transgression. anarchist marriage by Begoña Méndez and Josep Maria Nadal Suau, o A year with closed eyes by Carmen M. Cáceres and Andrés Barba, are two testimonial books written by four hands by couples who celebrate and enjoy their status as such. There are no domestic hells here.

of both books, the anarchist marriage it has more of an allegation character and is better adapted to the politicization of daily life promoted by certain activists of the new left. This indicates that private and sexual life is once again a battlefield, which is not good news and is not fought by adhering to one side, but rather by denying the need for war.

There are those who try to turn love into a matter of militancy, ideologizing even its most insignificant aspects, and this is not very different from what happened in nineteenth-century novels, where marriage was a political institution that forced the spouses to represent permanently a role and to act according to criteria of prestige, decency and exemplary character. The sexual revolution of the 20th century did not demolish monogamous marriage, but its conscience of moral superiority and its monopoly on relationships, and it did so through the liberal doctrine of live and let live, as the character of Liv Ullmann wanted. If sex is armed with moralistic discourses, we will return to the darkness of the clerics who point out which forms of love are correct and which are not.