Covid-19: four questions on the suspension of orders making the wearing of masks compulsory outside 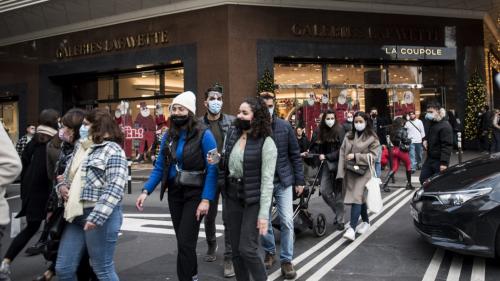 Immediately published immediately suspended. Administrative justice has suspended several decrees making it compulsory to wear a mask outside. The latest, the decree issued in Loire-Atlantique was suspended on Friday January 14. Taken at the end of December by several prefectures in the face of the deterioration of the health situation linked to the emergence of the Omicron variant, these measures were considered disproportionate.

In Loire-Atlantique, Yvelines, Paris or even in part of the Lyon metropolitan area, these decrees required all pedestrians aged at least 12 to wear a mask on all public roads and in public spaces. . But individuals and lawyers have decided to successfully bring proceedings before the administrative courts.

1Where were these decrees suspended?

The first suspended prefectural decree is that of the prefecture of Yvelines. Published on December 29 for implementation on December 31, the decree remained active for only twelve days. Four individuals accompanied by their lawyer Marion Minard seized the administrative court of Versailles, on January 7 and 10. Two days later, the judge in chambers ordered the suspension of the decree.

This first suspension was quickly followed by that issued by the administrative court of Paris, Thursday, January 13. Three law professors, Paul Cassia, Laura Vitale and Samuel François as well as the lawyer Jean-Baptiste Soufron, seized the interim relief judge on their behalf on January 3. The latter agreed with them after their second appeal, the first having been dismissed in early January. The next day, the administrative court of Nantes suspended the prefectural decree on the wearing of a compulsory mask outdoors, which applied in the 207 municipalities of Loire-Atlantique.

2What are the arguments put forward?

The courts seized all gave the same reasons. In Paris, the judge in chambers considered that the measure taken by the prefect of Paris did not meet “the requirements of strict proportion to the health risks incurred”. “By making it compulsory to wear a mask on public roads and in open public places, without limiting this obligation to places and times of high population traffic”, the decision of the Paris police headquarters was not balanced, he decided.

On the side of the Yvelines court, the judge recognized an acceleration of contamination in the department, but he considered that the measure carried “an excessive, disproportionate and inappropriate attack (…) on individual freedom”. He considered that this “obligation could only be imposed on condition that the local epidemiological situation justifies it and that the wearing of a mask is limited to places and times of heavy traffic”.

The interim judge of the Nantes administrative court, seized urgently on Wednesday with an additional Thursday, considers that the measure of the generalized wearing of the mask “infringed the individual freedom of people” in a “disproportionate and inappropriate” way.

3Was it urgent to suspend these decrees?

In each of these cases, it is a judge in chambers who was seized. These are “emergency judges”, who can take rapid and provisional measures, such as suspensions, but not the outright cancellation of a decision, in particular concerning the protection of individual rights and freedoms.

For the administrative court of Paris, the urgency to suspend the decree was “characterized with regard to the physical and respiratory constraints represented by the wearing of the systematic mask outdoors”, but also the risk of a fine and “the obstacles in terms of communication and social life”.

4What are the possible consequences?

If the prefects whose decrees have been suspended wish to impose the wearing of a mask outdoors again, they will have to modify their texts. The Administrative Court of Versailles recalls that the new decree must, if the local epidemiological situation justifies it, limit the wearing of a mask outside “to places that do not allow physical distance to be ensured and at times of heavy population traffic, as well as in places where people are brought together (such as markets, gatherings on the public highway or shopping town centers)”.

This is what is being prepared on Friday. The prefecture of Yvelines declared to AFP, “to take note of the decision of the administrative court of Versailles” and “to study it to adapt the obligation to wear a mask outdoors”, in particular in terms of zones and schedules. . A new decree should therefore be drafted soon.

The Paris police chief reserved his response to the receipt of the decision. A new order will be filed “soon”, however assured the government spokesman, Gabriel Attal, Friday, on the sidelines of a trip to Saint-Ouen, in Seine-Saint-Denis.

“The prefect has taken note of the interim order of the administrative court”, in turn replies the prefecture of Loire-Atlantique, which adds that “a new decree is being prepared”. It must be published by Friday evening.