Champions Cup: Racing wins at the Ospreys … What to remember from the first matches of the 3rd day

The third day of the Champions Cup began on Friday with a Castres defeat against Munster. Since then, fortunes have varied for French clubs. Back to the first matches of the penultimate day of the group stage.

We had to wait for a spark from Teddy Thomas. With a small kick to follow, the international winger sent Juan Imhoff to flatten the ball in the in-goal to allow his team to get their heads back in place (34th, 8-10). Because Racing 92, usually so flamboyant in the European Cup, has long lacked precision to validate its domination. This try from the Argentinian winger allowed the Ile-de-France residents to stay in the game despite a sluggish first period. They then rolled out to win (25-10) on Saturday January 15 and took a big step towards qualifying for the knockout stages of the Champions Cup. 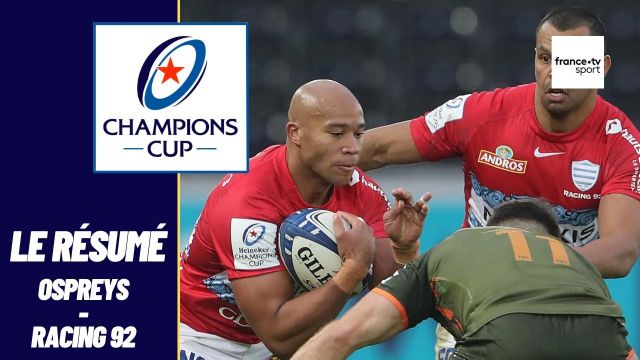 The Ospreys, long valiant and efficient, ended up giving way under the onslaught of Laurent Travers’ men. Taken aback by the creativity and support of Gaël Fickou, Kurtley Beale and even Finn Russell, the Welsh were suffocated by the physical density of the entrants – Camille Chat and Cedate Gomes Sa particularly distinguished themselves – while the young Antoine Gibert, at the melee, left no respite to his opponents thanks to a precise occupation kicking game. If it misses the offensive bonus of a try, Racing 92 has provided the essentials by consolidating its position as leader of Pool A.

The misstep of Toulouse in England

Stade Toulousain was scuttled in Coventry. In the den of the Wasps, the teammates of Romain Ntamack – captain in the absence of Antoine Dupont – offered a poor copy. Clumsy (19 lost balls), too penalized (11 faults and a yellow card against Jelonch), late in support, the European champion logically fell (30-22) against the English who never gave up.

There aren’t many positives to take away. The energy was on the side of the Wasps. There are things that bothered me this afternoon. I saw a state of mind focused on the game, it was obvious, but for all that, with each refereeing decision, everyone raised their arms… and that is not us. We will therefore refocus on the essentials and put things back in order.

at a press conference

Deprived of the defensive bonus at the end of the match, Toulouse will have to show a completely different face against Cardiff to live up to their ambitions and clinch a place in the top four of their group.

Castres still a stone’s throw from the feat

After three defeats in as many games, the Castres European campaign should end next weekend. Nevertheless, by hanging the Harlequins, then the European ogre that is Munster twice, when they were promised hell, the Tarnais have surely won more than lost. Friday night, Pierre-Henry Broncan’s players were attractive and believed they had achieved the feat until the 78th minute. A strong try from Gavin Coombes robbed them of victory (16-13).

Performances, each time obtained with a team version of the European Cup – to hear deeply redesigned -, which will be, despite the defeats, precious for the rest of the CO season. The group will try to finish in style at Harlequins in Twickenham on the final day of the group stage.