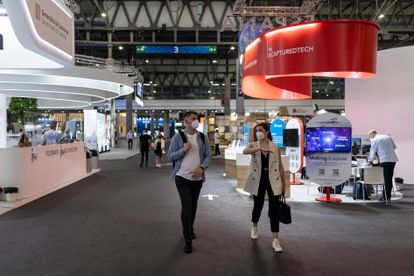 Two participants walk through the corridors of the Mobile World Congress during the third day of the show last year.Albert Garcia (EL PAÍS)

The Japanese multinational Sony will also not participate in person in this year’s edition of the Mobile World Congress (MWC), which will be held from February 28 to March 3 in Barcelona, ​​due to the evolution of the covid-19 pandemic. The Japanese firm has communicated to GSMA, the organizer of the congress, that for the second consecutive year it will give up having its own space in the most important technological fair in the world, although it does not close the door to participating in it through telematic channels.

“Sony Corporation has made the decision not to have its own stand at MWC 2022,” company sources tell EFE, which wants to take advantage of the opportunities opened by new forms of digital and online communication to publicize its products and news. “to a wider audience.” On the contrary, Sony did participate in person, and with its own stand, in this year’s edition of the CES technology show, which was held in Las Vegas (USA) between January 5 and 8.

The electronics multinational is for now the first significant loss that occurs for the next edition of Mobile, which despite the pandemic continues with its plans and would only consider modifying them if the Spanish authorities so advise. Thus, the GSMA plans that the event will be held between February 28 and March 3 in Barcelona with a considerably higher attendance than last year, when the epidemic forced to organize a much smaller Mobile than usual, which was not attended by large firms in the sector.

The employers of telephony has been “surprised by the comments” from Sony, whose withdrawal in the next room has been considered “disappointing”. “At GSMA we remain focused on organizing an essential event for all attendees. we do it with the overwhelming support of the industry, Spain, Catalonia, Barcelona and all the actors of the city of Barcelona involved”, affirmed the organization, which has underlined that it has demonstrated its ability to “offer a safe environment” in its events.

The meeting will once again combine the face-to-face and virtual offer, but the organizing company assures that it already has around 1,500 exhibitors confirmed: just over half of those it gathered before the pandemic, but 50% more than last year. GSMA, which had to cancel the 2020 edition due to the pandemic, says it has confirmed the attendance of big names such as Google, Vodafone, Orange, Deutsche Telekom, Ericsson or Nokia.

My Hero Academia will be a Battle Royale game