In Kazakhstan, the withdrawal of Russian-led forces has begun 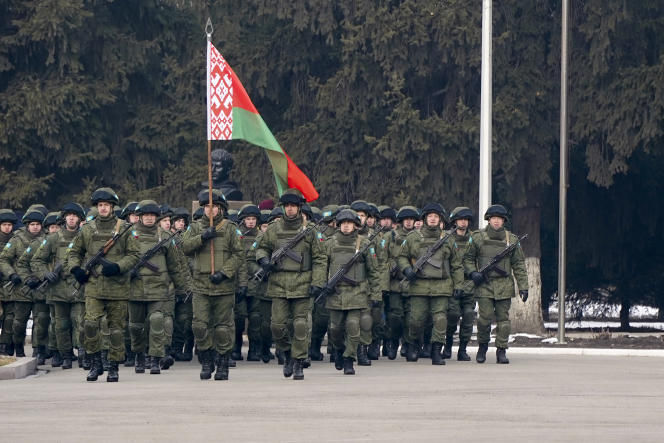 The forces led by Russia began their withdrawal from Kazakhstan on Thursday, January 13, where they had been dispatched to support the power in place in the face of unprecedented riots, announced the Russian defense ministry.

A solemn ceremony bringing together the soldiers of the Collective Security Treaty Organization (CSTO), a military alliance led by Moscow, who took part in the operation, took place on this occasion in the morning in Almaty, the main Kazakh city, according to a correspondent for Agence France-Presse.

Read also In Kazakhstan, the president announces the departure of Russian soldiers and appoints a new prime minister

“The peacekeeping operation is over (…), the tasks have been fulfilled”, welcomed, on this occasion, Russian General Andrei Serdioukov, commander of the CSTO contingent comprising 2,030 Russian troops, Belarusians, Armenians, Tajiks and Kyrgyz.

Departure of Russian forces on January 19

These men had been deployed in the former Soviet republic on January 6 and must complete their departure before January 22, according to the CSTO and the Kazakh authorities.

A first plane carrying Russian soldiers has left Kazakhstan, Russian Defense Minister Sergei Shoigu announced, adding that Moscow plans to complete the repatriation of its forces on January 19. “The CSTO forces have restored order and law, this is very important,” said Russian President Vladimir Putin. “We have to go home. Our mission has been fulfilled. “

The CSTO contingent also began to hand over to the Kazakh security forces the infrastructure and buildings they had been providing security for several days. In addition, Almaty airport, closed since last week after being ransacked, welcomed its first civilian flight on Thursday.

Kazakhstan was rocked last week by violence not seen since its independence in 1991. It left dozens dead and hundreds injured, prompted the deployment of the Russian-led peacekeeping contingent and led to the arrest of at least 12,000 people.

The most serious violence took place in Almaty with exchanges of fire, the looting of shops and the burning of the town hall and the presidential residence. The riots were described as a “terrorist attack” by the authorities, who however did not provide concrete evidence to that effect. They had erupted after demonstrations against rising fuel prices, against a backdrop of deteriorating living standards and endemic corruption in this ex-Soviet state.

Reread our chat: In Kazakhstan, as in Georgia or Ukraine, “it’s a revolt against a nepotic system monopolizing the country’s wealth”

Support from the Russian President

The version of the facts put forward by the Kazakh authorities has in any case received the support of Russian President Vladimir Putin and other countries in the region.

The Kazakh government has still not published a precise human toll of these events, while rioters and police clashed with automatic weapons, suggesting a very high number of victims.

In the wake of these deadly clashes, the President of Kazakhstan also launched an offensive against his powerful predecessor, Nursultan Nazarbayev, as well as his allies and members of his family who control entire sectors of the economy and remained very influential in the mysteries of the regime. He thus accused his father in politics of having favored the emergence of a “rich caste” dominating this State abounding in hydrocarbons.

The Kazakh president, who has spent his entire career in the shadow of his mentor, also announced that the elite, which has grown rich over the past thirty years, should provide a fund intended to “pay tribute” to the Kazakh population.

One of Mr. Nazarbayev’s strong allies, Karim Massimov, was also arrested on Saturday for high treason after being dismissed from the head of the secret service.

Read also: Understand everything about the crisis in four questions