Champions Cup: Racing and Toulouse off to a good start, UBB and Clermont between two waters … The challenges of the 3rd day for French clubs

In normal times, it is already not easy to decipher the convoluted format of the European Cup and its two groups of twelve teams. With the Covid-19, the case is more complicated. Between the postponed matches transformed into draws and the meetings settled on a forfeit, it would become almost easier to understand the rules of the closed scrum. Inevitably, the question of sports equity arises. “This competition today no longer makes sense,” swept Bordeaux manager Christophe Urios.

The third day should take place more or less normally, starting on Friday January 14. The seven French clubs will be on deck throughout the weekend. And two deadlines from the end of the hens, they are all still in the game. Overview of the different issues.

Racing, Toulouse and La Rochelle in the right wagon

In delicacy in the Top 14 (8th), Racing 92 is less bothered in the European Cup. Laurent Travers’ players, finalists in 2016, 2018 and 2020, prance at the top of Pool A. A big victory in Northampton (14-45) followed by a “success” on the green carpet against Ospreys allows them to post ten points on the counter. “We’re not far away but we’re not there yet. We have to win this weekend,” warned center Gaël Fickou all the same. A victory in Wales, Saturday at 4:15 p.m. (live on France 2), would definitely qualify Racing.

La Rochelle and Toulouse definitely never leave each other. The two finalists of the last edition have a similar record: a victory on the first day (7-39 in Cardiff for the Red and Blacks in pool B; 20-13 against Glasgow for the Maritimes in group A) then a draw on green carpet. Both occupy fourth place in their pool, with an extra bonus point for Toulouse. If they beat Bath, last in the Premiership, at Deflandre on Saturday (6.30 p.m.), the Rochelais will take a step towards the eighth. The same goes for Stade Toulousain, deprived of Antoine Dupont for his trip to Wasps, Saturday at 2 p.m.

UBB and Clermont between two waters

Was it a simple accident for the Bordeaux-Bègles Union? Semi-finalists last year, Cameron Woki’s partners were trapped by Leicester in December (13-16). Deprived of the second day at Llanelli, the Bordelo-Béglais, 7th in Pool B, receive these same Scarlets on Sunday at 4:15 p.m., live on France 2. The obstacle is not likely to scare Christophe Urios, but the UBB has every interest in aiming for the bonus victory to afford a “final” in Leicester next Saturday.

The @ChampionsCup_FR returns to Chaban this Sunday!
The context of the game
Focus on @scarlets_rugby

The scenario is equivalent for Clermont. Dried by Ulster at the start (23-29), ASM could not play Sale. The reception of the English will take place on Sunday at 6:30 p.m., at the Michelin, in a cleaver match within the reach of the Jaunards. Even if Camille Lopez “does not know if it rhymes with much”, the Auvergnats, 9th in Pool A, cannot afford missteps.

Montpellier, Castres and Stade Français no longer have a choice

Just ahead of Clermont in the standings, Montpellier benefited from a boost from the EPCR. By decreeing a package from Leinster before canceling the meetings of the second day, the body offered the MHR an enhanced victory on the green carpet. It will undoubtedly be difficult to display the same balance sheet after the trip to Dublin, Sunday at 2 p.m. Not varnished by the draw, they will then receive Exeter, winner in 2020 and clear winner of the first leg (42-6). It will take one, or even two exploits, to see Montpellier, whose last meeting dates back to December 27, in the next round.

Our Cistes continue to prepare the trip to @leinsterrugby despite 3 positive cases after PCR tests this morning.

The feat, Castres tickled him at Munster in December. Beaten by a hair at Thomond Park (19-13) after falling against Harlequins (18-20), the Castres, the only French team to have played two matches “on a regular basis”, no longer have much choice. 8th in Group B thanks to its two defensive bonuses, the CO receives the Munstermen on Friday at 9 p.m. In great shape in the Top 14, Castres does not seem to make this European Cup a priority objective. The Tarn composition on Friday evening, very reworked, will in any case not silence the most skeptical. 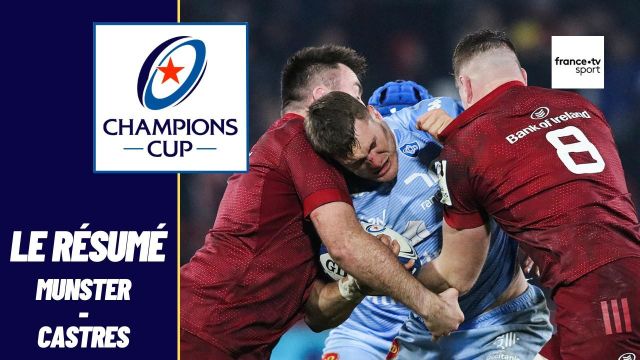 Two points is also the record posted by Stade Français, 10th in Pool B. Suffocated at Connacht on the first day (39-6), the Parisians got a draw behind the scenes against Bristol. They travel on Saturday at 9 p.m. to Bears in difficulty in their domestic championship, but with seven points in the Champions Cup… without having played a single match! This is also the charm of this European Cup Covid version. Paris has in any case no calculation to make: any other result than a victory in England would seriously reduce the hopes of the stadium.