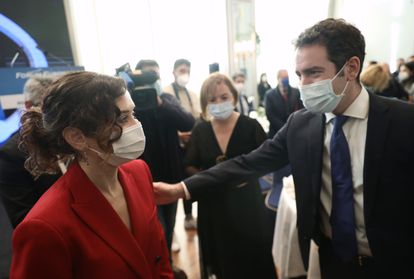 The president of the Community of Madrid, Isabel Díaz Ayuso, and the general secretary of the PP, Teodoro García Egea, at an informative breakfast on January 10 in Madrid Eduardo Parra (Europa Press)

“There is no truce, what there is is simply a postponement.” In the team of Isabel Díaz Ayuso they specify that last Monday an armistice was staged that in reality is not such. The conflict between the Madrid president and the PP national leadership over the party’s power in Madrid remains just as open and, in fact, Genoa’s latest decision on the calendar has once again raised tension with Puerta del Sol. has decided not to convene the PP congress in Madrid until after the elections in Castilla y León on February 13 so as not to hinder the campaign of Alfonso Fernández Mañueco. This leads to the conclave being held last March, because the PP statutes mark a minimum period of 45 days from the call to the appointment. The problem is that in March it will be five years since the last PP congress that elected Cristina Cifuentes, and Ayuso’s team maintains that going beyond that date is “illegal” according to internal regulations.

The truce has feet of clay. The general secretary of the PP, Teodoro García Egea, and the president of Madrid were seen together last Monday at an informative breakfast after months of dog-faced confrontation. The image was searched by the number two of the PP, who attended the event as a gesture of relaxation with Ayuso. But it had not been agreed with the Madrid leader, who followed García Egea’s game when he approached her upon arrival to enter together in front of the cameras.

Neither Pablo Casado and Isabel Díaz Ayuso have sat down to talk yet about the conflict that has faced them for more than four months. They spoke briefly a few days ago to congratulate each other on the year and on the health status of the PP leader, who has just passed the covid, but the Madrid leader’s team confirms that “there has not been a political conversation between them.” Genoa also continues without supporting the Madrid leader as president of the Madrid PP. Just yesterday, after the meeting of the steering committee, the general secretary avoided supporting Ayuso to lead the party. In congress, he settled, “whoever wants to appear, and whoever votes for him will win.”

In this context, the congress calendar is once again the object of a clash between the two parties. Genoa defends that the delay in the Madrid conclave has not been deliberate, but rather a consequence of the electoral advance in Castilla y León. “The elections in Castilla y León were not planned, they are a supervening situation in which the party has to turn 100%,” García Egea defended yesterday. “Therefore, when these elections end, we will resume our entire calendar [de congresos] with total normality ”. On the other hand, at Puerta del Sol they argue that the elections in Castilla y León do not prevent the Madrid congress from being called now, even if it is held after the appointment with the polls. In Genoa they do not agree because they believe that if they summoned it they would open a melon that would generate noise in the campaign.

The national direction assumes, therefore, that the congress of the PP in Madrid will be held in any case after the month of March. And in Puerta del Sol they warn of the “illegality” that this implies, because the statutes state that congresses must always be held every four years, exceptionally every five, and that of Cifuentes was held in March 2017. “They are already too many illegalities of a team that is going to end up paying a fine ”, they warn in the team of the Madrid president. Sources of the national leadership assure for their part that “with the statutes in hand, the congress can be held later” and invite the ayusistas “to take the measures they consider appropriate”.

There is also another scenario that could completely leave the congress in the air in the first half of the year, as approved by the national board of directors. It is the one that Juan Manuel Moreno Bonilla advances the Andalusian elections to the month of June. According to Loreg, you have to call them 54 days in advance, so if you want them to be held at the beginning of June, you would have to sign the decree, at the latest, in mid-April. The congress of the PP in Madrid would in that case remain without margin to be held, in a clamp between the elections of Castilla y León and the pre-campaign of the Andalusians. In Ayuso’s team they wonder if these delays will also affect the PP’s national congress. “Will the statutes of both Madrid and the National fail in Genoa? Because the national congress has to be held in July ”, Fuentes de Sol inquire, revealing that the truce is faltering.