The Fetus of the Mysterious Lady, the only known pregnant Egyptian mummy, resists 2,000 years “pickled like a pickle”

A team of Polish scientists investigating the first recorded pregnant Egyptian mummy has discovered that the embalmed woman’s fetus has been preserved in her uterus for 2,000 years thanks to a process similar, according to the researchers, to that of production of “pickled gherkins”. The group, from the Warsaw Mummy Project, has also managed to explain in this way why hardly any fetal bone has survived, a void that prevented its detection until last year.

The directors of the study, the anthropologist Marzena Ozarek-Szilke and the archaeologist Wojciech Ejsmond, explain to EL PAÍS that, after death, the pH of a person’s body fluids begins to change and a specific type of acid called formic acid begins to be produced. In the case of the pregnant mummy, this process created an acidic environment within it that dissolved the fetus’ bones while creating the conditions for it to “pickle.” The process was stopped as a result of the mummification of the woman, which dried her body and the fetus. “The fetus became a mummy within a mummy. It is the first time that we have two different types of mummification in the same body, ”says Ozarek-Szilke.

The pregnant mummy, known as the Mysterious Lady due to the unknowns that have surrounded her history, dates from the 1st century BC and is believed to correspond to a woman from the elite of Thebes, in southern Egypt and whose Necropolis supposedly proceeds, although exactly who he was is unknown. In fact, the mummy, its coffin and the cardboard box – a decorated cover – were acquired in Egypt by the architect and lover of Egyptology Jan Węzyk-Rudzki and donated to the University of Warsaw in 1826. But their history beyond this date is still surrounded by questions. 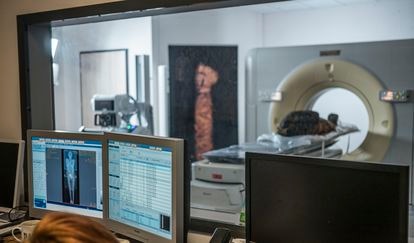 Its place of origin remains uncertain, since although Węzyk-Rudzki linked it to Thebes, it is not ruled out that it was a false attribution to increase its value by selling it to him. Likewise, recent examinations have found that the coffin and carton correspond to a person other than the mummy, who could have been placed there due to an initial error or chance by the 19th century antique dealers who sold it. And it was not until 2016 that it was certain that the mummy was not a priest but a woman.

The latest surprise came last April, when researchers from the Warsaw Mummy Project discovered, thanks to a radiological analysis, that the embalmed woman was actually pregnant, the first known case of this type. The team was also able to determine that the woman died between the ages of 20 and 30, and that at the time of death she was between the 26th and 30th week of her gestation.

In recent months, the group of scientists has focused on closely examining the fetus to determine, in the first instance, how it has survived to this day. The fetus, whose age was estimated by measuring its head circumference, was in the woman’s uterus in the position of an embryo, contracted and with the hands and legs crossed.

Ozarek-Szilke and Ejsmond say that it took so long to detect the fetus because the usual process to do so is by looking for the bones, of which in this case there was no trace. “Anthropologists always look for bones, that’s our job, and now we had the shape of a fetus, the head, the soft tissues, but we didn’t have, for example, the wrist, so the biggest question for us was’ what happened? ‘”, slides the first. 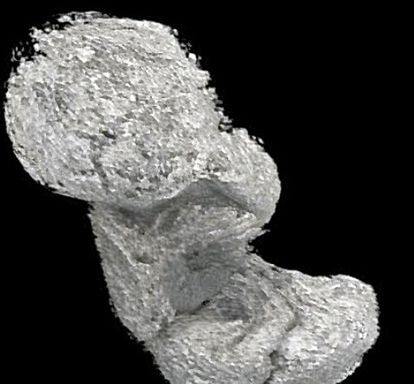 “Our study shows how to recognize a fetus inside a woman without looking for a bone, that you will not find it in the uterus, but you will [a través de] skin, muscles, and all soft tissues. We show how to find them, ”adds Ejsmond.

Despite this breakthrough, one of the main mysteries that continues to baffle the team is why the fetus was not removed from the uterus in the same way as a woman’s internal organs. In this sense, Ejsmond points out that they work on the basis of two theories. On the one hand, that they simply chose to leave it because of the difficulties of removing it without damaging the woman’s body and the fetus. And on the other, more complex, that there was some explanation or religious meaning, linked to the beliefs of the ancient Egyptians about the soul and life in the afterlife.

“I am going to travel to Egypt this year to do a study in libraries, museums and archaeological sites to look for similar cases that may provide some new information in this regard,” says Ejsmond. “We hope we can solve it.”