Strike in National Education: “There is a weariness linked to the gap between reality and ministerial announcements”, testifies a principal 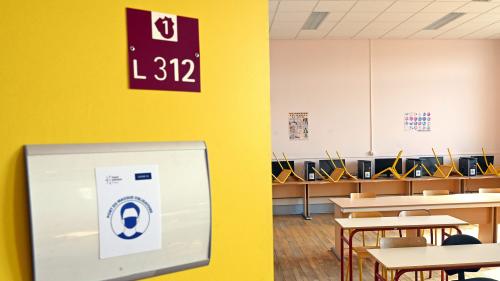 “There is great fatigue to which is added a form of weariness linked to the gap between reality and ministerial announcements”, explained Wednesday, January 12 on franceinfo Didier Georges, principal of the Jean-Drouant high school in Paris and national secretary of the SNPDEN (National Union of National Education Management Staff) in charge of communication, while a strike took place Thursday, January 13 in National Education against the Covid-19 protocol implemented in schools.

franceinfo: Why are you joining the strike movement?

Didier Georges: Because of a great fatigue like everyone else to which is added a form of lassitude which is linked to the discrepancy that we perceive between the reality on the ground and the ministerial announcements on a certain number of points. Seen from the rue de Grenelle, things seem easy but it is we who manage the dissatisfaction, in particular of the users. We implemented dozens of different protocols, the first being very spectacular, on things we had never done. We are told of replacements for absent teachers when we have no or little when there is no Covid, we are told of means that we do not see happening. The means are there, but there are no human resources. So the announcements are out of step with reality and parents don’t understand why their child doesn’t have a math teacher, but the point is, there isn’t a math teacher.

What are you waiting for with this mobilization?

Make the ministry aware that things still need to be improved. We are going to make a demand for contact tracing for management staff because it has become impossible to do, and a simplification which concerns staff so that we are less in difficulty when we no longer have a nurse. We all have a certain percentage of sick teachers today.

Do you have the impression that you are being heard by the Minister of Education?

He hears us, he receives us, he questions us. After that, does the reality of what has been fed back to him by his services correspond to what we are experiencing? Not always, there is a definite lag. When he delegates resources and announces it, that does not necessarily mean that there will be immediate action opposite. Often there is a time lag. We are talking about surgical masks, there are already some in some establishments and when there is none, by the time they arrive, maybe this umpteenth crisis will be over.

Jean-Michel Blanquer speaks of pragmatism, of benevolence, of not going on strike against a virus. What do you think ?

I don’t really like to comment on the minister’s remarks, nevertheless sometimes you have to be right to be right, especially when you are in a crisis where you feel that the mobilization is going to be extremely important. I wonder if the words are well weighed. Obviously we have to show solidarity, but we don’t have to prove that we did it. We’ve been doing it for 24 months, we’ve all been fighting for 24 months, teachers, teachers, school life, staff in schools, so that children have as many lessons as possible. We are really very attached to it. We have nothing to demonstrate. Parents can attest to this. The minister’s communication via the media before the personnel, incessant reversals of the situation is exhausting.

Is it important to have parental support?

This is important because they recognize the work that is done by teachers, the people who supervise their children on a daily basis in schools. We are satisfied with that. But let’s not forget that parents are also feeling the effects of this crisis. The new protocol announced by the minister does not solve all the problems. It simplifies for users and parents of students the fact of having only self-tests to do, but in schools this does not solve the problem of certificates to be provided on the basis of what? A self-test? It is not so simple. For us, administratively speaking, this does not make our life much easier.

How will the reception of the students be going during the strike?

Participation should be massive. Some teachers who did not intend to be on strike will be because of comments made by Jean-Michel Blanquer on the strike against the virus. Among the staff who are often at the forefront of this fight against Covid there are supervisors, education assistants, canteen and maintenance staff and they are particularly there and we do not talk much about them. There is a real fed up. Many colleagues will not have school life staff tomorrow and have therefore had to close the canteen, close the boarding schools. It is quite unprecedented that we are massively obliged to suspend a certain number of school services.