In Brittany, Hénaff changes the image of his legendary metal box of pâté 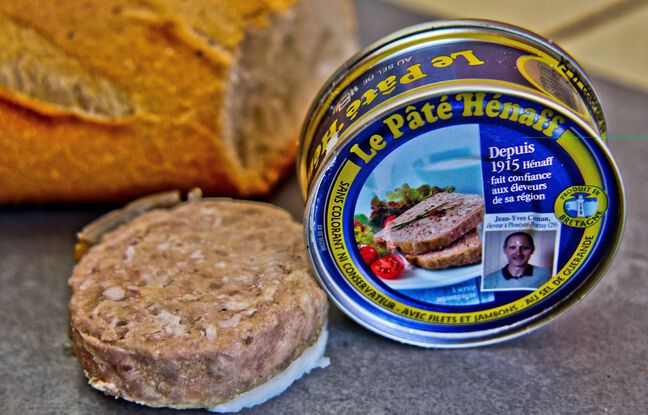 It is an almost century-old box that no one dares to change. Created in 1915, the traditional blue metallic can that contains the famous Hénaff pâté will be given a makeover. The announcement was made on Thursday by the Breton company based in Pouldreuzic, in the southwest of Finistère. For two days, the SME specializing in pork processing has been teasing on its social networks, raising fears of the imminent disappearance of its metal box, which has become a must. The announcement is almost disappointing as the “new look” is so close to the old one.

Unchanged for more than sixty years, the design has been redesigned “to enhance the commitments carried by the brand”, explains the company in its press release. “The blue box becomes the standard-bearer to embody the responsible approach”, proudly displaying the local origin of the meat. A facelift that will have consequences for the SME. Each year, around 35 million Hénaff cans are sold worldwide, giving the brand the place of the best-selling pâté in France.

After two days of teasing on its networks, the company @JeanHenaffSA has solved the mystery around the “disappearance” of his box of pâté. We are simply talking about a change in design, which had not been done for 60 years. Here is the before and after. #Brittany pic.twitter.com/7dc2XgctcI

Used since 1915 and its invention by Jean Hénaff, the small blue and yellow canister has not changed much in a hundred years. Only a small makeover had been carried out in 1959 by the famous designer Raymond Loewy, known for having designed the logos of the brands LU or BP. It has been manufactured for over a hundred years by the Douarnenez Massily-Franpac company, which brings its steel from Loire-Atlantique.

The rise in the prices of raw materials raised fears of an abandonment of the metal box. In one year, the price of steel has soared by 50%, in particular because of the appetite of the Chinese economy, endangering many canneries. But the Breton SME did not want to change the packaging, even if the latter alone represents between a quarter and half of the cost of production. “There is a danger of death”, launched Loïc Hénaff in an interview with Telegram in October.

The Finistère company employs a little over 280 people and is managed by Loïc Hénaff, whose great-grandfather had founded the cannery to help his friends, market gardeners and fishermen to sell their goods. Over the years, the brand has established itself as the “pâté du mataf”, the pate of the sailor in Breton. The know-how of the Pouldreuzic cannery has even been exported to space. In 2013, Hénaff entered into a partnership with chef Alain Ducasse to concoct around fifteen ready-made meals reserved for astronauts on the International Space Station. The Breton company was then the only French company with the USDA approval necessary to export meat products to the United States.