COVID: In full isolation, AMLO gives a message without a mask and accompanied by secretaries

For the second time, President Andrés Manuel López Obrador (AMLO) was infected with COVID-19 and, despite the fact that he is a carrier of the virus and can easily transmit it, The Mexican President remains reluctant to use the face mask as a preventive measure.

This Thursday a video was published in which, despite being in full preventive isolation, the President chairs a meeting with the Secretary of the Interior, Adán Augusto López, and the head of the Treasury, Rogelio Ramírez de la O, in which communicates without any protection, while members of his cabinet do wear a mask. 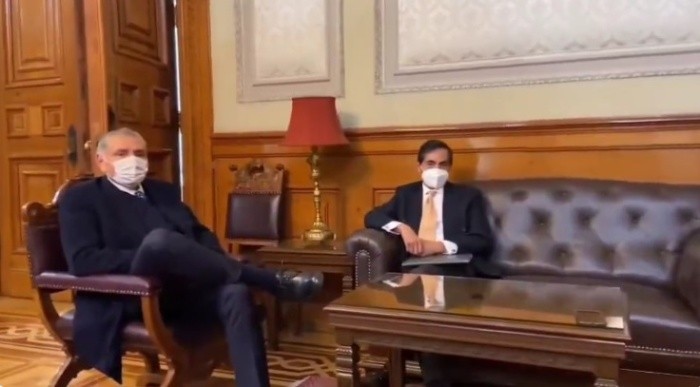 The Secretary of the Interior, Adán Augusto López, and the head of the Treasury, Rogelio Ramírez de la O, use their face masks correctly in the video. SPECIAL

During the recording, the President assured that “COVID is coming out” thanks to home remedies such as Vick and honey with lemon, statements that Jorge Alcocer, Secretary of Health, had already made and that were criticized on networks.

There are few occasions in which AMLO has been seen wearing a face mask, but in his morning conferences he never uses it, which has sparked conflicting comments due to the obvious risk of contagion to which people who attend the event are exposed every day. .