The unlimited card of a PDVSA looter: villa in the Caribbean, jewelry, watches and dream hotels 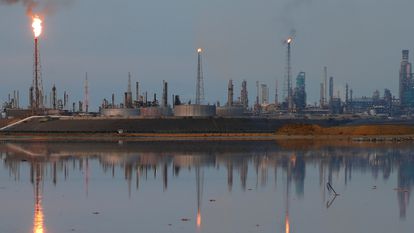 General view of the Amuay refinery, in the State of Falcón (Venezuela), owned by PDVSA, in 2016 Carlos Garcia Rawlins (Reuters)

José Luis Zabala is a fashion enthusiast for Ermenegildo Zegna and Louis Vuitton bags. In 2009, this Venezuelan insurance broker spent 219,468 euros on these firms. Another of his passions are watches, especially luxury Swiss watches. For example, he paid € 149,900 to purchase an exclusive gold copy of a limited edition Jaeger-LeCoultre in 2010.

Zabala’s credit cards seemed to have no limit and to feed on a bottomless pit, his millionaire accounts hidden in Andorra. The analysis of the invoices and their bank movements, to which EL PAÍS has had access, reveal the passion for the good life of this Venezuelan businessman who has been prosecuted since 2018 in the Pyrenean principality for participating in the looting of one of the main energy companies public companies in Latin America, Petróleos de Venezuela SA (PDVSA).

The charges for the cards and the transfers confirm that between 2008 and 2012 —when the theft of the oil company was concocted—, Zabala paid more than four million euros in jewelery, hotels and works of art. He also acquired a villa in an exclusive urbanization in the Dominican Republic.

The businessman, who did not work at PDVSA, is indicted in Andorra for his links with one of the members of the plot that plundered the public company, the Venezuelan insurance magnate Omar Farías.

Zabala, 48, spent 646,000 euros in 2010 alone to accumulate jewelry and watches. Along with the Jaeger-LeCoultre for almost 150,000 euros, he bought a rose gold IWC that same year for 155,000 euros. From this Swiss firm he bought another five copies, among which also stand out one in platinum of the Big Pilot aviator model (34,445 euros) and another in white gold (18,190 euros). A woman’s Parmigiani Kalpa, in gold with diamonds and hand-mounted, at a cost of 18,190 euros, also became part of the Zabala collection, in which there are also several Patek Philippe pieces. The prosecution spent 126,760 euros in stores of this last Geneva manufacturer of luxury watches.

The jewelry chapter is completed with payments of 20,800 for 18-karat gold earrings with diamonds; € 13,000 for a rose gold ring with precious and brilliant stones, and € 800 for three Cartier pens. In addition, Zabala paid 27,380 euros in the Wempe jewelry store in Madrid. 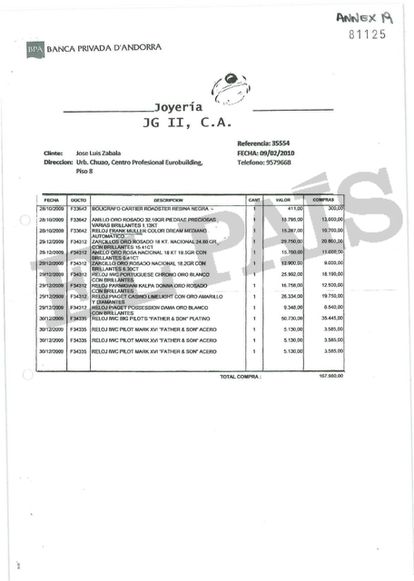 Art was another of Zabala’s refined hobbies during the years of the PDVSA plunder. € 855,000 was spent on this chapter. The insurance broker paid in 2010 a total of 370,000 euros for the work Psysichromie number 507 by the French-Venezuelan artist Carlos Cruz-Díez, a piece, from the Denise René gallery in Paris, which belonged to the Venezuelan intellectual Alfredo Boulton, according to a document from the seller, the Caracas Graphic Art gallery.

Zabala also paid 485,000 euros in 2010 for Lovers, a sculpture modeled in 1985 in bronze by Colombian Fernando Botero. The piece included a certificate of authenticity signed by the author himself. “Work of my hand”, reads the guarantee.

The documents show that the insurance broker gave a signal of 602,000 euros in January 2011 to acquire a luxurious 915-square-meter villa valued at 1.7 million euros in the exclusive urbanization of Cap Cana, in Higüey, a tourist municipality of the Dominican Republic. And that Zabala spent 33,645 euros in 2014 on different repairs to improve the garden of this property called Villa Marina Cap Cana. 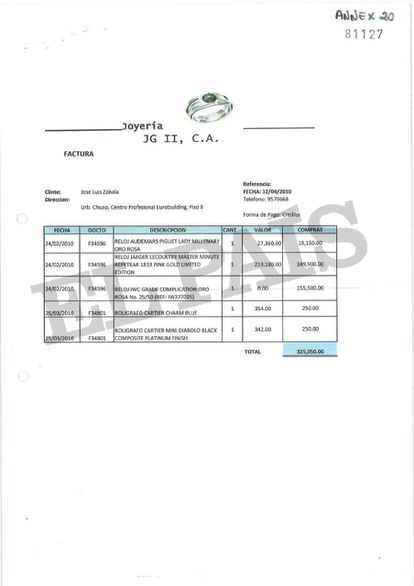 The account in the hotels and restaurants section was also bulky. It added more than 100,000 euros. Although Zabala had a predilection for staying in establishments of the Marriott International chain (48,500 euros in expenses) and Mandarin Oriental (27,192) in Cancun (Mexico) and the United States, the traveling journey of the insurance entrepreneur led him to other hotel firms to enjoy dream stays.

His card records marked his footprints around the world. In Miami Beach, he passed by the exclusive Bal Harbor shopping center. In Rome, he visited the Eden hotels (10,000 euros) and St. Regis (4,401). In Madrid, the Villa Magna (5,855) and the Ritz (1,968). And, in March 2011, he even went through the emblematic Bellagio (437 euros) in Las Vegas. This is revealed by bank movements that also register payments of 88,358 euros at the El Corte Inglés supermarket chain, 12,901 euros at Galeries Lafayette and 11,200 euros at the Le Meurice spa in Paris. His life insurance for the period 2011-2012 with the New York Life Insurance Company amounted to 96,000 euros.

Zabala ordered most of these payments from the Banca Privada d’Andorra (BPA), where since 2007 he controlled two accounts. One in his name, which he shared with Ailyn Saireth Meneses Rosillo, and another under the name of the Panamanian company Greentrail International Inc.

The latter was established by the Panamanian law firm Alcogal, an insatiable producer of companies offshore for fraudsters all over the planet. In the document known as know your customer (Know your client, in English) —a sort of third degree to which the bank subjects its clients to explain the origin of their funds—, Zabala introduced himself as manager and president of several companies of another of those prosecuted in Andorra for the looting of PDVSA, the insurance businessman Omar Farías.

And he told the financial institution that he chose the BPA, where he planned to transfer 900,000 euros every two months, for “security and confidentiality.” Andorra remained shielded until 2017 by bank secrecy. 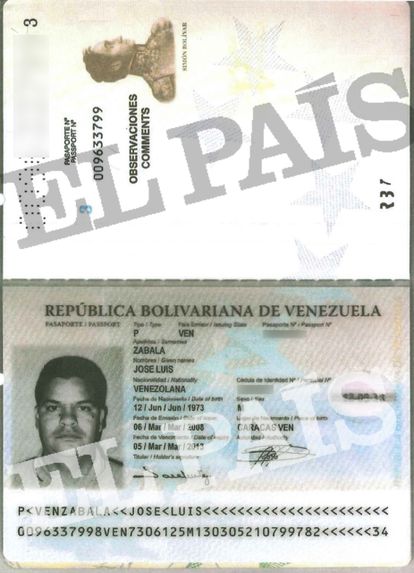 Zabala’s credit card charges were charged to his accounts at the BPA. In 2009, he collected 14.6 million there. The money came from the instrumental company Highland Assets Corp SA controlled by Luis Mariano Rodríguez, alleged front man of Diego Salazar, cousin of the former Minister of Energy of Venezuela with Hugo Chávez, president of PDVSA and former ambassador to the UN, Rafael Ramírez. To justify these payments, the Venezuelan insurance broker presented the bank with a service contract.

The investigators investigating the looting of 2,000 million from the Venezuelan energy company frame this transfer in a proper mechanism of money laundering and connect it with the plundering of the public company. They question the proof that Zabala wielded before the bank to accredit the millionaire payment, some supposed advisory services. “It is suspicious that these types of services are paid in a single installment”, includes a confidential report from the Andorran Financial Intelligence Unit (Uifand) last February.

THE COUNTRY has not been able to obtain Zabala’s version.

In 2018, an Andorran court prosecuted about thirty people for the looting of PDVSA, including Zabala, Farías and the former vice ministers of Energy of Venezuela Nervis Villalobos and Javier Alvarado. Since then, all have been accused of laundering and collecting bribes for asking for alleged illegal commissions from companies, especially Chinese, which were later awarded millionaire awards from the Venezuelan oil company.

The network operated between 2007 and 2012 and resorted to laundering its loot to a complicated skein of some thirty companies based in tax havens such as Belize or countries protected by bank secrecy, such as Switzerland or Andorra. The money allegedly stained by the corruption of the oil company flowed into the deposits of the BPA, an entity intervened in 2015 for participating in an alleged washing of funds from international criminal groups.