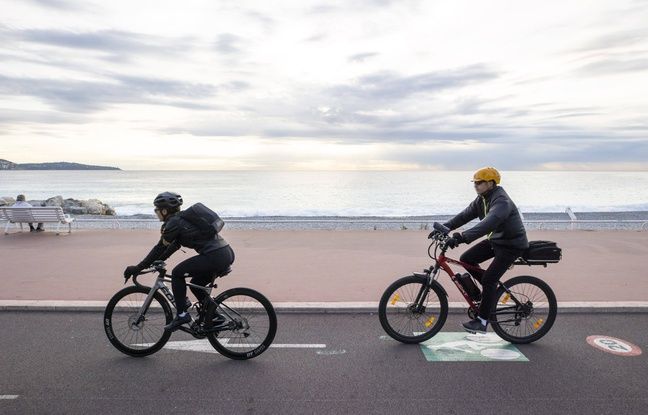 What if the helmet became compulsory for cyclists over 12 years old? Only a third of cyclists wear it for the moment, according to the Observatory of road safety. A bill to be discussed in the Senate on Thursday proposes to make cycling helmets compulsory, a measure inspired by the strong growth in the number of cyclists since the pandemic, but already condemned as counterproductive by most representatives of the sector.

Helmets are already compulsory on bicycles for children under 12 years old, and for users of scooters outside town.

While the practice of cycling is exploding, a group of centrist senators led by François Bonneau proposes to make the helmet compulsory for “any driver of a vehicle with one or more wheels, whether motor or electric assistance, as well as ‘to any cycle driver’, under penalty of a fine of 135 euros.

“Nearly two-thirds of fatally injured cyclists were 55 years and over in 2019” and “head trauma is the main cause of death among cyclists,” said the senator in his proposal.

“It seems that this is a false good idea,” reacted Françoise Rossignol, president of the Club of cycling towns and territories, Tuesday at a press conference. “So that there are more bikes, we must not put the brakes on practice”.

“Safety is linked to the speed of other vehicles, to visibility (of the bikes), and to a number of essential arrangements for safety on the course”, underlined Françoise Rossignol.

The associations are unanimous: the Federation of bicycle users (FUB) is also “resolutely opposed” to any law that would prohibit cycling without a helmet, she says on its site.

The Senate Law Commission did not adopt the bill, stressing that the obligation to wear a helmet does not fall under the competence of the legislator but is regulatory, and therefore depends on the government.

According to the rapporteur of the text, Senator Jérôme Durain (Socialist Group), “a balance must be found between voluntarism and prudence, given the interest of wearing a helmet on the one hand, and the risk of discouraging the practice of somewhere else “.

However, the committee invited the government to consider making the wearing of helmets compulsory at least for electric scooters, hoverboards and gyropods. “The danger of traveling on board these machines is proven, and users seem to be in favor of it”, underlines the rapporteur.

In addition, the possibility of immobilizing or impounding a bicycle or a scooter if a helmet is not worn was considered “disproportionate”, “complex and costly” by the committee.

“Foreign studies which have looked at behavioral changes following the obligation to wear a helmet all conclude that the number of cyclists has decreased”, underlines the FUB, citing the examples of Canada, Australia and New Zealand. -Zeeland. On the other hand, the number of injured is not decreasing as much as we expected, continues the association.

In France, the idea is not new: proposed several times to parliamentarians, it was rejected by the National Assembly in 2019, after heated debates and with a divided LREM majority.

“The French are fed up with having obligations imposed on them,” said Elisabeth Borne, then Minister of Transport. “We recommend wearing a helmet and everyone takes their responsibilities.” “Let’s stop pissing off the French,” Bruno Millienne, MoDem co-rapporteur, argued, believing that with a helmet one could falsely feel “safer”.

Nuclear: another delay for the Flamanville EPR

COVID in Jalisco: How long will bars ask for the vaccination certificate?

In his attack on ‘wokism’, the French philosopher Pascal Bruckner shuns nuance like the plague (●●)

COVID in Jalisco: How long will bars ask for the vaccination certificate?