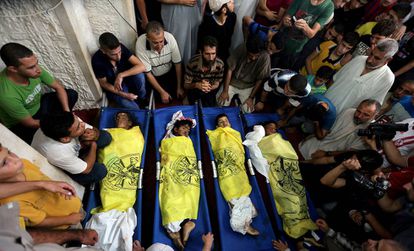 Funeral of the four children killed in Gaza in an Israeli attack, on July 16, 2014.

The image of the corpses of four boys killed by a drone on a Gaza beach symbolizes the tragedy of the 2014 war in the Palestinian Strip, the longest fought by Israel after establishing itself as a state. The families of the minors are still fighting for justice to be done. But the Army and the attorney general shelved the investigation. They alleged that the drone operators mistook the children for Hamas militants in a coastal area considered a military target. From a nearby hotel, foreign journalists covering the conflict, however, only observed a few kids who played soccer in the sand. The Supreme Court is now reviewing the file of the proceedings for the first time after an Israeli NGO revealed the contradictions contained in a secret military report.

They were four cousins, all members of the Baker clan, a line of fishermen that gives its name to a fishing district in the capital of Gaza. Ismail, aged nine; Ahmed, 10; Zacaría, 10, and Mohamed, 11. They were killed by the impact of two missiles fired from an Israeli drone gun in the early afternoon of July 16, 2014. The Supreme Court of Israel heard on Monday the allegations presented by three defense organizations of human rights against the closure of the investigation into his death. It was decreed by the military attorney general in 2015 and ratified by the State Attorney General’s Office in 2019. The NGOs Adalah (based in Haifa, Israel) and Al Mezan and the Palestinian Center for Human Rights (based in Gaza) have been giving the legal battle on behalf of the Baker family to get justice.

The Israeli high court will rule in the next few days on the request to reopen the case, but legal sources point out that the magistrates have already expressed their conviction that the events occurred in a military zone and in a period of war. The Supreme Court said it had received a confidential report from the espionage services that defines the perimeter of the beach and the port where the four children died as a military objective.

The same sources specified that the president of the court, Esther Ayut, had highlighted that the military intelligence report had been prepared shortly before the attack took place. Lawyers for the three NGOs did not have access to the content of the confidential report, allegedly for national security reasons.

The representatives of Adalah, the Center for the Legal Defense of the Rights of the Arab Minority in Israel, they flatly rejected that argument during the hearing. They warned that this area of ​​the beach is a civil area, where children usually play, and it is also close to hotels frequented by international journalists in their news coverage in Gaza. Among other reporters, teams from the French chain TF1 and the Qatari Al Jazeera, and the correspondents of the British newspaper The Telegraph and from german Frankfurter Allgemeine Zeitung they were witnesses to the events. All confirmed that it was a group of minors who played soccer. None of the journalists has been summoned to testify in the investigations opened by the Israeli justice system.

The attorneys representing the Baker family They further argued that, even if it were a military zone, international humanitarian law establishes that the Army has the obligation to verify whether there are combatants or civilians on the targets before launching an attack. According to the allegations of the NGOs, the Israeli military accepted the intelligence information that located a Hamas depot on the beach, and therefore justified the decision to open fire on anyone who crossed the perimeter.

The limits of a war objective

In an internal report of the Military Police on the case, which was revealed by Adalah in 2018, it is specified that the operator of an armed drone fired a first missile at the tank, in which one of the children had been hidden. He died on the spot. The rest of the boys started running, as can be seen in the video recorded by TF1. The operator then requested clarification by radio on the limits of the military zone in which he could act before opening fire again.

Receiving no response, he launched a second missile half a minute later, which It caused the death of three other Baker cousins ​​and serious injuries to a third. The army has refused to release the video recordings of the drone control center at Palmachin air base south of Tel Aviv to the family’s lawyers.

The NGOs that have defended before the Supreme Court of Israel the reopening of the investigation and the prosecution of those responsible for the deaths of the four minors argue that the Air Force opened fire “on purpose” against the children “without prior identification and without prior identification. take the necessary precautions ”, in a serious violation of the laws of war. A Adalah spokesperson has stated that “the case of the death of the four boys from the Gaza beach reflects a policy of total impunity for the soldiers and officers of Israel.”

The Palestinian Center for Human Rights considers in a statement that the “Israeli judicial system conceals war crimes committed by the Army against Palestinian civilians.” “The case of the Baker boys is the most flagrant example, and consequently, the appropriate body to determine responsibility is the International Criminal Court,” concludes the Palestinian NGO. When this correspondent first visited the Gaza Strip, months after the death of the four children on the beach, Ahmed Baker, father of little Zacaría, was already anticipating that course. “We only trust international justice,” proclaimed the patriarch of the fishing clan, “and I will go to the Court of The Hague even if it is walking.”