“Ouistreham” by Emmanuel Carrère, based on Florence Aubenas’ book: a social film to “make the invisible visible” 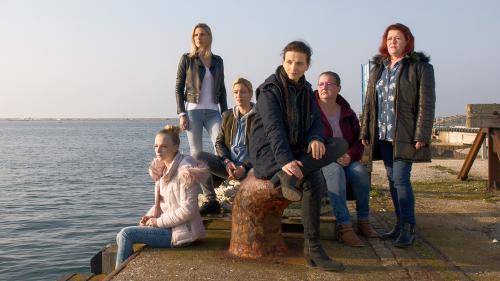 Last Cannes Film Festival: July 7, 2021, Emmanuel Carrière’s Ouistreham is the opening film of the Directors’ Fortnight, a parallel yet prestigious section of the festival. Absent from the room, Juliette Binoche, main actress of the film, makes a remarkable intervention, in videoconference from the United States. “I’m not with you tonight. But sort of it’s a good idea. Because the unseen will be visible tonight.” The “invisible” are the women and men to whom the film is dedicated, which hits theaters on Wednesday January 12th.

Ouistreham by Emmanuel Carrère is the adaptation of the book by journalist Florence Aubenas, Le quai de Ouistreham. A recognized writer, Marianne Winckler, played by Juliette Binoche, settles near Caen where she is hired in a team of maintenance agents to observe their working conditions and testify to it in a book. A sort of Wallraff method, named after the German journalist who testified about the harsh living conditions of Turkish immigrants in Germany by posing as one of them in the 1980s. But unlike Günther Wallraff who in his time s ‘was grimaced, Marianne Winckler does not reveal her identity but plays with her face uncovered.

Immersion is bearing fruit, and Marianne cannot hide her satisfaction at having found, for example, in Christèle, one of her new, determined and courageous colleagues, “the portrait” she is looking for: “we hold the book” , she wrote in her notes. From this point of view, the filmed account of Emmanuel Carrère is convincing. If Juliette Binoche is very fair in her double acting (both secret journalist and housekeeper, her hands literally in the toilet bowl), the other actresses, non-professional, and for the most part maintenance workers by trade, are crying out for the truth.

Ouistreham thus gives to see the daily life of these “invisible” (which Marianne aspires, the sentence is quoted thus in the film), men and (especially) women working in precariousness, with very long travel times and in conditions of great physical hardness. The most striking shots take place on the ferry that runs between Ouistreham and Portsmouth. “The ferry is the commando operation”, summarize the colleagues, almost amused, as the conditions are difficult. In 1h30, the time of the port stopover, 60 beds must be made, and each cabin in less than 4 minutes. The look is military. And fatigue can be read in the eyes and postures of women.

The film also points to the contempt for all these workers, both among recruiters and other colleagues of a supposedly higher rank. Likewise, it shows with finesse the enthusiasm of solidarity and mutual aid and the moments of relaxation around a bowling alley or a starting drink. Ouistreham reserves here some beautiful scenes with irradiating humor.

If the adaptation of the book by Florence Aubenas – who took a long time to agree to cede his rights – is intended to be a work of fiction and integrates new elements into the story, Emmanuel Carrère does not stray far, in reality, from d ” documentary processing. We could have waited for a more daring staging bias to get film production off the ground. As it is, it espouses in any case the militant ambition – but it is already very laudable – expressed by Juliette Binoche during the presentation in Cannes: “the film is made for them (for the invisible ones, editor’s note). For them and for all of us. To have a little more awareness. Respect for them, if not love, “she concluded.

Synopsis : Marianne Winckler, recognized writer, undertakes a book on precarious work. She settled near Caen and, without revealing her identity, joined a team of cleaning ladies. Confronted with economic fragility and social invisibility, she also discovers the mutual aid and solidarity that unites these shadow workers.