Mexican automotive production linked four years to the decline in 2021

The global problem of semiconductor shortages, as well as the various variants of the COVID-19 pandemic and the increase in the cost of maritime transport, prevented Mexico from exceeding the barrier of 3 million light vehicles produced in 2021, thereby which added four consecutive years of declines in car manufacturing.

Automotive companies manufactured 2 million 979,276 light cars at the end of 2021, which represents a decrease of 2% compared to January-December 2020, when the industry was facing the worst downturn in its history.

According to the Administrative Registry of the Automotive Industry of Light Vehicles (RAIAVL) published by Inegi, the export dynamism of the automotive industry had a slight increase of 0.9% from January to December to 2021, when 2 million 706 thousand 980 exported units were shipped, mainly due to the demand of the US and Canadian markets.

The main export market for Mexican cars, the United States, fell 3% during 2021, where automotive companies shipped 2 million 71 thousand 668 units, despite the fact that there are many customers who want to buy new cars at high prices. Nevertheless, the problem of computer semiconductors persists so that the industry can start up its factories.

At the beginning of 2021, companies in the automotive industry were affected by the lack of energy in the north of the country and frost in the United States, while in the middle of the same year the impact of semiconductors began, factors that led to a December with the lowest production figure of 212,272 light vehicles in the last decade, falling 16.5% compared to the same month of 2020.

Both decreases represent “the largest annual decline for a month of December since it has been registered (2006),” according to a report by Grupo Financiero BASE.

In December, production was affected at the automotive plants of: Audi in San José Chiapa, Puebla and Mazda in Salamanca, Guanajuato. IHS Markit estimated that depressed vehicle production levels will affect lead times for some time, putting pressure on depleted inventories and delaying the fulfillment of current orders.

“The path of the pandemic remains a major driver of the 2022 auto demand cycle, especially the race between vaccine and variants. Concerns remain and the appearance of the omicron variant represents a worrying development, “said Colin Couchman, executive director of global light vehicle forecasting at IHS Markit. 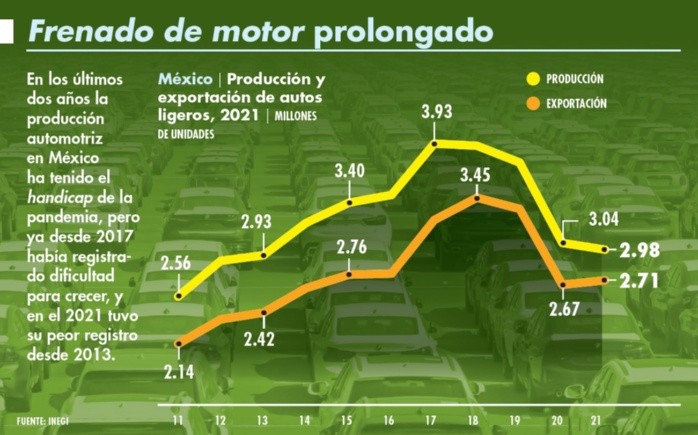 Mexican automotive exports to the US do not achieve precovid level

Mexican auto exports to the United States failed to reach their pre-COVID-19 pandemic level in 2021, according to data from the Commerce Department. From January to November 2021, these sales were for 117 thousand 431 million dollars, a fall of 7.1% compared to the same period of 2019, so, apart from the result of December, they will not be able to fully recover from their fall of 2020.

According to a report from the Treasury Department, bottlenecks in the supply chain continue to push up the prices of some goods; In particular, inflation rates for new and used cars rebounded in October as semiconductor shortages continued to constrain companies’ ability to replace tight inventories and meet demand in the United States.

The lack of semiconductor chips is the main obstacle that hinders the growth of Mexican automotive exports.

Sales have an outstanding contribution: they cover 26.3% of the total exports of products from Mexico to the world.

Wall Street is having one of its worst days since 2020

Banxico: Is inflation in the country out of control?

Fighting ‘the Viking’: family behind Belgian shipping company is pulling out all the stops to save their “baby”