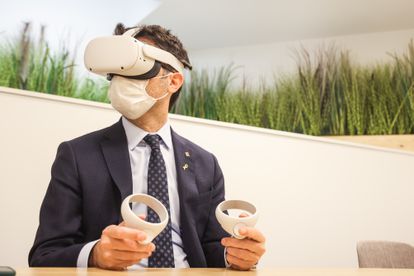 Catalonia already has, as of this Monday, its own metaverse, a virtual space inspired by the one presented by the founder of Facebook, Mark Zuckerberg, but entirely in Catalan. The Catalan Government and the Barcelona Chamber of Commerce have presented the CatVers, in which citizens, companies and creators will be able to talk, work, do exhibitions and do business. The project has been led by the Blockchain Center of Catalonia, for which the Government has assigned a budget of 400,000 euros this year, and which is chaired by Quirze Salomó, founder of the Nostrum prepared food chain, which ended in liquidation in 2019 after his inability to renegotiate the debt. Salomó has not specified the investment that this first phase of CatVers has required, nor has he detailed which companies or entities have shown interest in participating in this virtual environment. In any case, the vice president of the Government, Jordi Puigneró, has considered that the Catalan metaverse is “one more step towards the digital republic”.

The metaverse concept is one of the technological innovations that have had the most prominence in the last year. In autumn, the multinational Facebook, in the midst of a reputational crisis after the leak of internal documents by a former employee, changed its name to Meta, and Zuckerberg presented his great project to create a virtual world in which users can, through virtual reality glasses, do everything: leisure, work and shopping. And the Catalan Government has considered that it has to promote its own space to be in line with the technological trends that are coming: “The metaverses will be in common use in three years, and universal use in five years, is what is said and we are convinced. The big companies are betting on this and we have to try to keep up with it ”, said Puigneró at the press conference. “Surely we are still not sufficiently aware of the potential of this immersive reality, but we are clear that Catalonia must be there”, he added.

Precisely, the press conference was held in this virtual environment. Puigneró, Salomó and the president of the Chamber of Commerce, Mònica Roca, have donned virtual reality glasses and, already as virtual avatars, have explained, with many technical sound problems, the objectives of this project to journalists who have also entered the virtual room. “The CatVers will be available to companies, universities and creators in the country, who will be able to have this space to make exhibitions, for example, and monetize the space,” said Salomó. Puigneró has compared it to the arrival of man on the Moon and the words of Neil Armstrong: “This is a small technological step but a great step to understand what the relationships of the 21st century will be like. It is a virtual reality that will complement the physical one ”. “Not only will it be a metaverse developed in Catalonia, and inspired by our culture, but also the vehicular language will be Catalan. The defense of Catalan in all areas of our society is a priority of the Government. The survival of our language depends on its use in the new virtual world ”, said the vice president. The president of the Chamber has assured that this virtual environment can generate business: “It has a much greater transformative capacity, although it may be thought that we are in a game. Metaverses are virtual realities that can generate a lot of wealth ”.

The technological tool is indeed reminiscent of virtual entertainment environments that have years of history on the Internet, such as Habbo Hotel or Second Life. So what makes the metaverse different from these environments, or what advantages does it have for businesses compared to telematics meeting platforms, such as Zoom, that have been used during the pandemic? “Immersion in these metaverse worlds causes much higher social interaction than Zoom or other meeting spaces. And technology blockchain With which it is created, it allows doing business and transactions safely ”, explained Salomó.

However, those responsible for CatVers have not been able to specify two key aspects of this project: the initial investment and the companies and entities that have shown interest in participating and using the virtual environment. “There is a lot of interest”, has limited himself to commenting Salomó. The CatVers is launched this Monday for free but at the end of February its use will be subject to rates that have not been specified either. “The objective is that in due course it will be self-sustaining with the income it will generate. At the moment the initial investment is not very large, only a few thousand euros “, said Salomó, who added that” it is not ruled out that they can be used tokens, own currencies of the metaverse, to make transactions ”.

Salomó, as president of Home Meal Replacement, the parent company of the Nostrum prepared food chain, announced at the beginning of 2018 the launch of its own digital currency, or cryptocurrency, with which it intended to obtain financing to expand its business. The plan failed and a year later he was fired after Nostrum presented a bankruptcy. In September 2020, the then president of the Barcelona Chamber of Commerce, Joan Canadell (now deputy of the Junts in the Parliament), appointed Salomó president of the Blockchain Center of Catalonia, an entity created by the hand of the Chamber and the department of Digital Policies of the Government. Puigneró explained this Monday that the center has a public budget of 400,000 euros for this year. “The Government of Catalonia has an obligation for innovation to be an instrument for creating talent. For this reason, a year and a half ago we decided to create the Blockchain Center ”, said the vice president of the Catalan Executive, through his avatar.

Christopher Acosta will appeal the judge’s decision, while the defense of César Acuña was satisfied with the sentence