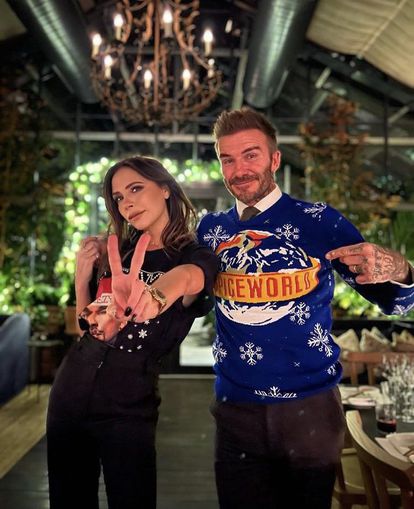 David and Victoria Beckham, in Christmas jerseys (he, with one of the Spice Girls), in December 2021.victoriabeckham / instagram / BE (BE / Cordon Press)

The life of the Beckhams seems to border on perfection, at least from what they publish in the not always realistic social networks. Handsome, rich, famous, happy and together, the whole family has spent the Christmas holidays in Florida, where David, Victoria and some of their children are settled for much of the year, since he is the owner of the soccer club Inter Miami, in which his 19-year-old son Romeo also plays. And now, a few days after the meeting, they have decided to publish the idyllic images of the holidays on their social networks.

Victoria Beckham was the last to hang a photogallery with several images that show their adventures, a series of photographs that in less than a day is close to 700,000 I like it. In the first of the images the couple is seen drinking what looks like a cocktail, while in the others their children, Brooklyn, Romeo, Cruz and Harper are seen enjoying their vacations on the beaches and on a yacht, as well as in what restaurants and resorts look like. “Creating family memories in the sun. Kisses ”, the designer has written to head the gallery.

The six have not been alone. The family nucleus has been joined by the two girlfriends of his two oldest children. On the one hand, Nicola Peltz, the already fiancée from Brooklyn, a 27-year-old actress who is the daughter of ex-model Claudia Heffner and the billionaire business magnate Nelson Peltz, former owner of Snapple drinks and who is estimated to have a net worth of 1,500 million euros. Precisely these days the young woman has celebrated her birthday and her mother-in-law has also congratulated her through Instagram with a photo of the young woman with Harper Seven.

In addition to Nicola Peltz, Mia Regan, known as Mimi, the footballer’s girlfriend and incipient model Romeo, has also accompanied them during the Christmas holidays. In fact, the young model herself has published a multitude of photos of those idyllic vacations sailing through transparent waters, bathing and finding starfish with the Beckham family.

The Beckhams have been joined by the Adams, Victoria’s family. Their parents, Jackie and Anthony, have also spent these days with them and have posed with their grandchildren, especially with Cruz, who has joked taking pictures with them at a popular burger joint. They have also been joined by another popular clan member: Libby Adams, the 22-year-old niece of the former Spice Girl, daughter of her little sister, Louise. Libby – actually called Liberty and trying to build a career as a photographer, especially in the field of fashion, just like her cousin Brooklyn – has also posted photos of those vacations for her more than 63,000 followers on Instagram.

For more than 25 years, the Beckhams have known how to channel the media attention that reported to them, first, that Victoria was a member of one of the most famous musical bands in the history of the United Kingdom and, later, that David became one of the most successful footballers of his time. Their careers have evolved over the decades, as has their family life, always in focus. Now, over the years, they have managed to turn their own children and their family nucleus into stars, creating a dynasty of fame and wealth that has traces of extending over time. His next big event will be the Brooklyn wedding with Peltz, one more event that will become another peak of interest for a family that has never stopped generating it.