Can a summit resolve the ‘worst crisis since the Cold War’? 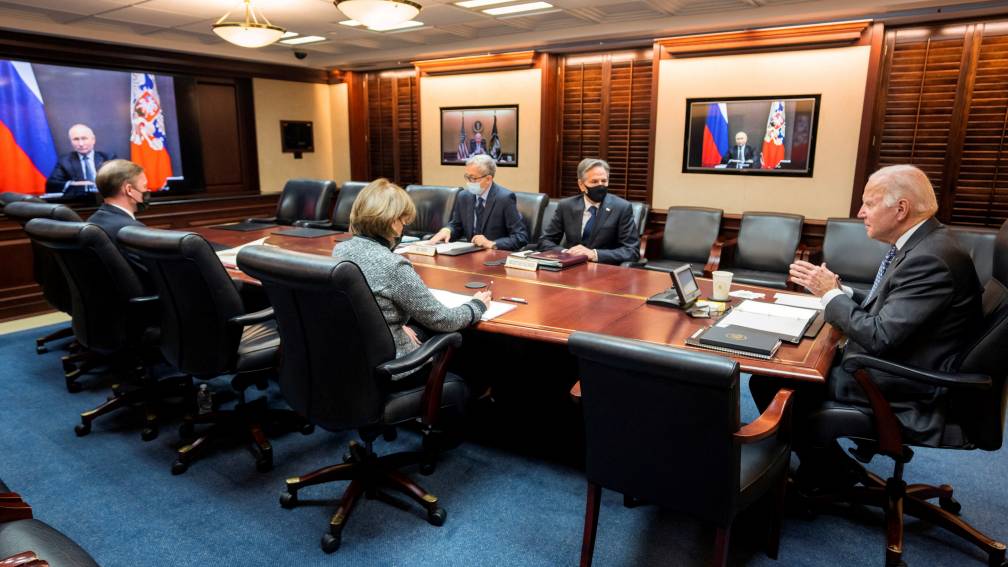 Thirty years after the end of the Cold War, history seems to be making a comeback. The West and Russia are diametrically opposed in Eastern Europe, where the situation around Ukraine is particularly worrisome at the moment.

In recent months, Russia has stationed tens of thousands of troops on its border with Ukraine, raising suspicions that the country is preparing an invasion. America threatens severe sanctions if Russia invades Ukraine.

A series of talks in which Russia and America are participating are planned this week to prevent words from being traded for weapons. Analysts speak of the most worrisome crisis since the Cold War and believe that next week could have far-reaching consequences.

What are the requirements of the different parties?

Russia sees influence in Ukraine as an important goal, but perhaps even more important is to stop NATO. That organization was founded in 1949 to form a Western front against the Soviet Union. Russian President Putin sees NATO and especially its potential eastward expansion as an existential threat.

NATO sees Russia’s military interventions in neighboring countries, and in particular the capture of Crimea from Ukraine in 2014, as proof that military cooperation is still necessary after the Cold War as a defense against Russia. After 2014, therefore, weapons and NATO soldiers were stationed in the Baltic States and Poland.

While Russia previously considered it unacceptable that there would be a NATO presence in non-member state Ukraine, the demands have expanded in recent months. Russia now wants NATO to stop stationing troops in all countries that joined after 1997. That amounts to all Baltic, Eastern European and Balkan members of NATO. NATO must also commit that Ukraine and other ex-Soviet states will never join NATO.

Also watch this video about Russia’s troop build-up on the border with Ukraine:

The US and NATO want Russia to de-escalate tensions by stopping deploying troops on the border with Ukraine. They also believe that Russia has nothing to say about who joins NATO.

The fear is that Russia will launch a military invasion of Ukraine if the demands are not met. If that happens, the US and NATO will probably not intervene militarily right away. They threaten with sanctions, such as cutting Russia off from the SWIFT system that processes international transactions between major banks, an embargo on the sale of American products and technology to Russia and the arming of Ukrainian combat groups that can then wage a guerrilla war against Russia. . Russia says it will cut all ties with the West if such sanctions follow.

What do analysts expect from the talks?

In any case, a quick deal seems unrealistic given the requirements, analysts say. For the West, the ideological underpinnings of NATO would be called into question by far-reaching concessions, for Putin the legitimization of his stance against the West.

That is why NATO finds it unacceptable that no more NATO weapons and soldiers should be stationed in some member states: “There can be no situation where there are second-class members of NATO that we as an alliance are not allowed to protect”, according to NATO. Secretary-General Jens Stoltenberg.

Russia on the other hand is also taking a risk. Putin has for years portrayed NATO as the main threat. The country feels it needs buffer states that it can influence to prevent an invasion of enemies.

How does Putin view Ukraine, Eastern Europe and NATO? NOS on 3 explains:

That history is still very much alive in Russia, writes geopolitical strategist George Friedman. In addition, Western-oriented democratic neighbors would be a nightmare for Putin, according to historian Anne Applebaum in The Atlantic: “What if the Russians become jealous of their Ukrainian neighbors? What if they decide they want such a system too?” In addition, there are old emotions at play with Putin, she says. Putin sees Ukraine as a historical part of Russia and Ukrainians and Russians as one people. He even wrote a 6000-word essay about this last year.

If Putin gives in, the question is how seriously others take his strong words about NATO and Ukraine. But, analyst Pasi Eronen of the Conflict Studies Research Center told CNN: “Putin is an aging autocrat obsessed with the legitimacy of his rule and the failure of the Soviet Union.” Especially now that the economy is going bad, he is looking for justification for his presidency in geopolitical issues.

However, if Putin does not make concessions and invades Ukraine, he risks a protracted conflict and severe sanctions, with dire consequences for the Russian population.