LEGO statue of André Hazes after ‘kidnapping’ back on Dam Square 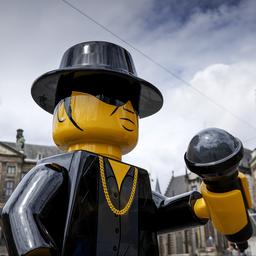 The LEGO statue of André Hazes is almost two weeks after his ‘abduction’ back on Dam Square in Amsterdam, city broadcaster AT5 reports. It was brought back by De Geitefok, a Frisian New Year’s Eve association that took the statue with them on December 27 as a New Year’s Eve stunt.