In Bosnia, Serbian nationalists dream of secession: “Here we are in Republika Srpska, 100%” 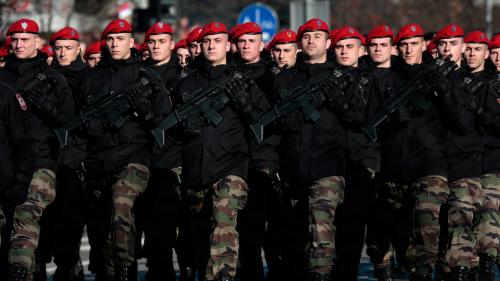 Thirty years ago, the small mountain town of Pale, 15,000 inhabitants, became world famous by becoming the capital of the Bosnian Serbs, during the four years of the siege of Sarajevo led by these same Serbs, about ten kilometers away. Where is. On January 9, 1992, the Republic of Bosnian Serbs was proclaimed, the outcome of a series of political decisions and the refusal to see the birth of the independent Bosnia-Herzegovina of which the Bosnians and the Croats dream.

Despite the war, which claimed more than 100,000 lives, Nikola, a 60-year-old retiree, is proud of the anniversary. “Here we are in Republika Srpska, 100%. All the people here are Serbs and always have been.” This anniversary is celebrated with great pomp, Sunday January 9, in Banja Luka, the de facto capital of the Serbian Republic of Bosnia, with a parade of police forces. A show of force by the Serbs seen as a provocation by the Muslim Bosnians.

They are worried since the Serbian ultranationalist leader, Milorad Dodik, passed a series of laws aimed at separating the Republika Srpska from the federal state of Bosnia and Herzegovina. Nikola agrees with these decisions. “I think secession is the easiest way to solve our problems, assures the retiree,” but it will not be done by waging war. Those who invoke it do so simply because they do not want to solve our problems . “

The Serbian nationalists have announced that they want to leave, within five months, three central institutions in Sarajevo, the army, the judiciary and the tax authorities. “I don’t think this attempt at secession will bring anything positive,” said Milena, a 38-year-old special education teacher. She fears a return of intra-community violence in the country, and adds that she has “already lived through a war, and does not want to know another.”

For many Bosnians, the current tensions are above all aimed at making people forget the corruption scandals and the economic problems that the country, which is particularly stricken by poverty, is experiencing. “People are already wondering every month how they are going to survive with this economic situation,” says Milena.

“Getting bombarded with the word war on TV all the time is really depressing.”

The American authorities took financial sanctions on Wednesday 5 January against Milorad Dodik, supported by Russia, and accused of “threatening the stability” of the region with his separatist project. But for Hamet, a resident of Gorazde, a predominantly Muslim town in the Republika Srpska, these sanctions are insufficient “against those who want to destroy Bosnia and Herzegovina, especially against Serbia and Croatia. All this cannot continue without a real risk of conflict.”

In Sarajevo, some commentators already see 2022 as a pivotal year, with no illusions about the possible influence of the European Union, even more divided than thirty years ago in the face of new tensions in Bosnia and Herzegovina.

In Bosnia and Herzegovina, the concern of residents about the secessionist wishes of the Serbian government – Report by Louis Seiller