Why the Chinese container is the most pop of Spanish gastronomy 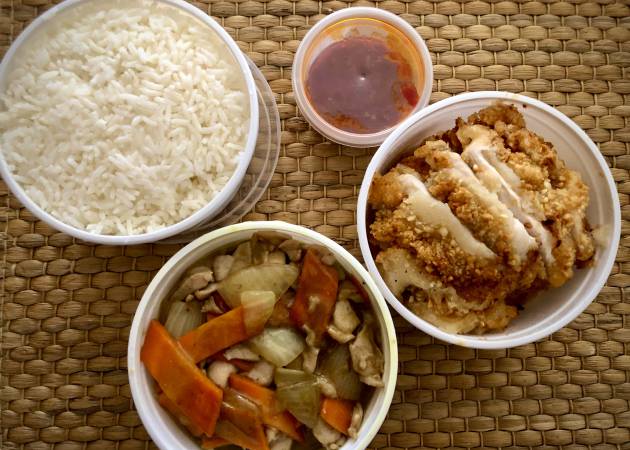 The Chinese container, that round white plastic container with its fragile transparent lid, has been our national Campbell soup for decades. Someone among us with art, someone like Paula Bonet or Paco Roca or Cecilia Giménez, should represent that polysemic container and hang it in a museum, Thyssen or Reina Sofía as Andy Warhol did with the tomato can in 1962.

Chinese food, and its mundane taper as a revolutionary symbol, make up the first pop food that Spain knew when that guy with the dark mustache died. Spain did not become pop at the table with Karlos Arguiñano or Ferrán Adrià, but with hundreds of Chinese emigrants from the Zhejiang province to whom we have not yet recognized their contribution to our culinary history. And it is time to praise its iconic taper as our fraternal link with the People’s Republic.

Chinese food was the first mass food, standardized and replicated as a photocopy that we Spaniards and Spaniards forged with our tastes and purses between 1970 and 1990, that is, between the burial of the dictator and the expenses of Cobi, Curro, Filesa, and what Bárcenas and the Real brass band would bring behind. Before hamburgers, pizzerias or kebabs, before the current pop manducas with replicating sapidity and aesthetics, Chinese food rose to prominence in Spain as a contemporary sign of a revived country that stopped embracing streetlights and trenches to wrap yourself in the European constellation and the factory delights of modernity.

The prophet of the sweet and sour pork

The Chinese, like Mediterranean Phoenicians, gave up nationalistic trifles to please our cosmopolitan desires with a disguise. And be careful, we are not talking about just any kitchen, but the one considered oldest, wide, diverse and sophisticated. of the planet. The gastronomy that even their eternal enemies of the border, that is, the Japanese, recognize as superior in their best works, in the case of the exquisite novel The Gourmet Club (read it, or take a look at the sophisticated series Flavour Origins, de Netflix).

Chen Diguang He opened the Great Wall in Madrid in 1977 and turned that hotel fortification into the first chain of Chinese-Spanish restaurants, in the consolidation of a phenomenon that would have left Franco’s mostachin completely thin from the shock. Between 1970 and 1990, with the laborious silence of Confucius, establishments with dragons and hanging lanterns flourished in cities and towns, from where they spread chicken with almonds, delicious rice or spring rolls in any population nucleus that gathered at least 8,000 new democrats in the radius of action of their plows. The market swelled and literally saturated: at the end of the 20th century there were more Chinese restaurants in Spain than regional ones. “To the point that more than one person has ever thought that they were franchises, when in reality they are small family businesses with no direct connection.”

Because they are the ones who have saved our neighborhood bars

“From 2007 to 2009 approximately 26,000 bars, cafes and restaurants were closed in Spain due, in part, to the economic crisis and, in part, to the lack of generational change”, collect Joaquín Beltrán and Amelia Saiz. As they already did in the textile industry, also without national relief, Chinese businessmen filled the gap, only now “maintaining the initial offer, since the bar’s clientele is accustomed to a type of service that does not want changes, but rather to maintain their habits. ”. The promoters and current employees belong to the second generation, they were born here, they speak Spanish, they know how to relate better than their parents. They are indisputable Spanish. Or almost.

“The person of Chinese origin stops acting and representing the Chinese to become one more, although his role is still subordinate, of service. At the moment, it is a step forward towards his indistinguishable citizenship card ”. Menu that deserves a long time because, in addition to introducing us to pop food, now they maintain our traditional street gastronomy. They have, in short, feeding us for half a century (apart, by the way, they also make real Chinese cuisine).

The citation and data in the previous paragraph are from Joaquín Beltrán and Amelia Saiz López, researchers from the Autonomous University of Barcelona (UAB) and authors of the study From the Chinese restaurant to the local bar. Evolution of entrepreneurship of Chinese origin in Spain and its complex relationship with ethnicity. Read it too: it tells more about our society than any electoral program. The two teachers rigorously explain the origin of the delicious triad and its subsequent expansion, which precisely begins with the circular container. With our turn-of-the-century clay pot.

At home and beyond

The Chinese not only provided us with Andy Warhol’s wild imagination, but they fostered the second attribute of pop gastronomy: mobility. The combo of tapers, with a small one for the sweet and sour sauce, the rolls wrapped in aluminum foil and stacked all in a plastic bag, was our first delivery to the house. The middle class giving themselves the luxury of not cooking, eating food from distant countries. The service at the doormat was doubly clever when, in the late 1990s, with the bricks and balls full, going to a restaurant-pagoda began to be branded as an outdated, almost kitsch habit. If you ordered the beef noodles over the phone, the neighbor who was showing off in the elevator that he had bought a nitrogen siphon wouldn’t know that you were maintaining your peregrine vices.

The shipment, however, was not enough to combat the bad image that in Spain inevitably acquires everything that becomes too general. We are a country of goats where we all feel like shepherds. So the bittersweet pork entrepreneurs began to rename their stores, changing Chinese for ‘Asian’, to expand the meridian, and probably knowing that a Hispanic schoolboy would not yet be able to differentiate the location of Cambodia and Mongolia on a map. The Pisa report, by the way, is not produced in Italy either.

The success of the mutation came with the definitive perversion of his identity, with the most inconceivable mobility in his passport. They sensed the nascent local passion for the rising sun and assumed rival nationality on their posters. Because most of the Japanese establishments in Spain are actually run by the same families: “The Japanese food restaurant run by people of Chinese origin is a complete twist on ethnicity, but has the complicity of the native customer, who does not really care who is serving them, but rather that the service satisfies their expectations of difference and otherness at an affordable price: Japanese is the place to eat sushi and Chinese for rice, three delights, that’s enough “, explain the two researchers from the UAB. We are that wonderfully simple.

The rise of the ‘wok’ responds to the same artifice -case of the pioneer Wok Directo de Málaga, created in 2004 by Zheng Gouguang with another chain format-, as well as many Vietnamese restaurants to new Spanish pop food is still in the hands of its inventors, specialists in finding possibilities to earn a living. In The Adventure of the Ladies’ Toilet (2001), Enrique Mendoza’s mindless detective runs a hairdresser located in front of a Siau family bazaar. Hairdressing and bazaar: two businesses that have occupied the main diversifications of the Chinese business community. A decade later, in The Tangle of the Bag and Life (2012), the Siau make an offer to the protagonist to buy his dilapidated hairdresser and turn it into a bar. And in The Secret of the Missing Model (2015), the agilipollado hound already works as an employee for his entrepreneurial neighbors.

The triumph of the three delights

Who has not had a rice container with diced ham, French omelette, green peas, minimal prawns and carrots in the refrigerator? Who when seeing it has not felt like a cabin boy of Marco Polo? And who has not reused that container after slicing it with sweet and sour sauce or bamboo shoots? The landscape of our refrigerators is the mirror of our moods, as Manuel Vázquez Montalbán wrote, as well painted the stoic Antonio López, as well described in his bizarre novels Eduardo Mendoza. From that perspective, the reflection of the Chinese container projects as much sociology as the gulf paella for tourists.

The three mandarin rice delicacies, which were actually five -because even the number did not matter in the trompe l’oeil-, made with absolutely oriental ingredients, plus its simple universal container, synthesize the stomach transit to the pop culture of a country that, Paradoxically, it has not yet managed to turn its own cuisine into an exportable standard, as Italians and Mexicans have furiously globalized. Why don’t we have Spanish restaurants clearly identifiable by half an orb? Perhaps because we take food to heart as much as the vote: without giving a stir-fry in what we consider genuine. And so it goes.

We have popularized the word “tapas”, but not representative tapas that are equally recognized in Peru, Tibet, Japan or-on-Easter-Island. We throw our hands to the bald when we see the recipes of our village adapted beyond our borders. We are unable to create new symbols, because we still waste our after-hours arguing about the flag.

To create our first pop food, then, we had to resort to a stratagem, a social self-deception, a dual nationality; to something that we did not understand as our own, although it was more idiosyncratic than the cachopo. A Chinese chef had to attend to the taste and international dreams of the Spanish client to illuminate our first consumer menu. The result: a gastronomy arising from fragmentation and decontextualization, of the game and the frivolity. A mass entertainment, quickly manufactured and cheap; despised by academics, but successful. And an icon, with its infallible white plastic container. Or put in three words: pure pop culture.

Who was the first?

Our first Chinese opened in Barcelona with the name Big dragon, supposedly in 1958. Although this mark remains controversial: Shanghai, in Rota, inaugurated in 1968, claims to have arrived the first. Madrid, in 1974, saw the doors of The Happy Buddha open, names taken from a Bruce Lee film, because not in vain some place the beginning of this emigration in the filming in 1963 of the film 55 days in Beijing, which brought the outskirts of the capital to half of the Chinese immigrants from Europe, to act as extras. The first Chinese to “He emigrated directly to Spain” was the aforementioned Chen Diguang, responsible for the chain manufactory menu and son Chen Tse-Ping, in turn husband of the starlet Manolita Chen.

These pioneers were the seed of homogenized restaurants that would soon proliferate, absorbing the arrival of compatriots with an easy-to-learn and profitable trade. On February 5, 1978, El País Semanal dedicated its cover to The silent dragon. Chinese in Spain, confirming the implantation of a new community. In that report appeared another of the names responsible for our first pop food: Peter Yang, promoter priest of the Great Dragon and inventor, according to legend, from the local spring roll, different and much bigger than the original. The collection of names is completed with Miguel Shiao, author of Cookbook of Chinese cuisine, with ten editions between 1976 and 1989 and an extension in 1990.