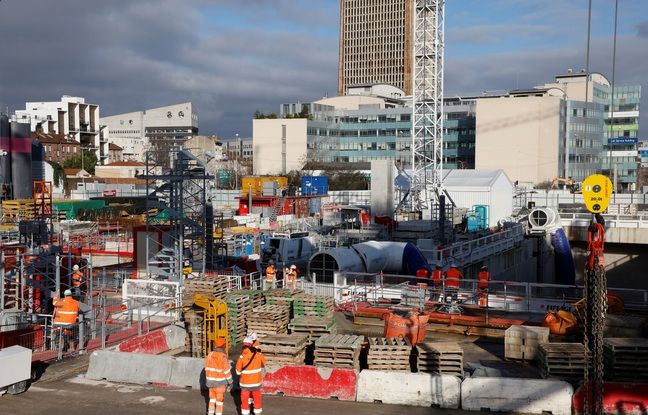 “Never again”, claims a press release from the CGT 93, after the death last Wednesday of a worker on the site of the future Saint-Denis-Pleyel metro station. The union denounces “hellish rates, now even on Sundays, and a context which raises fears of other such unbearable accidents”.

This fatal accident is indeed the second in just over a year on the Grand Paris Express site after the death of Abdoulaye Soumahoro, 41 years old, fell into a concrete mixer on December 22, 2020. This time, the victim, born in 1961, was apparently cleaning the area when she received a steel plate of about 200 kg fallen from the upper floor to about 7 meters in height, indicates a judicial source with 20 Minutes. The latter adds that an investigation for facts of manslaughter has been opened and that the investigations have been entrusted to the Saint-Denis police station.

Responsibilities to be decided

The employee, probably temporary, according to this legal source was employed by Eiffage, which had also hired Abdoulaye Soumahoro on a permanent contract for the construction site. The French construction and concessions group did not wish to respond to our requests. Nevertheless, according to Le Parisien,
the plate would have fallen from a place where a subcontractor was working. Several companies and subcontractors being present on this site, it will be a question of determining the responsibilities of each zone, specifies the judicial source. “Structurally, the construction giants have a way of organizing things with cascading subcontracting which is accidental”, denounces Kamel Brahmi, secretary general of the CGT 93.

For its part, the Société du Grand Paris (SGP) assures us that following this accident “new instructions were immediately issued to alert all the stakeholders concerning the fixing and the size of the plates obstructing the hoppers (vacuum at level of a floor allowing equipment to be lowered) ”. More generally, the SGP has “made safety the first priority of all actions in connection with the Grand Paris Express”. It thus had a “site safety” charter incorporated into service contracts. “Going beyond legal obligations, this charter incorporates recommendations from the referent bodies in the field of work concerned”, specifies the SGP.

The pressure of deadlines

But Kamel Brahmi “fears other tragedies”, because of the constrained delivery times of the site. “The closer we get to the Olympic Games, the more pressure increases on the shoulders of the workers,” he says. On which the SGP defends itself: “In any case, the security […] is an adjustment variable for meeting schedule goals. “She cites in particular the stopping of all construction sites at the start of the first confinement” to favor security “.

While the SGP still does not know when the work can resume, Kamel Brahmi calls for better consideration by the construction companies of the experience of workers on safety issues. He also asks that the labor inspectors of Seine-Saint-Denis be able to access the sites, access currently reserved to a specific pole of the labor inspectorate but “lacking human resources”. If he concedes that there are “inevitably more risks in the construction industry”, for him, “we must not die at work”.