Crisis in Kazakhstan: between diplomatic alliances and strategic interests, why is Russia intervening?

“The counterterrorism operation continues, the militants have not laid down their arms. Those who do not surrender will be eliminated.” Kazakh President Kassym-Jomart Tokayev further intensified, Friday, January 7, the violent repression of the protest movement that has shaken his country for a week. He authorized the security forces to “shoot to kill” in order to quell the riots and ruled out negotiating with the demonstrators. To crush the demonstrations, the power can also count on the arrival of a contingent of Russian troops and other countries allied with Moscow.

This intervention worries the United States, which has warned Russian troops against any violation of human rights or any attempt to “take control” of the country’s institutions. But why did the Kremlin decide to deploy troops to Kazakhstan in just a few hours? What interests does Russia have in the country? Response elements.

Because his Kazakh ally asked for help

The dispatch of Russian troops to Kazakhstan is part of the deployment of a “collective peacekeeping force” of the Collective Security Treaty Organization (CSTO), a group of six states born after the fall of the USSR. A first contingent of 2,500 soldiers arrived on site Thursday, January 6. Its mission will be to “protect state and military installations” and “to help the Kazakh security forces to stabilize the situation and restore the rule of law,” said the CSTO. This deployment will be limited in time, adds the New York Times (article in English). 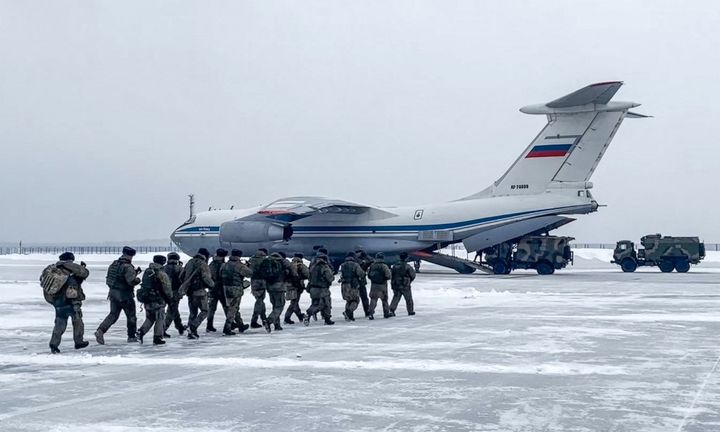 Russian paratroopers board a plane bound for Kazakhstan on January 6, 2021, in Moscow. (RUSSIAN DEFENSE MINISTRY / AFP)

According to Washington Post*, this is the first time that the CSTO has carried out joint military action since its creation. “During the crisis in Kyrgyzstan in 2010, the country called on the Organization (…), of which Russia is the main actor, to help the government and they were careful not to intervene”, notes Jean de Gliniasty, research director at the Institute for International and Strategic Relations (Iris) and former French Ambassador to Russia.

In theory, moreover, the treaty can only be activated in the event of aggression by a third country. President Tokayev therefore justified his request by asserting that the protest, which began on January 2 in the face of the doubling of the price of LPG which supplies the majority of vehicles in the country, was led by “terrorists” supported and directed from abroad, reports the Guardian (article in English). The British daily notes that, this time, the intervention of the CSTO was decided “in a few hours”.

“Even if certain tensions have appeared in the relationship between Russia and Kazakhstan in recent years, the two countries remain very closely intertwined, analyzes Michaël Levystone, specialist in Central Asia at the French Institute of International Relations (Ifri), in an interview with L’Express (subscribers article). They are two strategic partners, within the CSTO but also within other important regional organizations, such as the Eurasian Economic Union (EAE) or the Shanghai Cooperation Organization (SCO). For Vladimir Putin, it is essential to avoid the collapse of Kazakhstan. “

Because Moscow has strategic interests to defend in the country

Moscow is not intervening in Kazakhstan just to lend a hand to an allied government. Russia “has very important interests” in its neighbor, recalls Jean de Gliniasty, from Iris. On the economic level, Kazakhstan is “its first trading partner in Central Asia, with an immense common border of more than 7000 kilometers”, adds Michaël Levystone, in the columns of the Point.

It is also at its neighbor, in Baikonur, that Russia has installed the gigantic space base from which it launches satellites and rockets. “That represents almost two or three French departments. It is an enormous territory with all the space installations”, details Jean de Gliniasty. Rented in Kazakhstan for “about 100 million euros per year” according to The crossBaikonur is governed by Russian laws and its currency is the ruble. It is essential for travel to the International Space Station as well as the development of space tourism, which Russia has recently embarked on. 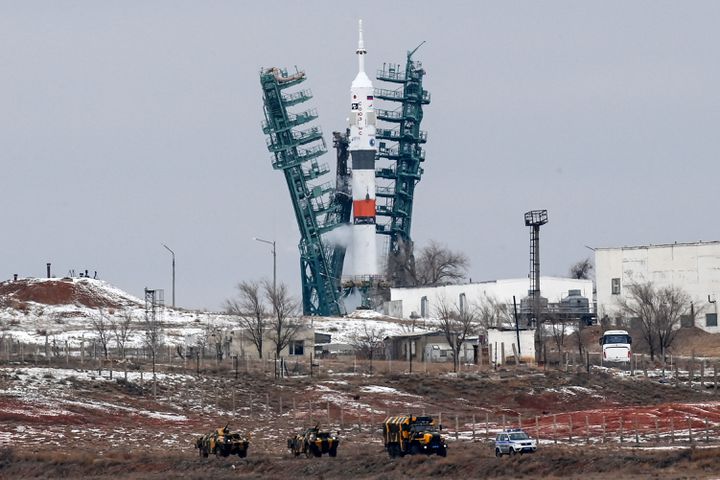 A Soyuz MS-20 rocket, with Japanese billionaire Yusaku Maezawa on board, is about to take off from the Baikonur base (Kazakhstan) on December 8, 2021. (KIRILL KUDRYAVTSEV / AFP)

With this military intervention, the Kremlin is finally defending cultural interests. Kazakhstan has a large Russian-speaking minority (18.5% of the population), mainly located in the north of the country. “There is, on the Moscow side, a desire to consolidate the Russian pole of influence in Central Asia that is Kazakhstan, underlines Michaël Levystone to L’Express. Regarding the language, there is a real fear of seeing Russian lose land in this country. “

Because the Kremlin wants to preserve its influence in the region

The Russian intervention in Kazakhstan is, more broadly, part of the strategy deployed by Moscow to maintain its influence with the countries resulting from the break-up of the USSR. Andrey Kortunov, director of the think tank named Russian Business Council, explains to the Wall Street Journal (article in English) that “the priority of the Russian executive is stability, the maintenance of the regimes favorable to Russia”.

“Since the end of 2020, Moscow has supported the Belarusian leader against a protest movement, stopped a war between Azerbaijan and Armenia and (…) massed troops on the border with Ukraine, which Russia had invaded eight years previously “, still recalls Reuters (article in English). Likewise, Vladimir Poutine wants to impose himself, with this military intervention, as a key player in the region. “If Tokayev owed his salvation to the CSTO, and therefore to Russia, this would effectively translate into renewed political influence from Moscow in Kazakhstan”, decrypts Michaël Levystone.

In a country which has been striving for thirty years to maintain its sovereignty over Moscow, the Kazakh president’s call for help is “a signal mainly sent to Russia which consists of pledging allegiance”, confirms to France 24 Marie Dumoulin, director of the enlarged Europe program of the European Council of International Relations.

“The result is that Tokayev, if he stays in power, risks becoming the puppet of Moscow. Just like Lukashenko in Belarus. It would be an evolution, because Kazakhstan has always been afraid of phagocytize. “

By trying to prove the power and influence of his country abroad, Vladimir Poutine also seeks to strengthen his own image, says Michaël Levystone. “There is probably a logic of external communication, aimed at telling his close allies that he does not allow disorder to develop at its borders, he explains to L’Express. It is also a way of send a message inside your country, showing that you should not hope to overthrow your own regime. “