Does football’s Europe despise the Africa Cup of Nations?

It is the story of a contempt that always has a good excuse. This year, European football – English to be precise – has chosen to make Omicron wear the hat of its aversion to the Africa Cup of Nations (January 9 – February 6). In mid-December, the European Association of Clubs (ECA) was worried, in a letter to Fifa, about the absence of a suitable medical and operational protocol for the CAN. Without the latter “the clubs will not be able to release the players for the tournament”, wrote the instance then, while the rumor of a cancellation of the competition was still running.

The turn is funny: if the Covid figures allow one camp to fear the other, it is certainly not the Europe of all daily records. “In the competition of bad faith, there are some Ballons d’Or”, ironically Claude Le Roy, winner of the CAN 1988 on the bench of Cameroon and always attack when it comes to defending African football. A little further north, at the Queen’s, the former English international Ian Wright is also asking questions. “We played our Euro through 10 countries in the middle of a pandemic and there was no problem at all, he remarked at the microphone of
the BBC. But Cameroon, only one country that hosts a tournament, suddenly it becomes a problem. “

The specter of a long-term absence

European football finally failed to derail the CAN 2022, which will kick off on Sunday (Cameroon – Burkina Faso), but not without pissing off the African neighbor in a final burst of panache. The clubs of the old continent, after making sure that there would be no quarantine on the outward journey as well as on the return, were thus able to release their players on January 3 at the discretion of an agreement between CAF and Fifa. . Six days of preparation, to be short, it’s short. “It’s rubbish, plague Le Roy.” We complained about the ten days of preparation for the 2022 World Cup. And there, we do even less than that. “ 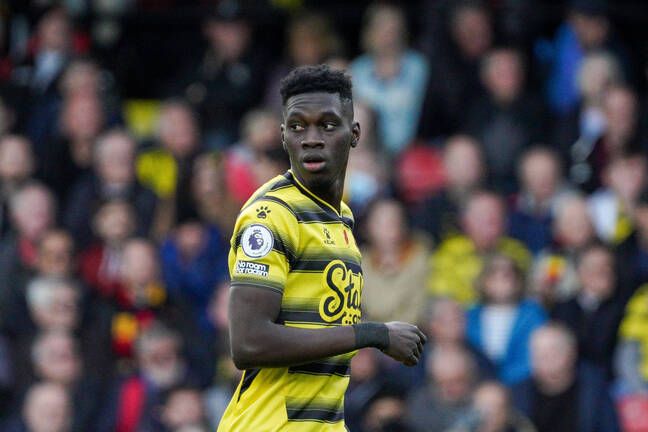 Ismaïla Sarr had all the trouble in the world to go to the CAN, but he was finally able to join Senegal after a standoff between his club Watford and the Senegalese federation – Richard Washbrooke / News Images / S / SIPA

“Is there a tournament more despised than the Africa Cup of Nations? », Asks Wright, who considers inappropriate the questions of journalists who are often tempted to subject players to the club / national team dilemma. What Sébastien Haller (Ajax / Ivory Coast) complained about in the columns of The Telegraph :

“This question shows the lack of respect for Africa. Would you ask this question to a European player before a Euro? Of course I’m going to go play CAN. It is the greatest honor. “

Haller nevertheless omits a detail, or rather the sinews of war: the Euro is played in summer without encroaching on the sacrosanct territory of the clubs unlike the African Cup, which had also fallen into line in 2019 and will return to its summer niche in 2023. Alain Giresse, coach of African teams from 2006 to 2019:

“Everything is caused by the placement of the competition in the calendar. Let’s say the World Cup is happening at the same time as the club competitions. Know a club that looks like it’s okay? That you go, that you are paid in the same way while they continue their championship? No, there isn’t a club in the world that would accept it. Because in absolute terms, we are always in a club versus national team opposition. “

The conflict between European clubs and African nations is not new, so that Claude Le Roy has no difficulty in going back a few decades to evoke certain baseness of Guy Roux, who became a master in the art of dodging the thorny winter problem.

“He had young people selected in France under 16 years old at the time when a selection among young people prevented you from applying to another nation as a senior, which was the case with Roger Boli [dont le compteur est resté bloqué à une cape chez les espoirs] for example. It was bogus selections among young people to prevent them from going. “

Dupraz applauds those who chose not to go

“I had discussions with English clubs, I am not telling you, remembers Alain Giresse for his part. There are clubs that put the pressure on and that I had to stand up to. The difference being that yesterday, only the coaches of the caliber of José Mourinho allowed themselves to piss off Le Roy to free Michael Essien as late as possible. But the demands of the clubs ended up increasing with time and threats too, as Morocco coach Vahid Halilhodzic recently regretted. “All the clubs are doing everything to ensure that the players do not come, some have threatened players, told them that they could lose their place, be transferred. “

The coaches of African teams therefore find themselves playing diplomats. Giresse: “In 2015, Sadio Mané was injured, he was in Southampton at the time. I accepted that he comes with his preparer. We integrated all that, we grafted the preparer to the staff to avoid a clash between the two parties. “This year, the Senegalese federation (FSF) managed to get Ismaïla Sarr off the ground after a standoff with Watford, the club having long tried to retain its player on the grounds of a knee injury contracted in November.

In France, Pascal Dupraz, new coach of ASSE engaged in a perilous maintenance mission, was laudatory towards Mahdi Camara and Zaydou Youssouf. Both preferred the Greens’ rescue operation to the CAN. “There are boys who we did not need to ask and who remain, who were selectable and who decided to stay at AS Saint-Etienne to get the club out of the rut. That does not mean that those who go to CAN are lost for good. But not far, anyway. “The players are annoyed to be caught between two waters. They are uncomfortable, ”regrets Alain Giresse.

The weight of the stars

Few, however, hesitate or reject the call for the Africa Cup of Nations. Le Roy: “They’ve been dreaming about it since they were little, they come as one man to play it. The CAN is more important for Africans than the World Cup. “A point on which European football does not yet seem to be up to date. The former goalkeeper of OM and Cameroon, Joseph-Antoine Bell, is satisfied to see African football players, players and coaches, start to claim the importance of their high mass.

But he expects more from the Premier League stars, “those who, even if they came into conflict with their clubs, would have three or four knocking on the door to get them back.” It is up to them to stand up to recall their attachment to their continent. Today, the Klopp, coaches like that, they are able to arrange playing time for South American players who have a lot of hours of travel for the national team without that being a problem. It should be the same with African players. “Proof that Africa football does not yet benefit from the same treatment as the others.