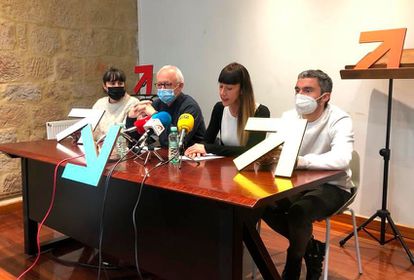 Representatives of Sare at the press conference held this Wednesday in Bilbao to present the mobilization of January 8 in favor of the ETA.SARE prisoners (Europa Press)

The environment that supports ETA inmates recognizes the improvement that the situation of the inmates of the terrorist gang has experienced during 2021, but demands that President Pedro Sánchez take more steps in prison policy because progress is being “extremely slow” . The Sare citizen network has demanded this Wednesday that an end to prison dispersal and the unblocking of prison benefits for inmates. These two demands will focus the mobilizations that the aforementioned platform has called for this Saturday in various towns in the Basque Country and Navarra and that for health reasons will replace the large demonstration that traditionally used to be held in January in Bilbao.

51% of the 194 ETA prisoners are serving sentences in prisons in the Basque Country and Navarra after agreeing to the transfer of seven ETA inmates during the last week of last year. The former Minister of Justice of the Basque Government Joseba Azkarraga, one of Sare’s spokesmen, has affirmed that the prison situation of the gang’s inmates presents “chiaroscuro” after the approximations approved during 2021, although he has demanded that the Ministry of the Interior be given improvements to “end the exceptional prison policy”. “There are still families who have to travel more than 800 kilometers in round trips to visit” the incarcerated prisoners, Azkarraga has assured. With the transfers granted during this last stage, since last summer no inmate of the gang has been serving a sentence in prisons located south of Madrid.

At the moment, a total of 81 ETA prisoners are held in the three Basque prisons, which are run by the Basque Government after taking over the competition since last October. 89 inmates of the gang have been transferred to this autonomous community, according to the latest count carried out by the Association of Victims of Terrorism (AVT). Azkarraga has avoided making an assessment of the transfer of the Basque prisons to the Executive of Urkullu because “it is still too early” to draw conclusions: “We will see if there is that positive evolution that we believe will occur, but we have to wait”.

This coming Monday it will be 100 days since the Department of Social Policies has taken over the management of the Basauri (Bizkaia), Martutene (Gipuzkoa) and Zaballa (Álava) centers. “We continue to trust that a prison policy will be carried out without exceptions, which is what we are asking for. We are not defending privileges for any inmate, what we ask is that there be no exceptions, that there be an ordinary prison policy for everyone ”, said the spokesman for Sare.

The mobilizations that will be held this Saturday afternoon in the three Basque capitals, Pamplona, ​​Bayonne (French Basque Country) and in other municipalities, will again demand the rapprochement of the prisoners “without exception and delay.” These demonstrations will also request the unblocking of progression from second to third degree, the enjoyment of prison permits and conditional release, as specified by the conveners. Sare has decided, as it did in January 2021, to decentralize the great Bilbao march for ETA prisoners due to the serious health situation in the Basque Country, with an incidence of the coronavirus runaway in recent weeks.

In addition, in the morning, Sare has organized a round table with victims of ETA, the GAL and the fight against terrorism, in which Rosa Lluch, daughter of the former socialist minister Ernest Lluch; Naiara Zamarreño, daughter of the PP councilor assassinated by ETA in Renteria Manuel Zamarreño; Robert Manrique, victim of the ETA Hipercor attack in Barcelona; Maider García, daughter of Juan Carlos García Goena, assassinated by the GAL in Hendaye (France), and Idoia Zabalza, Mikel Zabalza’s sister, who died while being detained by the Civil Guard at the San Sebastián Command.

Sare has reported that representatives of the PNV, EH Bildu, Podemos Euskadi and Podemos Navarra, as well as the main Basque unions, the office of the Basque Ombudsman and groups that work in defense have announced their attendance at this round table. from the human rights.