The ‘blackberry’ dies: signed the death certificate of the mobile that wanted to reign 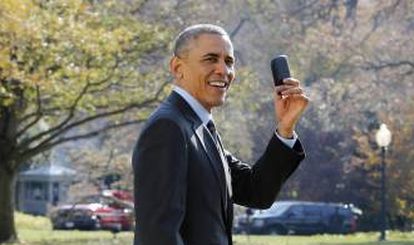 Barack Obama after recovering the Blackberry that he had forgotten in the White House before flying to Las Vegas in 2014. Photo: Getty

2021 marked the twentieth anniversary of the arrival of the first blackberry to Europe. The devices, which had been launched two years earlier in North America, swept here as they had there. “Spain is one of the countries where it is growing the fastest,” Dennis Kavelman, the former director of the Canadian company Rim, stated in EL PAÍS. It was 2005 and the executive was not worried: “We have heard many times about the competition, but no one has managed to replicate what we have achieved.” In 2010, nearly 19 million Americans were using the device, according to the statistics portal Statista. By 2021 they were just 200,000.

This Tuesday the definitive death of these classic telephones is certified. Starting today, devices with the BlackBerry operating system will lose access to basic functions such as phone calls, internet access or sending SMS. This includes devices from Rim’s golden age, prior to the company’s leap to Android in 2015. “We have chosen to extend our services to that date as an expression of appreciation to our loyal partners and customers,” explained the company in the statement that put on the calendar the last gasp of mobile phones with operating systems 7.1 or earlier, BlackBerry 10 and the not so award-winning PlayBook 2.1 tablets and their predecessors, which were discontinued a year after their launch.

What will happen to these relics? According to the company in a recently published reminder, network services will no longer be available: “From this date, devices that use these services and software either through their providers or through Wi-Fi connections will stop working reliably. This includes data, phone calls, SMS and emergency calls ”. Other proprietary applications such as BlackBerry Protect or BlackBerry Messenger may also stop working.

Thus, about thirty devices of different ranges expire: from the classic BlackBerry Curve, which became ubiquitous as of 2007, to the last device that carried the operating system of the house, the BlackBerry Leap of 2015. The seven years of margin that remain between the last launch and today indicate that there will not be many users who continue to use one of these phones and see how they are useless. And expect the drama to be even less for tablets. However, it is a highly symbolic moment, the last nail in the coffin of some devices that accompanied millions of users around the world and the definitive turn of a company that, after touching the sky in the smartphone market, decided to focus on solutions software and cybersecurity for companies and administrations.

The beginning of the end

Who Killed These Phones? As is often the case, it was time. The first blackberry They reached a very different market than the one they are now abandoning. At that time, the main competitors of these devices whose main claim was the possibility of sending emails and messaging to their peers were pocket agendas or also known by its acronym in English: PDA (personal digital assistant). In 2006, the consulting firm Gartner estimated the population of these almost forgotten gossip at 3.7 million units. That same year, The Economist defined the blackberry as “the device that all executives want to be seen with, and cannot live without.”

Then those smartphones began to emerge, that strange terminal without a keyboard that Steve Jobs introduced in mid-2007. The arrival of the iPhone marked the beginning of the end. According to experts, the Canadian never managed to adapt to the new era that led the Apple phone. A few months after the launch of the first cell phone from the Cupertino factory, Mike Lazaridis, founder of BlackBerry, still scoffed at the format: “Touch screens? Bah, they have been around for decades. We were thinking about it and we saw that the keyboard is more efficient, ”he stated in EL PAÍS. Not a year had passed when the BlackBerry Storm hit the market, which lacked a physical keyboard. The firm seemed to hold out for a time. Barack Obama himself came to the presidency of the United States wielding a blackberry.

In 2010, they put their own tablet to compete, unsuccessfully, with the iPad. Although the firm ended up easing its bets, its modernization efforts were late and insufficient. The loss of land and the cost it was having for RIM became evident in July 2011, when the company announced that it was preparing to lay off 10% of its workforce: 2,000 jobs eliminated to reduce costs when they still had 24.7 % of the market share compared to 38% of Android and 27% of Apple. New phones from the Canadian company kept coming to the market, but none managed to reverse the trend.

In 2016, the company also stopped manufacturing its own devices, and gave the Chinese company TLC a license to use the BlackBerry brand on new mobiles with and without a keyboard. The permit, which also did not achieve great successes, ended in 2020 and the mobiles that were manufactured during that period, already with Android operating systems, would have to continue to be supported at least until August of this year.