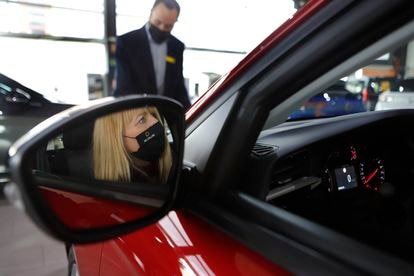 A woman checks the interior of a vehicle at a dealership in Terrassa.CRISTOBAL CASTRO

Vehicle sales remained depressed for the second year in a row in 2021. The persistence of the pandemic on the economy and, above all, the pressing lack of semiconductors that forced most of the European factories to cut their production prevented registrations They will come back with force. The brands sold a total of 859,477 vehicles. The figure represents a slight improvement of 1% compared to a year earlier, but is still among the worst in the last two decades and 32% below that of 2019, when the covid-19 had not yet erupted as a health crisis global. Whether the market can once again exceed one million units this year is anyone’s guess.

It will be different factors, consider manufacturers and sellers, which will condition this evolution. On the one hand, the recovery of normality in the supply of semiconductors, not foreseen until the end of the year. On the other hand, the recovery of the economy and, especially, tourism in Spain, which will activate car rental companies but also individuals if they are able to detect a temporary improvement. And the sector continues to emphasize the possible impact that an effective increase in the registration tax will have this year, at the end of the moratorium that limited the impact of the polluting emissions accounting system launched in the European Union in 2019. The concessionaire employers’ association Faconauto places its forecasts between 900,000 and 950,000 units for this year, while Ganvam, which brings together workshops, already expects full recovery for next year, 2023. Anfac, which brings together manufacturers, expects an improvement in the provision of microchips and European funds result in improved enrollment.

But the facts are that 2021, and also the month of December, was a bad year, barely improved by the effort made by car rental companies that, after not renewing their fleets in the first year of the pandemic due to the collapse of tourism, raised a 58% the purchase of cars, reaching 152,326 units. Companies purchased almost the same number of vehicles as a year ago (334,514, 2.1% more). But individuals continue to be the biggest problem: last year they bought only 372,637 vehicles, 12.8% less than a year ago. In this drop there are two elements to take into account: lower consumer confidence due to the economic situation and the inability of dealers to deliver all vehicles due to lack of stock. Faconauto ensures that dealers accumulate backorders that would exceed 200,000 vehicles.

“2021 has been a very rare year, but in my opinion the main effect has still been that of the pandemic, which is seen in sales to individuals,” says João Mendes, general manager of Peugeot in Spain, convinced that so that sales increase that channel has to grow. Patxi Azagra, director of the Honda division in Spain and Portugal, for his part, puts among cottons that purchases not made in the last two years are recoverable when the situation normalizes. “There is a retracted demand both due to economic issues and lack of supplies; Some of it will recover, but you have to keep in mind that consumer behavior is changing, so I don’t expect a rebound effect in 2022 ″, he says.

Where a change in attitude has been visualized is in the type of engines purchased, also influenced by the fact that the brands have strengthened in their sales networks the vehicles with greater technology, and price, to make profitable the reduction in production due to the crisis of semiconductors. In the last four months of the year, the less polluting engines – those ranging from pure electric vehicles to hybrids or gas vehicles – have had, as a whole, a greater share of penetration than gasoline, although these have ended the year as the best sellers, with 45% of the total. Diesel has been parked at 19.9%, although it is still a preferred technology for drivers who do more kilometers. Among the greener cars, hybrids continue to be the most sought-after alternative, possibly due to the deficit in charging points that Spain suffers. The electric ones only 2.7% of the market, with 17,925 units.

In order to increase the decarbonisation of the car park in Spain, the general director of Anfac, José López-Tafall, calls for a supplementary effort from the administrations. “We have increased the number of electrified models on the market and in production exponentially and we are leading the commitment to climate neutrality in 2050, but it is necessary that the mobility ecosystem also unfolds”, he says, to ask for “a true boost the demand for new vehicles, the installation of recharging points for electrified vehicles with public access and a new tax model that taxes the use and not the purchase ”.

The tax change, to merge the registration and circulation taxes, is already an old demand of the sector, which now sees the registration tax as an entrance toll to the acquisition of cars that slows the market. The Government has promised to present a proposal during the first quarter of this year, but the reform, which would affect the municipalities, seems complex. The president of Faconauto, Gerardo Pérez, is committed to opening his hand in the energy transition and giving clear support to diesel and gasoline cars as the fast track to the rejuvenation of the car fleet, which currently stands at 13 years on average , and decarbonization. “If we do not put all possible mechanisms in this energy transition, we are going to end up doing it for the rich and for the poor to pay for it,” says Pérez, who believes that if buyers had the peace of mind of being able to buy diesel and gasoline cars without a deadline, “they would buy them.” Raúl Palacios, president of Ganvam, regrets “the lack of political will” of the Government “to neutralize the increase in the registration tax, a scenario that makes us trust the recovery to 2023.”

The urban SUVs, the heaviest vehicles and those that consume the most, are, in any case, the ones with the highest sales. They accumulate 55% of the share of registrations in a year in which the best-selling brands were Seat, Peugeot and Toyota. Those three brands together with Volkswagen were the only ones capable of exceeding 60,000 vehicles sold during the year. The most successful models were the Seat Arona, Hyunday Tucson and Dacia Sandero, all of them in the best-selling category of SUVs.