Male contraception: why the pill (still) does not work for men? 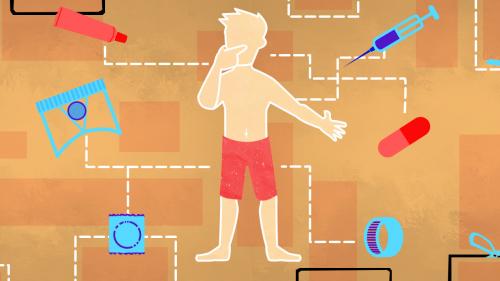 “It’s a bit like women who wear their bra. We forget it during the day and at night, when we take it off, we feel liberated.” Every morning, Guillaume, 29, plunges both feet into his contraceptive briefs without asking any questions. For eight months, this inhabitant of Toulouse wears, fifteen hours a day, one of his five “heated briefs”, although they do not produce heat. Composed of a ring attached to a harness, this device neutralizes the production of sperm by temporarily raising the testicles towards the abdomen, which warms them by about two degrees. At 37.5 ° C, difficult to hope to procreate.

With his unusual underwear, this almost thirty is an exception. Because in France, contraception is not really about the testicles. The practice remains overwhelmingly female: while the free provision of certain contraceptives has been extended to women aged 18 to 25 since January 1, for men, there is no official announcement. There are, however, a few techniques which find a favorable echo within Guillaume’s generation, marked by the controversy over third and fourth generation pills in 2012 and more receptive to the sharing of contraception within the couple.

As much to say it from the start, the male pill is far from arriving in pharmacies. A hormonal method has indeed existed in France for forty years, in the form of a weekly injection of testosterone enanthate into the muscles. But very few doctors prescribe it. The model of “heated briefs” used by Guillaume is not recognized by the World Health Organization (WHO), nor by the Ministry of Health. Same fate for the andro-switch, a silicone ring in which we introduce his penis and scrotum. Mechanically, the testicles rise and are at body temperature, which blocks the production of sperm.

There remains the use of condom and vasectomy. The latter involves cutting or blocking the two vas deferens during a surgical operation, which prevents the passage of sperm to the penis. A four-month cooling-off period is required between the initial request and sterilization, specifies the High Authority for Health (HAS). It is considered “not very reversible” because a restorative operation remains “possible” but its result is “random”, according to the HAS.

So why, despite these possibilities, does contraception not turn men on? First, the weight of traditions still seems to place this burden on women. If Guillaume, “militant and feminist”, sees in his approach “a sharing of the contraceptive burden” within his couple, male contraception only interests “15% of men in France”, reports INED in an article dealing with legal contraception in France, published in 2017.

For the authors, public health researchers at Inserm, this imbalance finds its roots in particular in France’s natalist policy, which reached its peak in 1920 with the ban on the sale and promotion of contraceptives. However, despite the Neuwirth law authorizing contraception, passed in 1967, and the Veil law on voluntary termination of pregnancy (abortion) in 1975, the scars of this policy remain.

On the other hand, with the pill and the IUD, sold in pharmacies and on prescription, the patient-doctor relationship has taken precedence over discussion between partners, thus relieving men of responsibility. Consequence: today, in sex education classes, “young women are made aware of contraception and the risks of pregnancy and young men on sexually transmitted infections (STIs)”, deplores Erwan Taverne, co-founder of the Garcon association (Contraception action and research group) and defender of the “heated briefs” method.

As a result, male contraception remains unknown. According to a study published in the journal PLOS One in May 2018, “only 10% of new fathers know the hormonal male contraception and only 3% the thermal method”. According to estimates from the Association for the Research and Development of Male Contraception (Ardecom) and the vasectomy-information.com website, around 10% of men have a vasectomy in Europe and the United States, and almost 20% in the UK. In France, the number of operations has nevertheless increased from “1,500 in 2010 to 7,500 in 2018”, observes Doctor Jeanne Perrin, professor of biology at the University of Aix-Marseille and co-author ofa study on the subject published in the journal Human Reproduction in 2021 (in English).

The methods are still “taboo” and “very little known”, confirms Marianne Niosi, director of family planning, in an interview with franceinfo. “When you look in the media or even in terms of public health campaigns, in fact, there is very little information on it,” she argues.

Even the medical profession sins on the subject. When he decided to ensure his contraception, Guillaume had difficulty finding a doctor who followed him in his approach. “I met an andrologist [spécialiste des pathologies de l’appareil génital masculin], who had never heard of this type of contraception, “laments the young man.” Only 23% of gynecologists and general practitioners that we questioned know about male thermal contraception and this rate drops to 10% with contraception hormonal, underlines Jeanne Perrin. More than half of them have never offered male contraception and, when there is a proposal, most of it comes from female practitioners, ”she explains.

Moreover, even when it is known, this practice remains restricted by certain received ideas. The anxiety of the operation, perceived as a castrating experience, hangs over vasectomy, while it is performed on an outpatient basis and generally under local anesthesia.

“Men are afraid of losing their manhood, of not having an erection, while a vasectomy does not change any of that.”

“We have a culture, among doctors, of a vasectomy seen as a mutilation. Our urologist fathers never taught us. It was forbidden!” noted in 2017 for franceinfo Didier Legeais, president of the union of French urological surgeons.

Sometimes, doctors are also reluctant to practice on young men an almost irreversible surgical technique, like Doctor Antoine Faix, urological surgeon in Montpellier and member of the French Association of Urology (AFU). “These men present themselves as being eco-responsible, not wanting children and argue their right to have a vasectomy, relates the specialist. I answer them clearly ‘no’, because they are young and the chances of their return. fertility are low. ” This medical refusal can be issued without any justification during the first consultation, according to Article L.2123-1 of the Public Health Code.

If the alternatives to the condom are not popularized, it is also because research has remained sluggish on the subject for half a century. “Medicinal male contraception does not exist anywhere in the world, there are only phase one or two trials”, notes Dr Antoine Faix.

“In terms of research, we are fifty years behind, society is more advanced than the scientific world on the subject of male contraception.”

One of the most advanced leads concerns the Vasalgel. It is a hormone-free gel injected into the vas deferens, and which blocks the passage of sperm. This method does not require an incision and is presented as “less irreversible” than vasectomy, according to the American foundation. Parsemus, at the origin of the project. Other teams of researchers have been working on male pills for decades, without success for the moment.

However, funds are running out to develop these projects through clinical trials. On the one hand, “research is increasingly difficult when the issues do not relate to public health”, notes Antoine Faix. On the other hand, the safety standards are “much higher” than those of the 1970s. “Today, the tests are stopped as soon as side effects such as mood disorders, acne, decrease libido appear, explains Dr. Jeanne Perrin. And then, the laboratories consider that there is no market, because there is no demand. ”

As for research on thermal methods, the pitfalls are the same, regrets the specialist. With the team of Doctor Roger Mieusset, andrologist at the Toulouse University Hospital and father of the “heated briefs”, she repeatedly requested funding to test this contraceptive on a large scale. “But every time, the answer is the same: ‘This is not a priority’.” Hence the lack of certification and recognition by the health authorities of the “heated briefs” or the andro-switch. With his morning routine, Guillaume may well remain an exception.